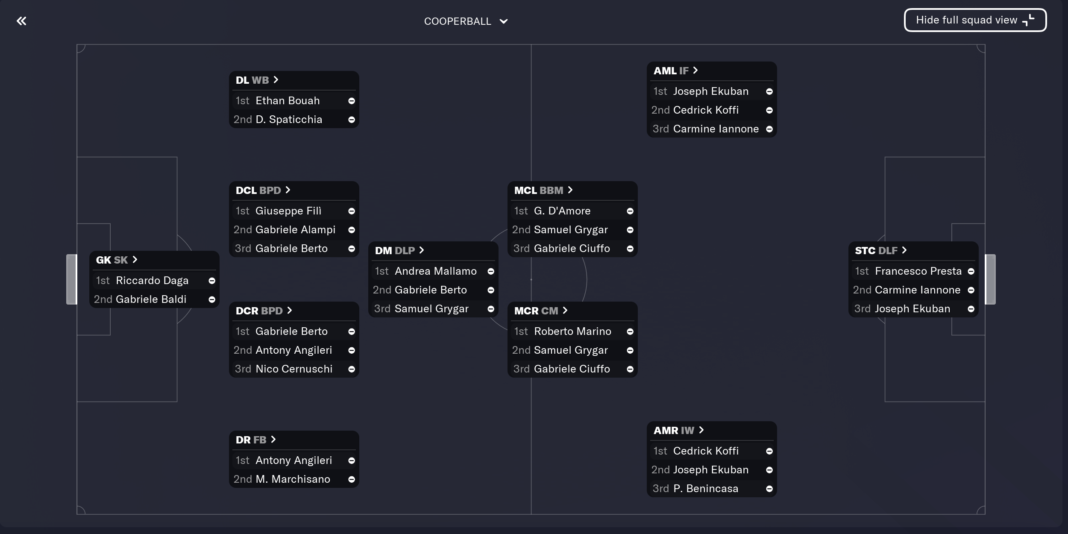 So here we are again.

And I am going to be bold enough to say…. the books are balanced!

How has that broken down?

I managed to get rid of Crea and Quartarone – and then Marchesi kept pushing to leave so I let him go as well, once I had lined up a replacement.

The loan market has been completely rinsed and I have to be honest and say, it wasn’t very scientific – but we’ll come on to that in a second.

First up, a bit of financial.

Remember how we were working off my forecasts for the season initially? OK – well once the season was over we were able to turn forecasts into actual budgets.

But, I’d forecast €202K gate receipts and I must have screwed the numbers up completely – as we’re able to budget for €400K this season (including season tickets which maybe I missed). So that has covered the TV money drop and at this exact moment I feel like I have €100K more to play with.

Merch and matchday revenues came in pretty much the same as the forecast and we’ve increased the sponsorships by €150K or so.

This became clear after about 75% of the squad building was complete – but has meant that rather than only thinking of a squad of 15 senior permanent signed and paid players I’ve been able to increase that to a squad of 18 (if I choose to) and the average wage available for each of them is €707, higher than what the RWB(f) was with a squad of 15. In effect, we have €180K more in the annual budget than I initially thought which is still GR+MR+merch+€100K.

But, I haven’t gone for the full 18 players and I still found it hard to actually spend the money – there was one player I really wanted but I wasn’t completely prepared to give hi everything he asked for on principle, especially as we ended up haggling over €25 a week. Was I wrong to lose a player over that? Probably. It’s just the way I have always been. There’s always another player.

So, the squad looked like this in the last update;

But since then, a few changes have happened and all the loan signings have been made.

Now it is this;

Eagle eyes will note I renewed Mallamo and Spats and that Castellano is a new signing. He was a free agent who impressed on trial, got good reports from the coaches and was affordable. He’s a good age too – a product of the Atalanta Academy with a few seasons at this level under his belt. He’ll be a starter, probably alongside Marino – though last season’s top scorer is going into this season with an injury and a very disrupted preseason.

No changes in the Academy players.

But in the loan department…

You’ll notice a theme here – so let me explain my non-scientific strategy here.

They are all from top Serie A clubs with great Academies so, to a point, I think I have minimised risk and can gamble on each of them. Will all eight be amazing, start every week and lead me to glory? No. But if 50% of them can be solid starters and perform well, I’m happy.

They are all 18. I opted against anyone 17 as I felt that they’d be too close in age to the Academy players and might be too green to go into a Serie C season. These kids all got some football last season – a few on loan in Serie C and at least two of them were around their first-team squad. I also noticed that most players 19 and above came with the club wanting us to pay some of the wages – so I pounced quickly when I found a player from a top club who was 18 in the positions I wanted and there was no wage expectation. Blind shopping maybe, but I reckon it will work.

So yeah – the books will balance with this. We should break even this season which is frankly unheard of at this level. But balancing the books is only part of it. We have to compete on the pitch.

Can we – given that our average age in the first-team squad is 20? The bookies are backing us to finish bottom – thanks, chaps.

Preseason was decent enough – some wins, some losses, some good performances against Serie B teams.

And then we drew Rimini in the Coppa Italia prelim round – another Serie B team.

I know, this doesn’t guarantee a safe Serie C finish or higher but it was a breathtaking start.

So this season is all about that – spending very little and seeing where we go. Serie C survival is the minimum but deep down, I’d love to beat the 4th place we got last season and retain the Coppa Lega Pro.