One of my personal tasks for FM23 is to make a team a real threat from set pieces, and over at liverpoolfcanalysis.com, I started this process – you can see the original article here.

In the real world, Liverpool have been a threat from attacking set-pieces for some time, with a variety of physical figures joining in on the fun. They have also been a solid team when defending set-pieces, with organisation being a major key to this success. While making your mark in the world or set-pieces can be difficult in Football Manager, many FM players tend to simply leave the set-pieces on the default setting. We feel that this is an area to be exploited, with a range of options at your disposal. With that in mind, in this article, we will provide a group of set-piece set-ups that, in theory, should bring success. Part two next week will provide a reflection article where we assess how effective these set-piece tactics have been in a set of friendly fixtures. We will be focusing on corners, both defensive and attacking, along with attacking free kicks from deep and wide positions.

Liverpool have a few players who excel in taking free kicks and corners and these will be key to any set-piece success there is to be had. As with your squad in general, it is important to have depth in set-piece takers, as we can see from our lists below. 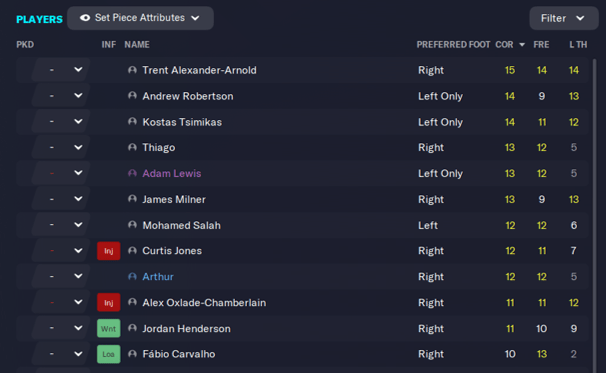 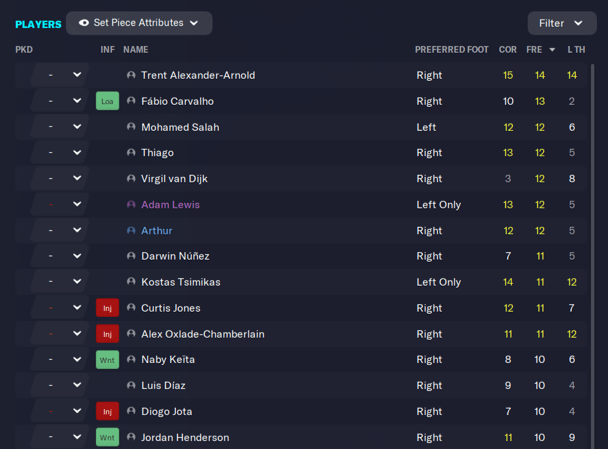 The first image of the two above ranks the squad in order of corner-taking ability, while the second represents the ability of free-kick takers in the squad. With no surprise, Trent Alexander-Arnold is top of both lists, with some players also cropping up towards the top on both as well. In the event of some of the top choices being absent, there are a number of players with free-kick/corner starts between 11-13 who can still offer something of impact from set-pieces. It is also worth noting that any new signings we make in a Liverpool save, midfielders especially, will be judged on their set-piece ability. 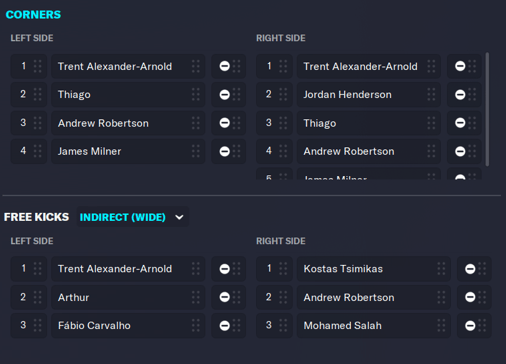 For corners, Trent will be tasked with delivery from both sides – whether the corner delivery is an inswinger or outswinger does not matter for our tactics. Thiago serves as an understudy on both sides along with James Milner and Andrew Robertson. TAA will also be the primary free-kick taker, with a selection of players offering good stats to take that responsibility if Trent is not on the pitch.

As you will see from the screenshots below, we won’t be changing too much when it comes to organisation or instructions when defending corners. Usually in FM, as long as you have capable defenders and midfielders, you will do just fine with defending set-pieces without any intervention. Nevertheless, here is how we will set-up with Liverpool in FM23. 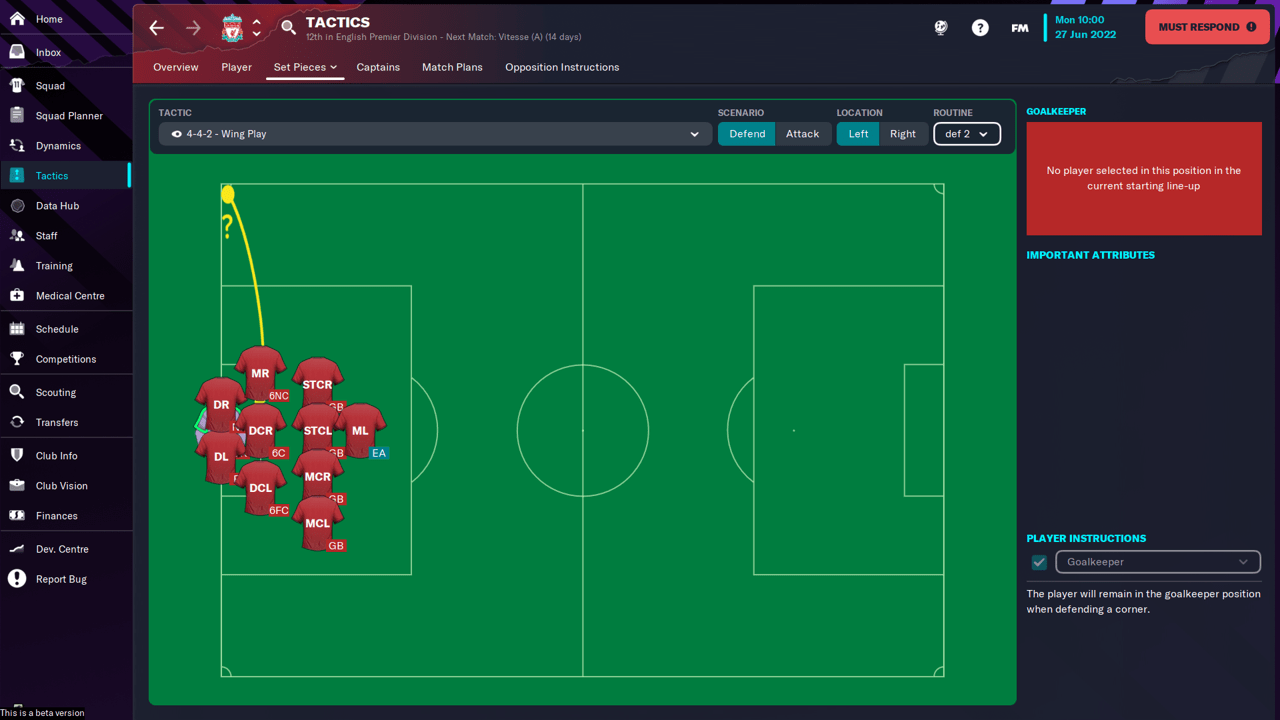 The set-up will be the same from the left and right-side corners. We have both posts covered by full-backs to give the goalkeeper maximum protection on the goal, while both central defenders have an important role in defending the 6-yard box. Midfielders, both attacking and defensive play a role in defending the corner, along with the strikers – the chance of scoring from a direct counterattack from an opposition corner is very low, so leaving a striker high up is somewhat futile. However, depending on the opponent, this may be a wise option as a one-off.

As a team with several players who excel aerially, whether it’s because of their height or if its just down to their athletic ability, we will be aiming to inflict a high level of damage from corners. In FM22, I had moderate success with an average team when aiming corners towards the near post, so I have decided to adopt this approach with the Reds. 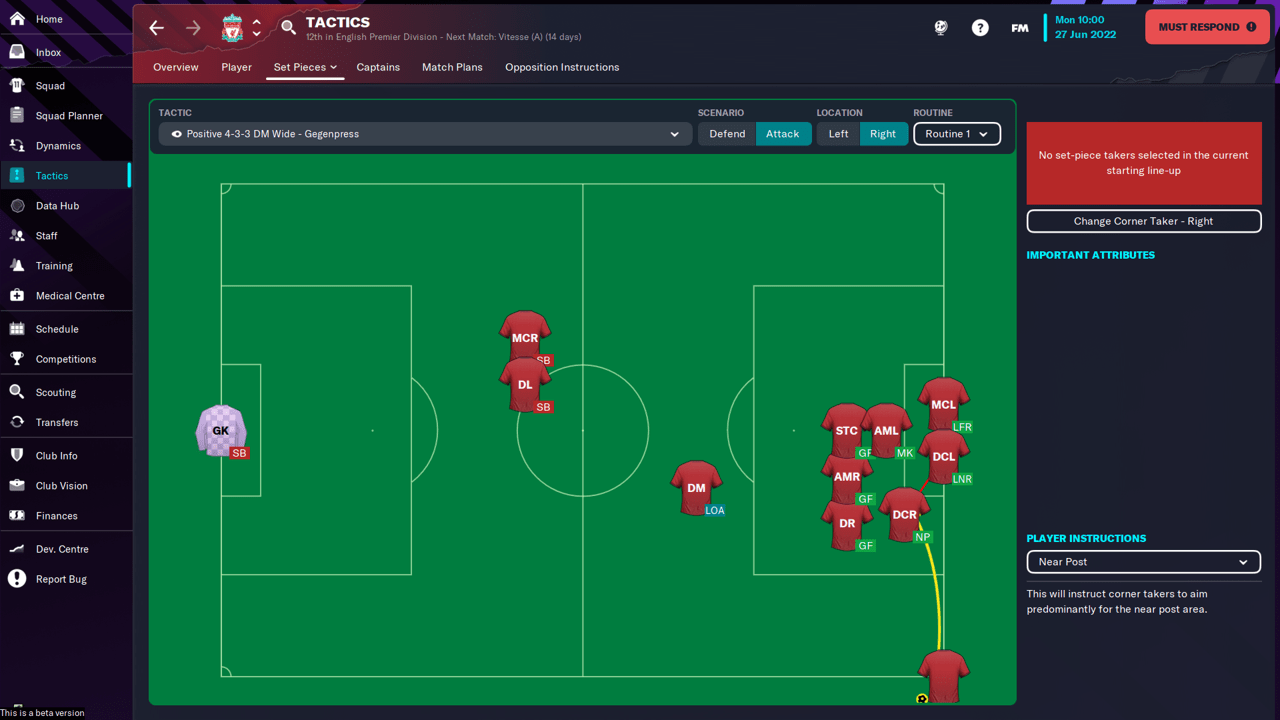 Both sides will be set-up fairly similar to each other, with no change in the set-up inside the box. We will look to attack the near post from both sides, with a heavy presence aimed at flooding the box. Both CBs will be tasked with attacking the near post, with one of them set to lurk in that location, while the other will charge into the zone upon delivery. We will have one player lurking at the back post to collect any flick-ons/ricochets towards that area, with the rest of the presence aimed at occupying the space between the penalty spot and six-yard box, maximising our threat at that near post area. The players who should have less attacking threat have been positioned in locations that also allow them to attack 2nd balls or ricochets, with the aerial responsibility falling to the CBs primarily. Fabinho, or the defensive midfielder playing will lurk at the edge of the box in anticipation of the ball being cleared, allowing him to collect the ball to maintain attacking pressure.

We will also look to send players forward to attack from free-kicks, but with less risk than corners. Only certain players will be sent forward, while our defensive presence protects against possible counterattacks from the opposition. 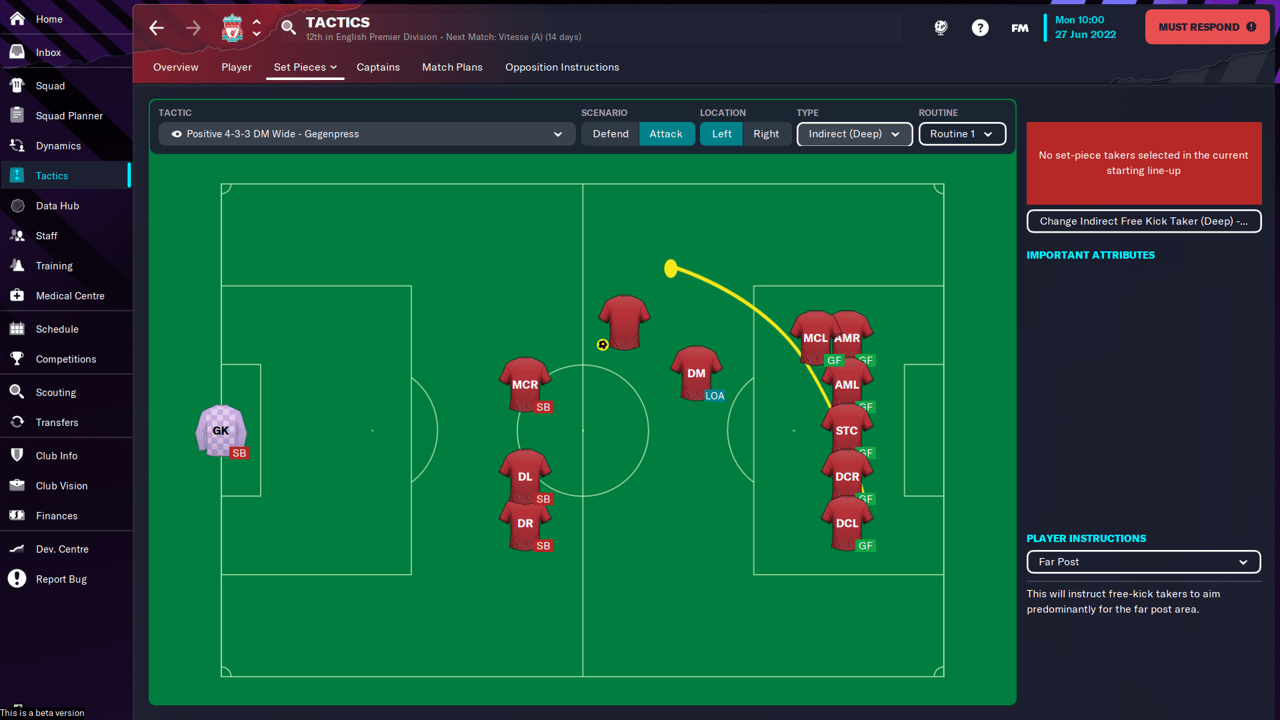 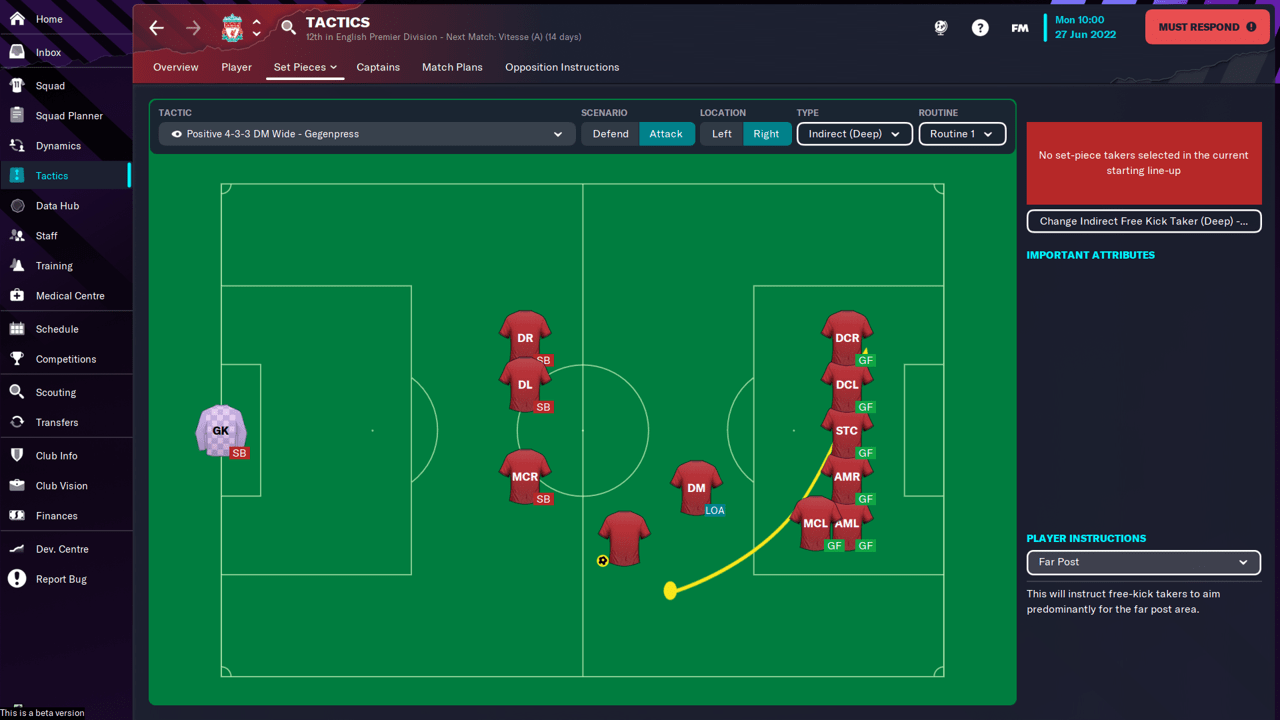 We will look at deep free kicks first, with the set-up for left and right again mirroring each other. The free-kick taker, which is likely to be TAA unless he is absent, has been instructed to aim his deliveries towards the far post. Meeting those deliveries at the far post will be the central defenders first, along with the striker as these three will offer the greatest aerial threat. Should the delivery meet them, they will have a good chance to strike on goal – alternatively, they may be better of cushioning the ball back across the goal, where various midfielders will be located. The defensive midfielder will be lurking at the edge of the box awaiting any second balls, but this positioning will also allow him to be the first line of defence against counterattacks. 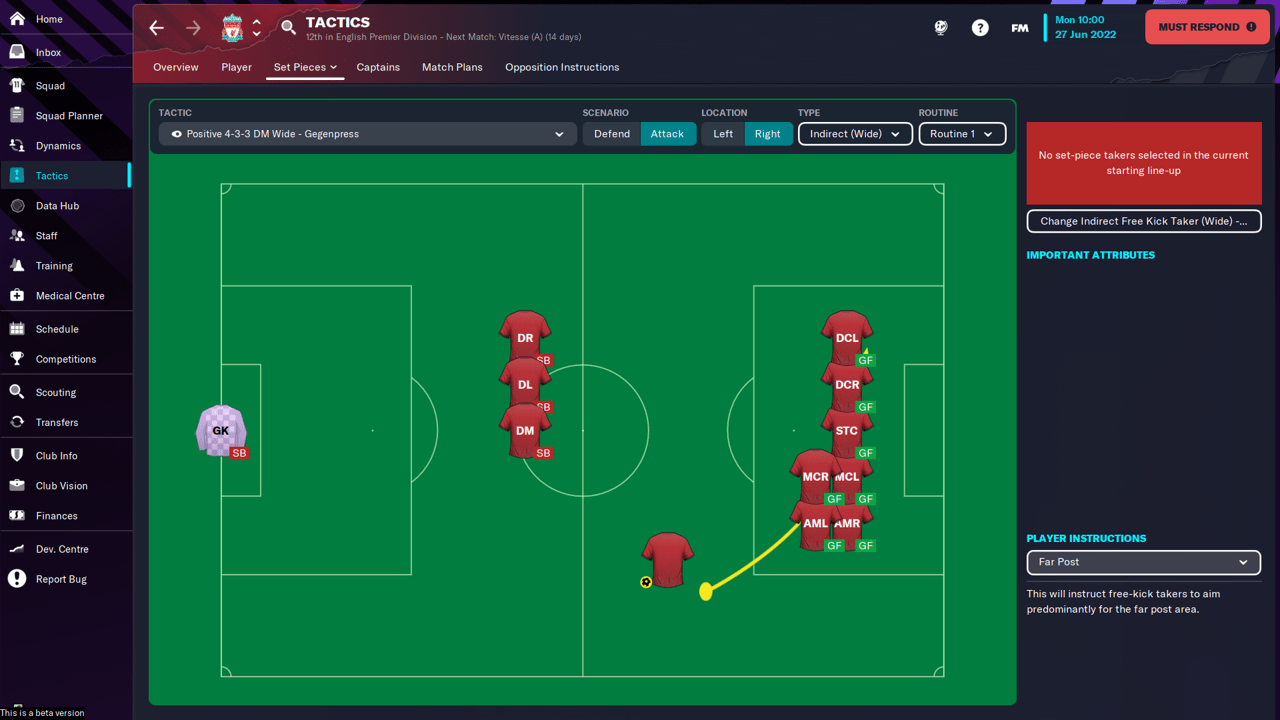 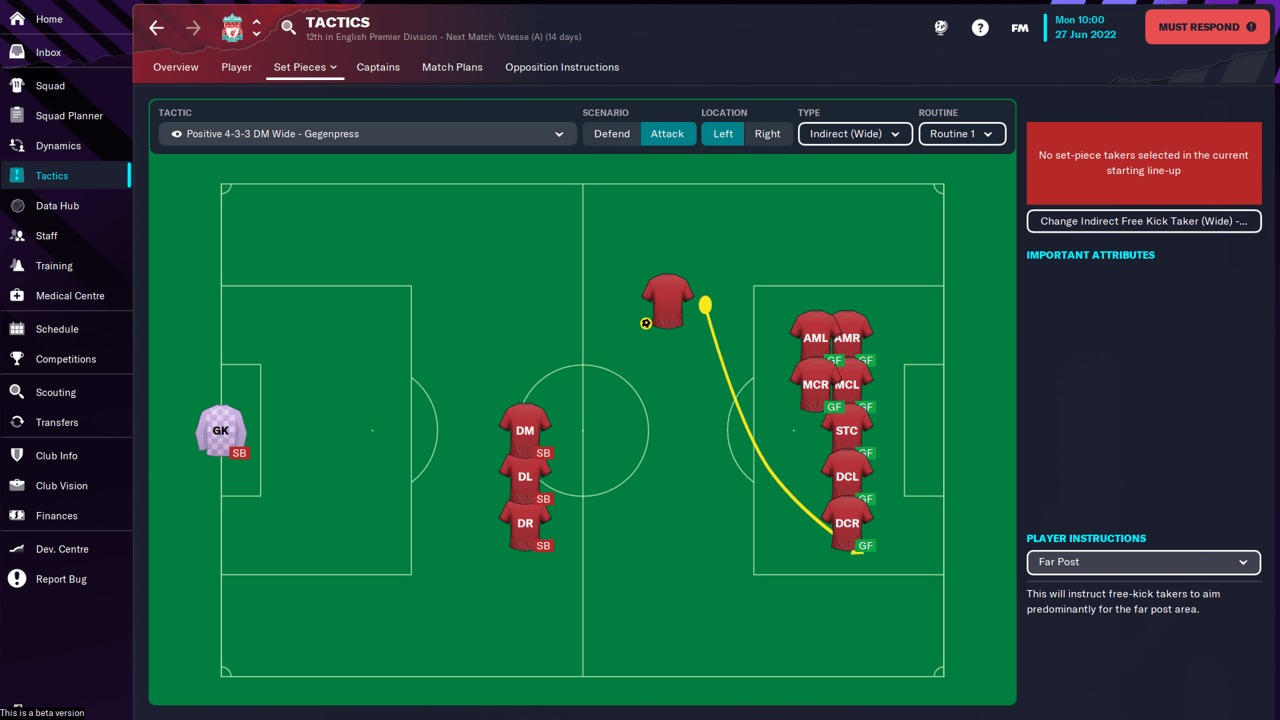 Moving on to wide free kicks, the attacking set-up is fairly similar in the way that the delivery instruction is to aim for the far post, with the CBs and striker located in that area, with midfielders located at the side of the near post. We have opted to leave the DM back defending rather than lurking at the edge of the box this time, more as an experimental move than anything else – it will allow us to see from which position he is more effective. But it is also a tactical decision – since the free kick will always be from a wide area, having an extra man back in defence could offer a strong defence and a better reaction to an opposition counterattack.

While we should look to dominate the game in open play with Liverpool, it is always a good idea to try and maximise your attacking threat and defensive organisation in every area possible, which is why we are looking into set-piece tactics. We have looked at defending corners to give us the best chance at being formidable at the back, as well as looking at positional set-ups from free-kicks in positions where a shot is off the cards. Personally, the most important aspect we have covered in this article is attacking corners, as we will likely have a high volume of these come our way. With a set instruction to send the ball and aerial threats toward the front post, we are looking to cause danger for our opponents by having all of the big aerial threats attacking the same area, which is aided by TAA who will give us a high chance of consistent quality deliveries.