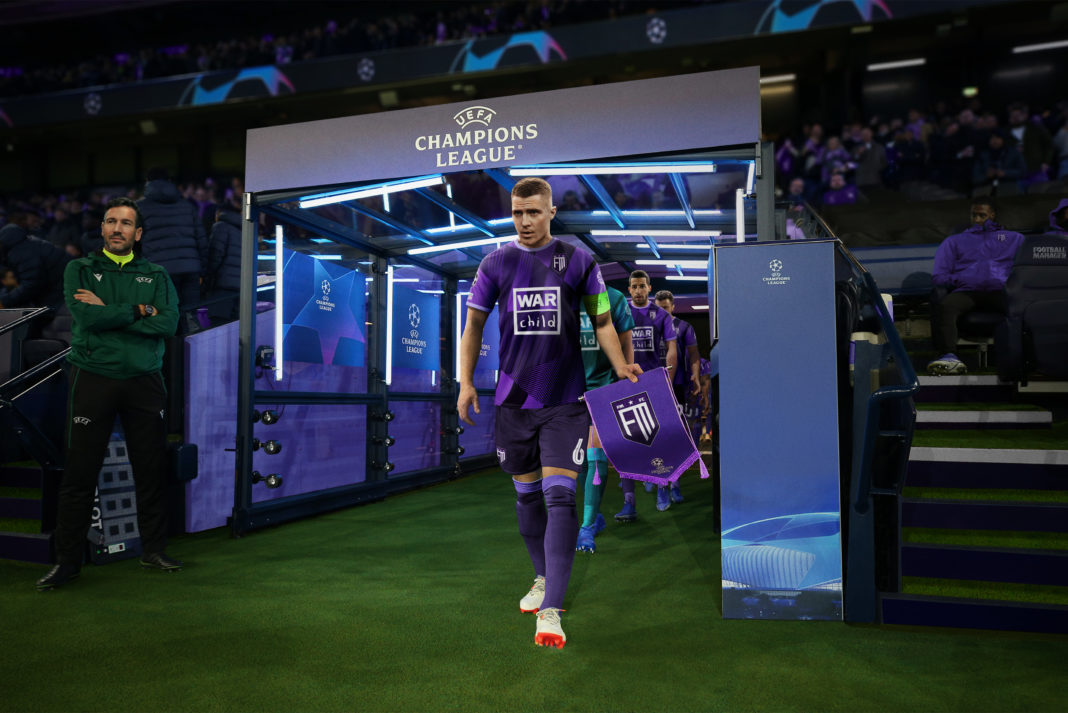 Recently, I undertook the task of achieving set-piece stardom on FM, and you can read the original piece published here.

We did it! We set out to make set-pieces a crucial part of our tactical set-up as Liverpool manager and it was a huge success! As you’ll recall, last week we went through just how we intend to set up from corners and deep/wide free kicks – if you missed it, check it out here. We carried those setups throughout the season – a season which we simulated through, almost using it as a weapons testing facility. As you will find out, this brought huge success in some areas, and less so in others. As you may recall from part one, my vision from corners was to fire crosses in at the near post, cramming that area with players who can dominate aerially. The idea for attacking free kicks was similar, but instead, the attack was aimed toward the far post.

This article will look at the statistical data from our set-pieces as Liverpool in Football Manager 2023, compared to other teams in the respective competitions – oddly enough, I could not find anything in the data hub that tracks set-piece efficiency!

Although the season was entirely simulated, I did check in once in a while to make sure how things were going in general and to see how efficient we were from set pieces (definitely wasn’t just checking that I hadn’t been sacked…). At a point in the season that roughly coincided with the midway point of the Premier League season, the numbers were woeful – we had scored just once from a corner in the league by that point. I did not even check how the corners were doing in other competitions because I was already convinced that a small tweak was needed. That small tweak looked to have made a huge difference.

The setup stayed the same in theory, I just adjusted a couple of player positions to suit the team I had – I took a CB away from “lurking at the near post” and swapped a winger into that role instead. That CB was simply instructed to “get in the box” – locating him on the point nearest the front post for that instruction. From that point, we seemed to be much more dangerous from corners in all competitions, as you will see.

As this was a test save where we simulated the season, any success we had in terms of silverware was not so important to me… or so I thought until we had a highly successful season under the circumstances of not actually managing the team!

With no new signings made, we were already up against it, but my boys did me proud. We finished 2nd in the Premier League, just four points behind Manchester City – I think you can cut me some slack on that considering they have a literal goal machine up front! We were dismal in the Carabao Cup but did well in the FA Cup, reaching the semi-finals only to be beaten by Arsenal. Now, I’ve saved the best until last, as we went on to win the UEFA Champions League! And what’s even better, it was a 1-0, in Istanbul of all places, with the winning coming from? You guessed it, a corner! 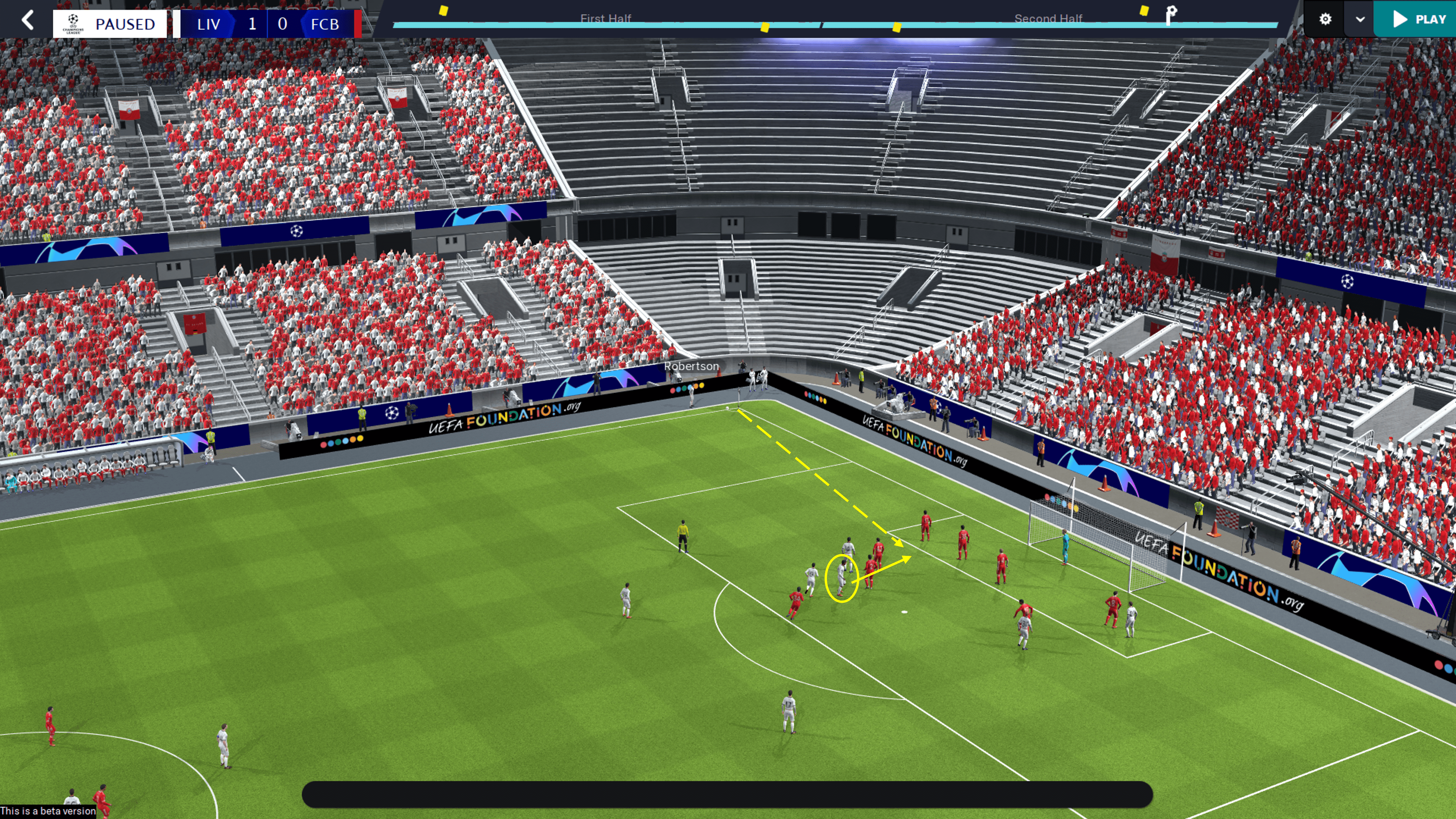 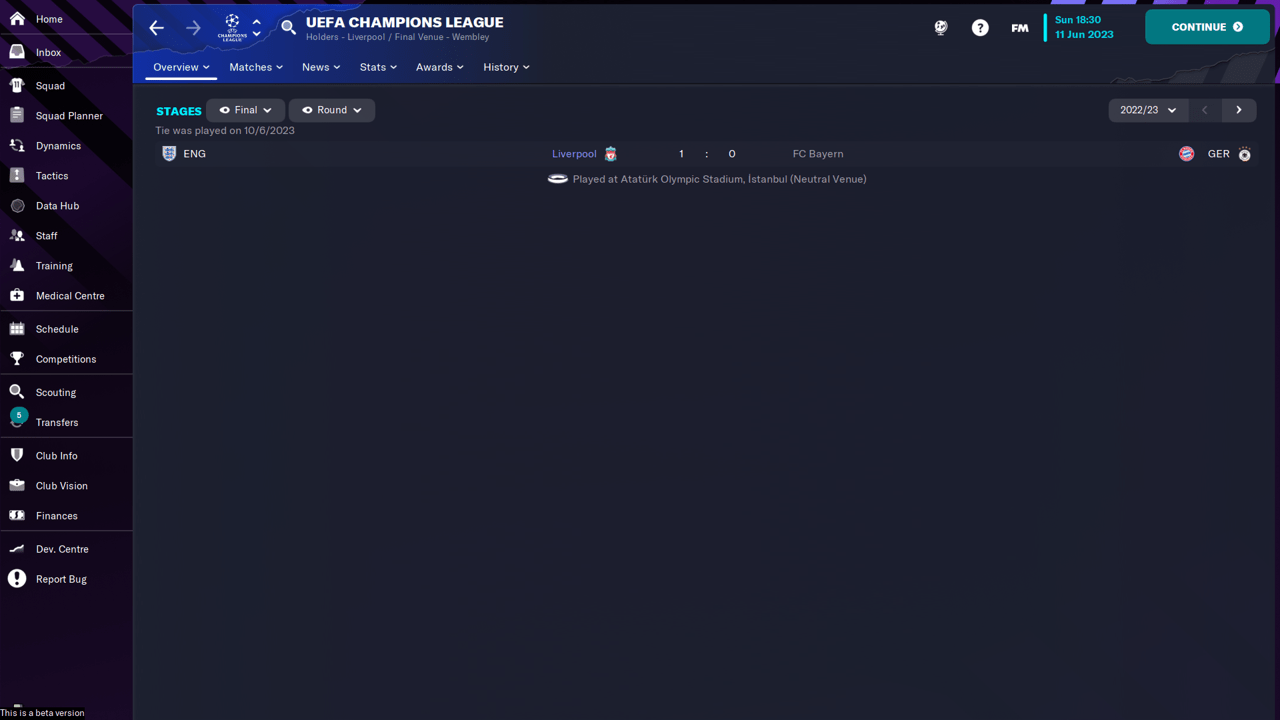 It was Andrew Robertson’s outswinging delivery that was met by the towering Ibrahima Konaté to give us the winning goal. I have included the above screenshots to maintain credibility as we were not able to view the overall team competition stats for the UCL after the final (whether that’s a bug or not, we don’t know!) – as you will see, though, we have included screenshots from before the final.

This was my primary focus/concern for this set-pieces project – I wanted us to become a feared team from corners. In some ways, we achieved that, but as you will see below, we still have some work to do when the time comes for a full save. We scored a ghastly zero goals from corners in the Carabao Cup, so we haven’t included that – we only played once! 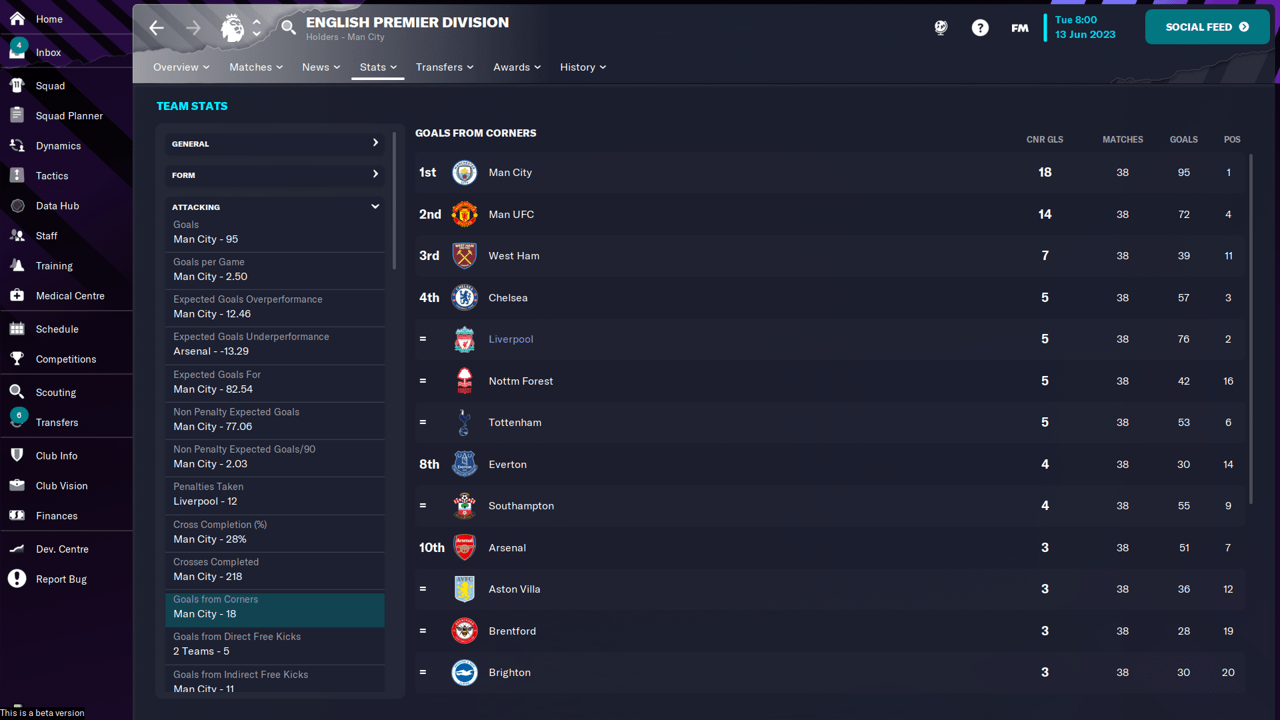 While finishing joint fourth in the division for most goals from a corner, I had hoped that we’d bag a few more than five corner goals – especially when Manchester City and Manchester United scored for fun from them. So how we view this depends on your philosophical bend – and I choose to sit on the fence. I’m pleased that we ranked high in comparison to the rest of the league, but I will be looking for more corner goals in the future. Furthermore, as you will see below, we didn’t exactly struggle from corners across the board… 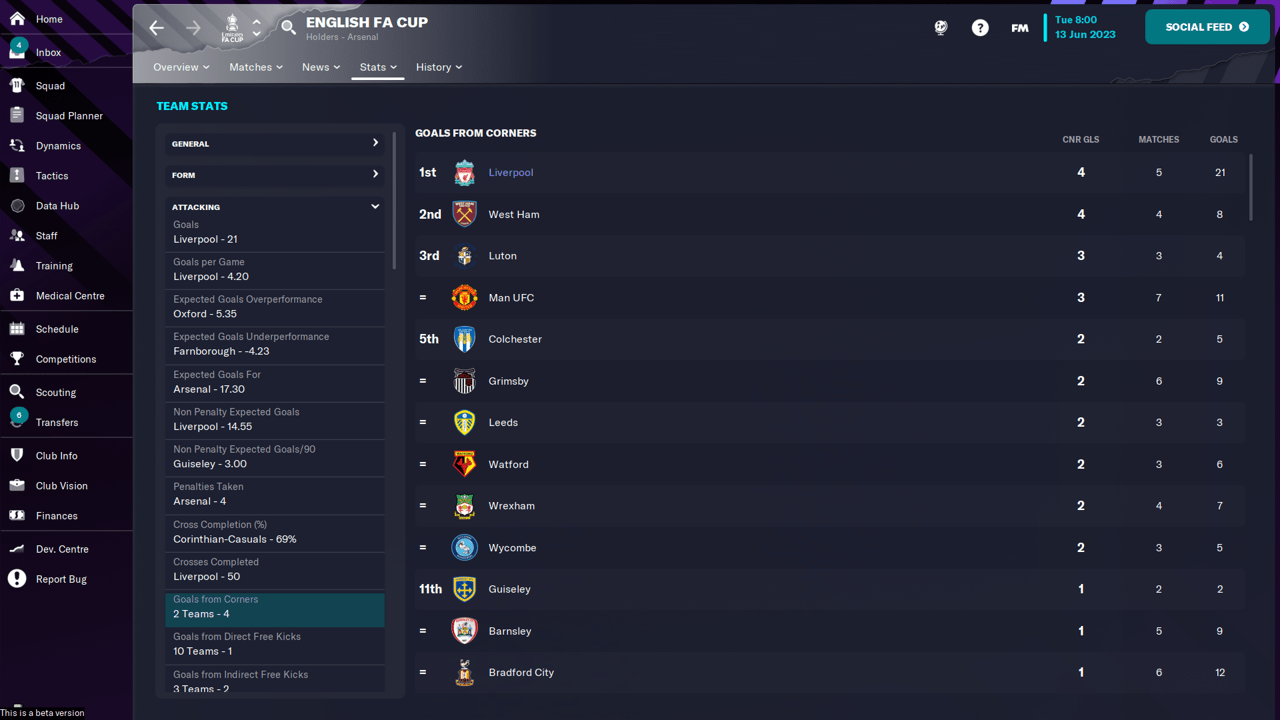 Having played five matches in the FA cup and scoring 21 goals, we scored four times from a corner which is very impressive and highlights that we do indeed pose a threat from those particular set pieces. We were matched only by West Ham United, who also did very well in from corners in the League. 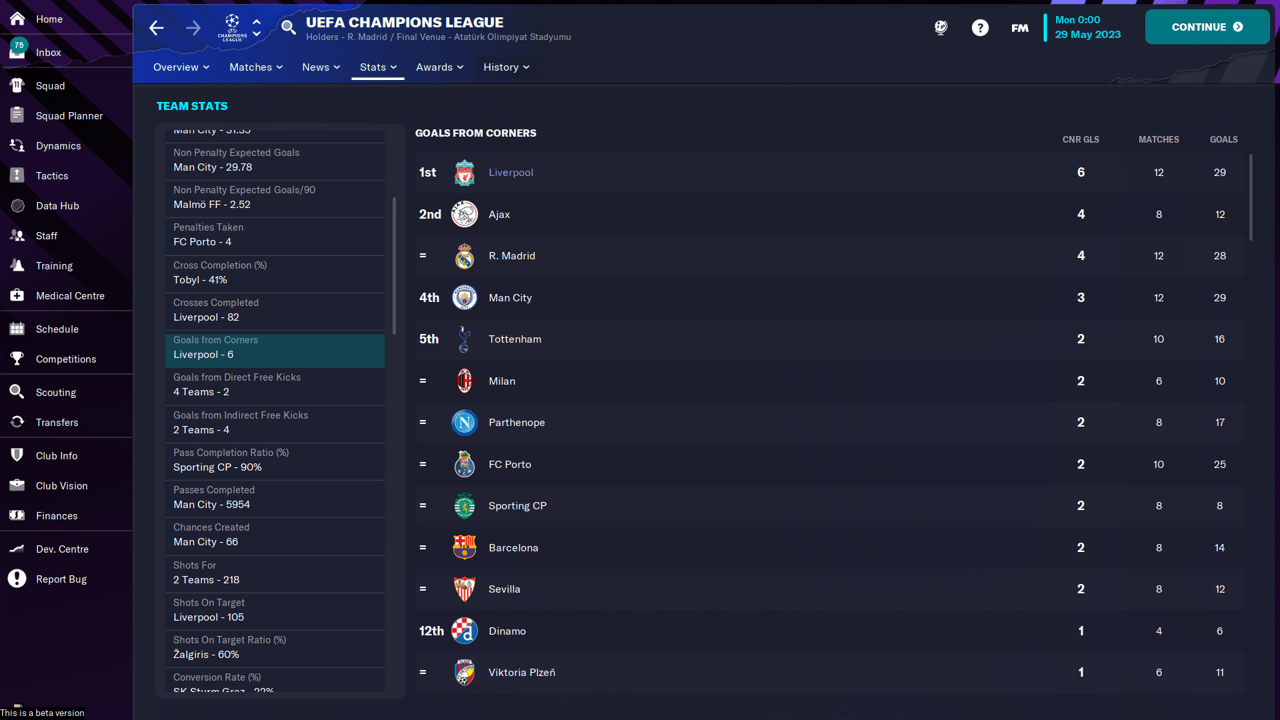 We also topped the charts on the grandest stage of them all! We actually scored seven goals from corners (don’t forget this screenshot was taken before the UCL final), out of 30 total goals – a frightening amount of goals if you ask me. If we were able to replicate that form in the league, we may have just beaten City to the title.

This was a close second to my primary focus of attacking corners – only as I believe tactics for corners require more focus and input than indirect free kicks. The aim with these, as mentioned, was to whip the ball toward the far post, where my biggest aerial threats were located. They’d be able to either get a shot away on goal or cushion the ball across the box for one of the attacking midfielders, and as you can see below, we did quite well at this! 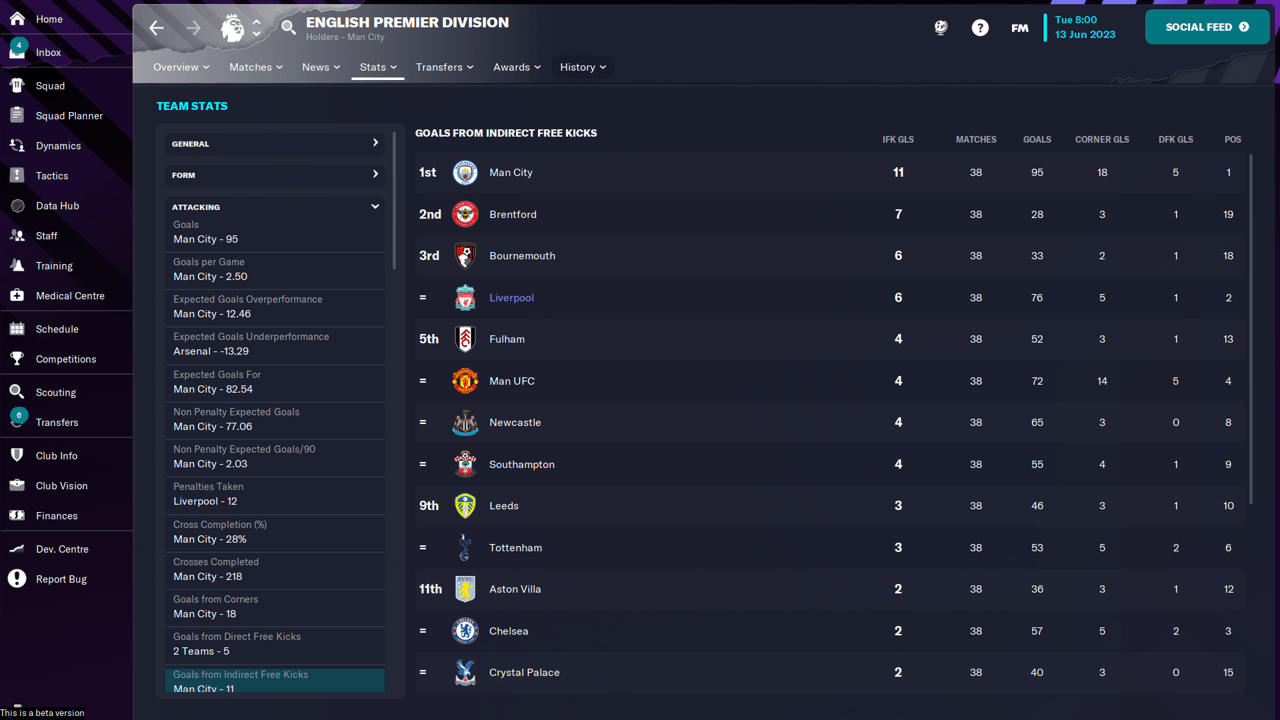 Quelle surprise, Manchester City are at the top again – looks like their set pieces actually won them the title! Surprisingly, Brentford and Bournemouth were in second and third respectively – they were both relegated yet did fairly well from indirect free kicks. We came in with six goals from indirect free kicks, which is fairly good – of course, it helps to have someone like Trent Alexander-Arnold on your side to whip these crosses in!

We only managed one indirect free-kick goal in the FA Cup, but truthfully this doesn’t produce any concern since it was only from five games, and we performed well in other competitions. For context, Arsenal only scored once from indirect free kicks and they won the competition. 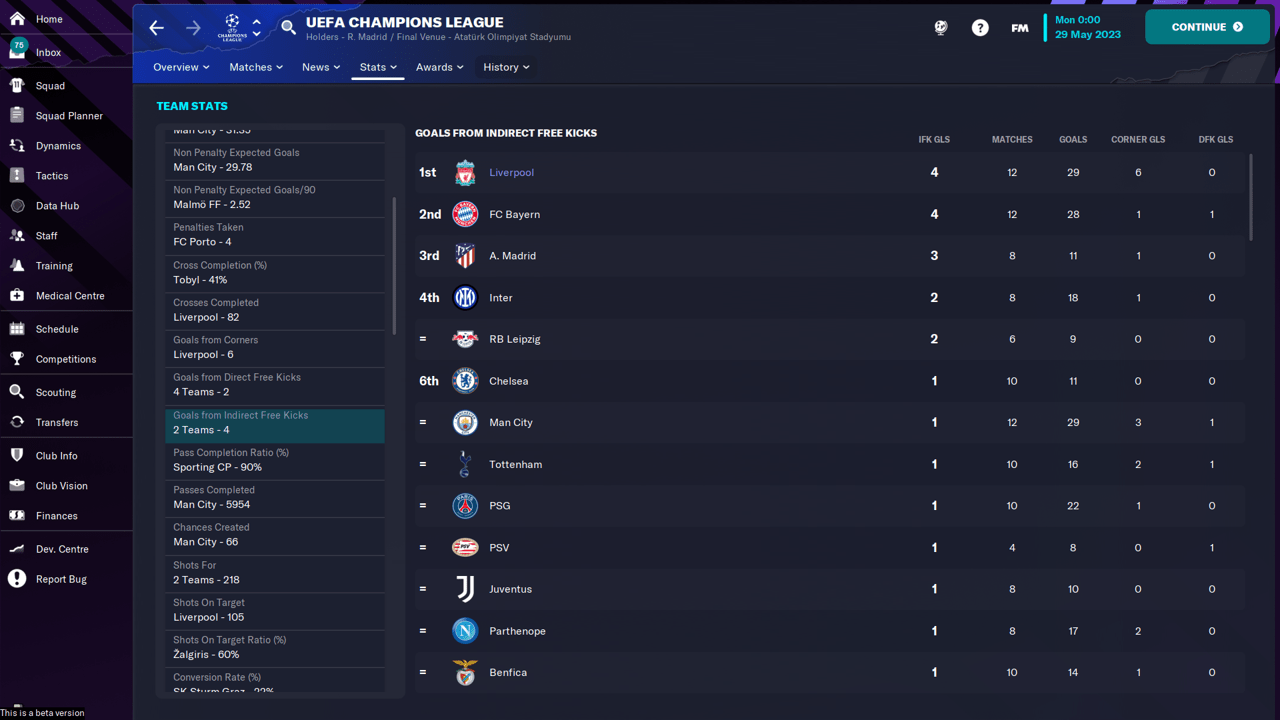 30 goals scored in the UCL from my reds – seven of those were from corners, so 4/23 indirect free kick goals is a very pleasing stat to see. It shows a high level of threat and is proof that the setup and positioning of your players in the box can make a huge difference.

In part one, I mentioned that defending set pieces was not a major concern for me, as we should be able to keep goals out in those situations regardless. But I did alter a couple of minor aspects to give us what I believed to be the best setup – below are the results. Similar to attacking corners, we conceded no goals from either indirect free kicks or corners in the Carabao Cup – but again, we only played once! However, we did also get all the way to the FA Cup semi-finals without conceding a goal from either corners or free kicks! 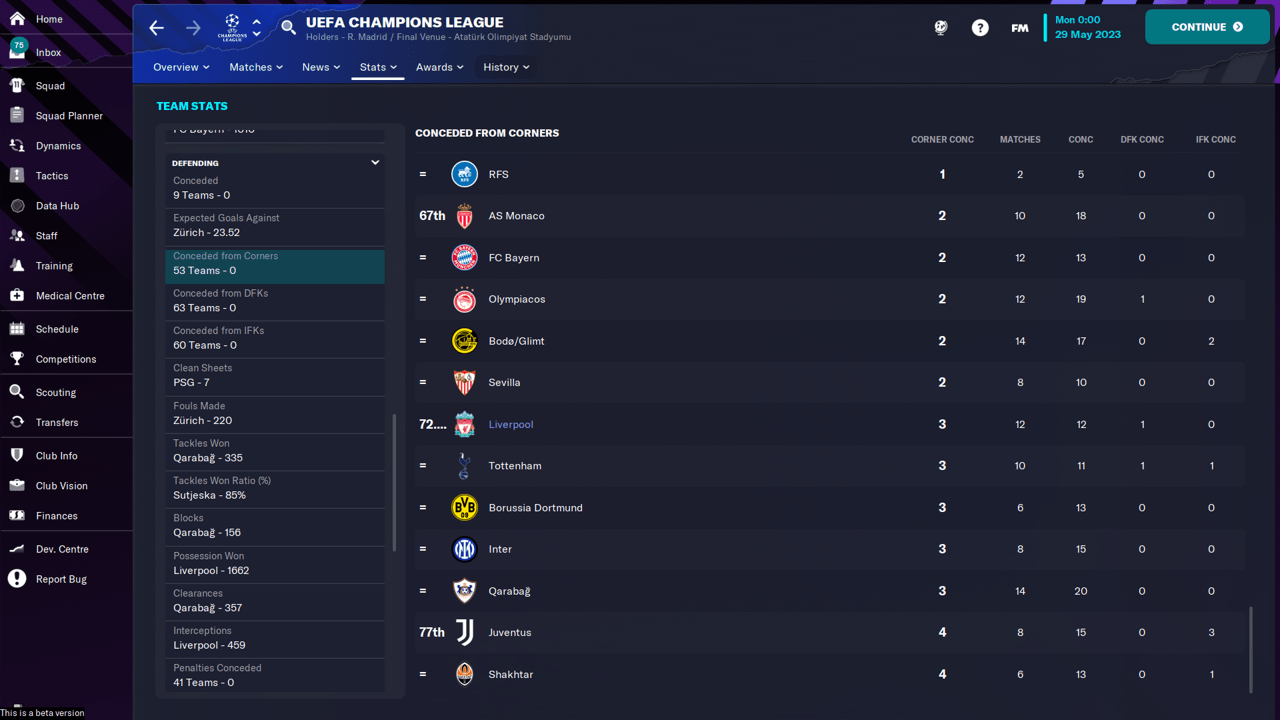 While conceding from three corners in twelve games is not horrendous, it certainly isn’t good. Based on our performance in this area in other competitions, we must have just faced some teams who are particularly dangerous from corners in Europe. We conceded one goal from a direct free kick in this competition – arguably unavoidable and conceded zero from indirect free kicks. 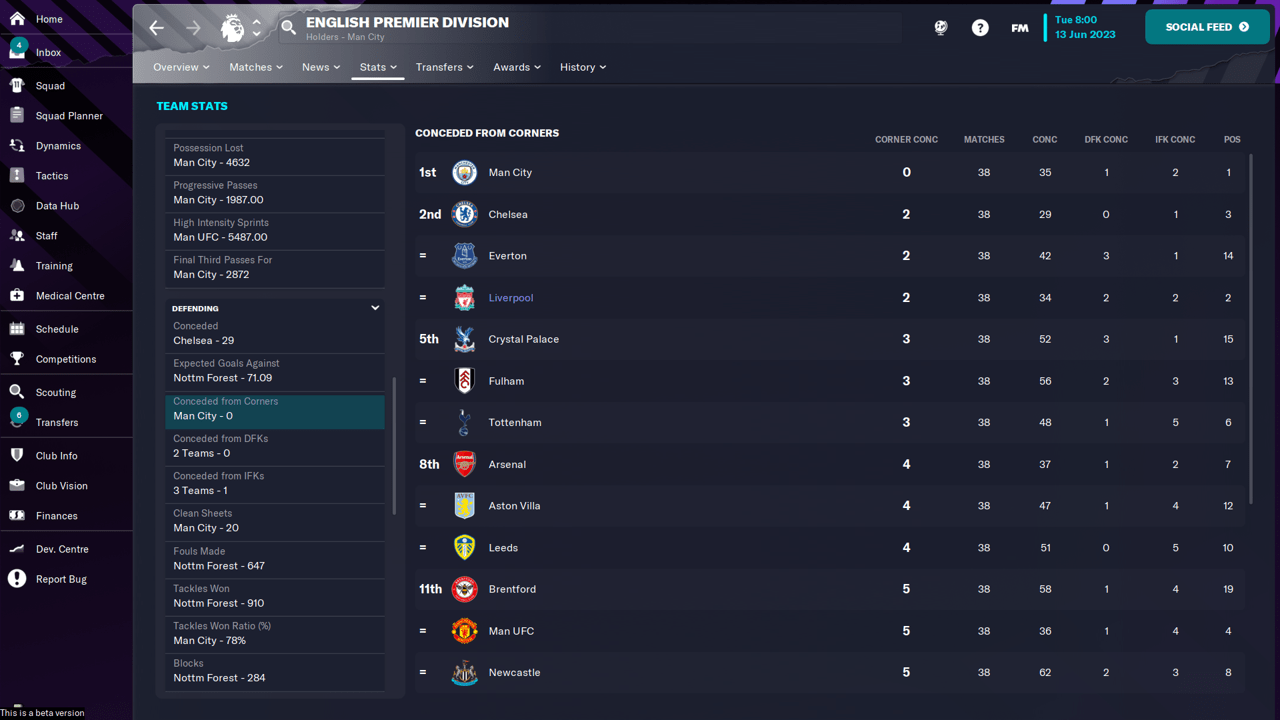 Here is the aforementioned proof of us being able to defend corners – two goals all season is very good in my books. The eventual goal would be to reach the heights of City (again) who didn’t concede from a corner at all during the league season. 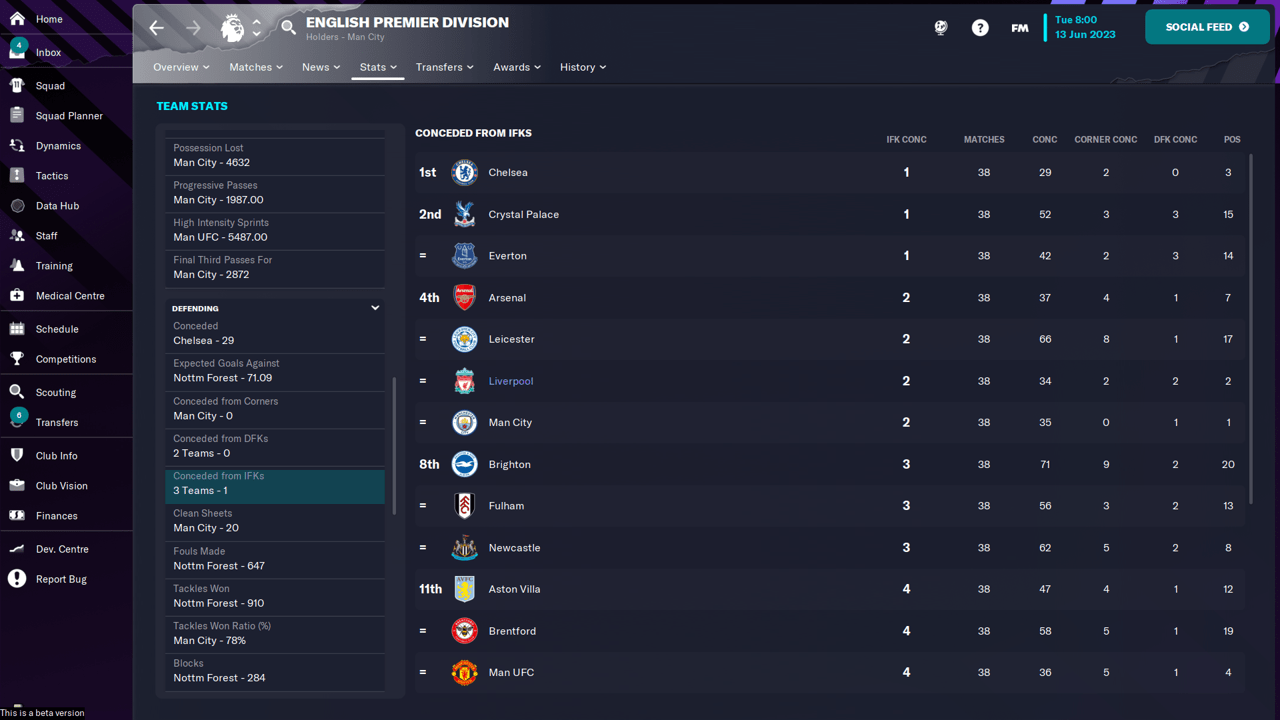 We also rank highly on defending against indirect free kicks, conceding twice all season from these scenarios. It ties us with the monstrous Manchester City, so there’s finally something they didn’t beat us at! When you consider we only conceded six goals in total from corners and free kicks (both direct and indirect), there is no doubt that we are a well-organised team from set-pieces who are difficult to beat. Having said that, I would be annoyed if we didn’t better this in the second season.

I hope this little set-piece project has been of value to some – it definitely has been for me. I mentioned last week that while scoring from set pieces won’t be the primary focus of my Liverpool team in attack, there is the possibility to add another dangerous dimension to your team in applying more focus and input into them. The numbers in each competition speak for themselves… apart from the Carabao Cup, we don’t talk about the Carabao cup. In all seriousness though, I was pleased to see that my set-piece tactics paid off in some important ways – and even brought us the Champions League in the first season! I will definitely be applying the same tactics to my Liverpool team when I begin the full save in the near future. I hope I saved them!