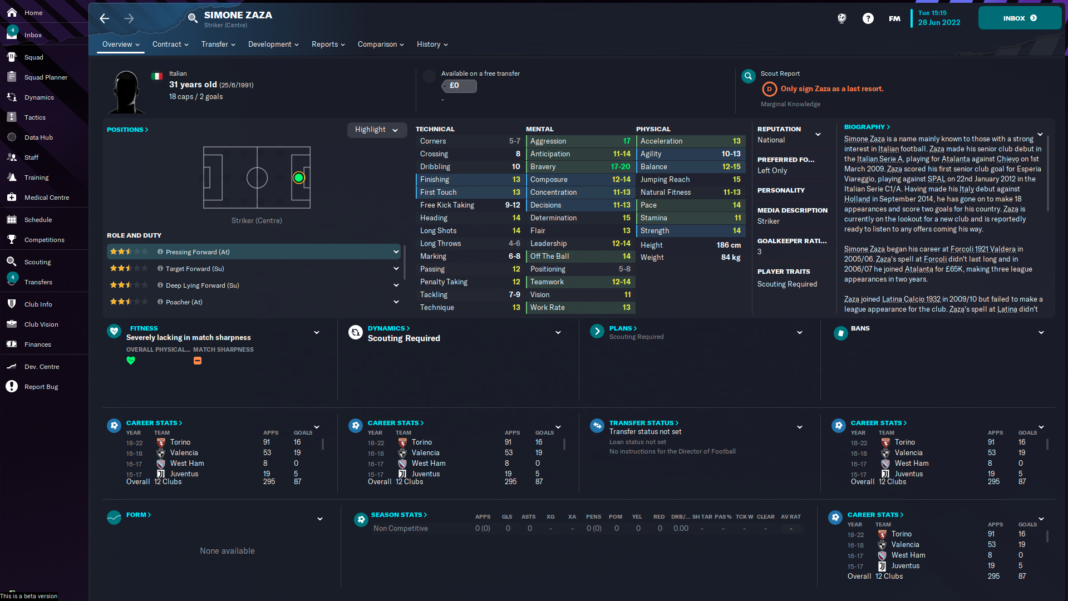 The cost of fuel has begun to rise again, energy bills are through the roof, Freddo’s have seen a 200% increase in price since the 1990s, and even the Tesco meal deal has now shot up to £3.40. There are budget cuts all over the place, and inflation is higher than ever, it’s time to start thinking about saving the pennies.

Whilst FM23 won’t have been affected by the state of the economy right now, it’s always nice to save a bit of money where possible, especially if you are managing at the lower end of the table. Free agents are often frowned upon by FM players, typically because of their advancing age or previous injury record. However, whilst you can’t be expecting the perfect player to be available for free, there are still several players that can provide short-term fixes to squad issues you may encounter. Why spend £6 million on a backup player when you can sign a free agent to fulfil the same role?

They are low risk, at minimal costs, and usually accept squad roles that don’t require you to play them every match day. Most of the time, the players are approaching the tail end of their careers and are considered experienced players that can be beneficial to the squad dynamics. No matter who I’m managing, I love a freebie, and will always look to bring a free agent in where possible.

To make life easier at the start of your FM23 beta save, I have compiled a list of some of the best players available on a free transfer at the start of the game. However, for many of them, they start the game with several interesting parties, so you’ll need to act quick if you want to acquire their services. 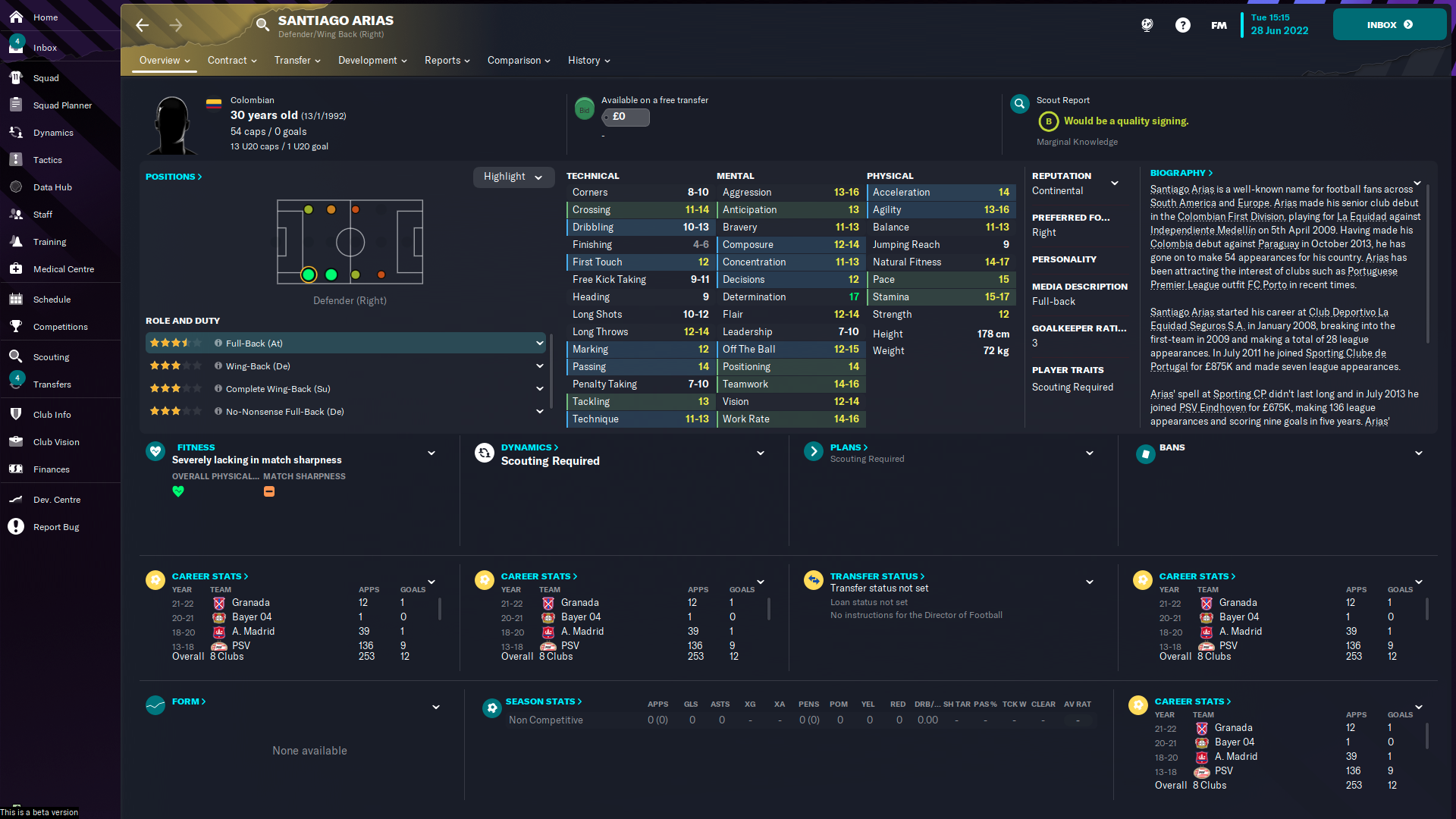 Starting off with the pick of the bunch. Freed from the defensive shackles of Diego Simeone, Colombian right-back Santiago Arias is available to sign on a free. Many European teams are interested in his signature, so this is a signing you’d have to make almost instantly if you were to have any chance of persuading him to join.

Arias’ time at Atletico Madrid was one of disappointment, mainly due to the long-term injuries he sustained throughout his four years in the Spanish capital. He went out on loan to Bayer Leverkusen, and more recently Granada, but failed to shake off the injuries which had hampered his career to date.

However, after being released at the end of his contract by Simeone, he is now both injury free and available to sign on FM23. At 30 years old, there are still a few years left in the tank, and Arias has some impressive in-game attributes. It says it all when in the screenshot above I am managing Manchester United, and the scouts think that he would be a quality signing for the club.

With good acceleration (14), pace (15) and stamina (15-17), Arias has all the attributes required of the modern-day full-back. Able to get up and down the pitch with ease, the Colombian also possesses the player trait ‘gets forward whenever possible’, providing your team with a constant attacking outlet down the right-hand side. 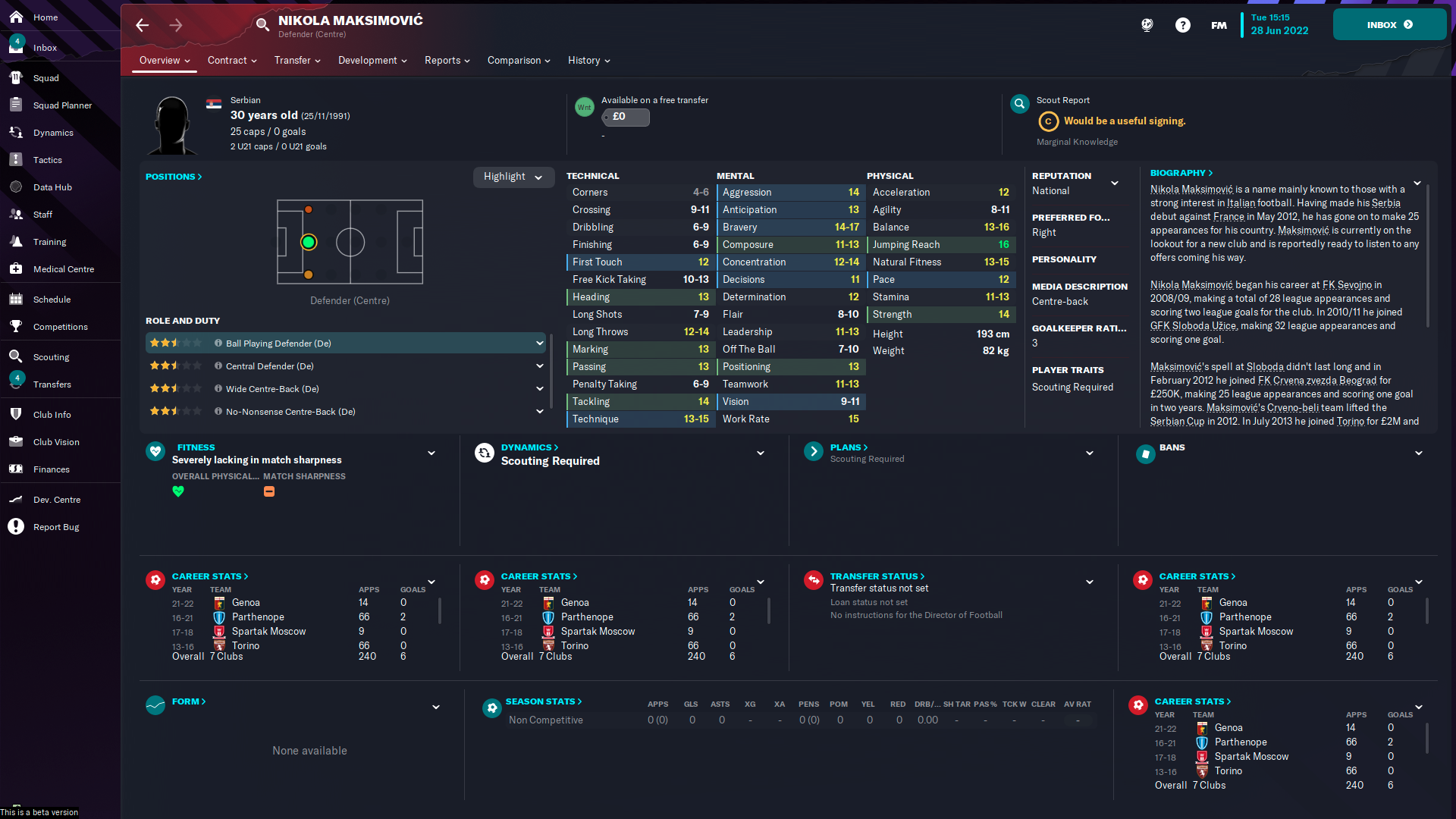 If you’re a fan of the Serie A, then you will know all about Nikola Maksimovic. Formerly of Torino, Napoli, and Genoa, the Serbian centre-back left Genoa at the beginning of the 22/23 season, after just one year at the club. With 25 caps for his nation, and still only 30 years old, Maksimovic represents excellent value in the market.

A very physical centre-back, standing at 193cm tall, with excellent strength (14), jumping reach (16), and aggression (14), Maksimovic still has the attributes to compete at the highest level. Whilst the screenshot above suggests he can play as a ball-playing defender, his attributes are far better suited to playing as your old-fashioned standard central defender.

Bundles of European experience and relatively low wage demands, Maksimovic is about as low risk as they come. Even after a season, if he is no longer required then I am sure he will still be of some value to cash in on and sell. 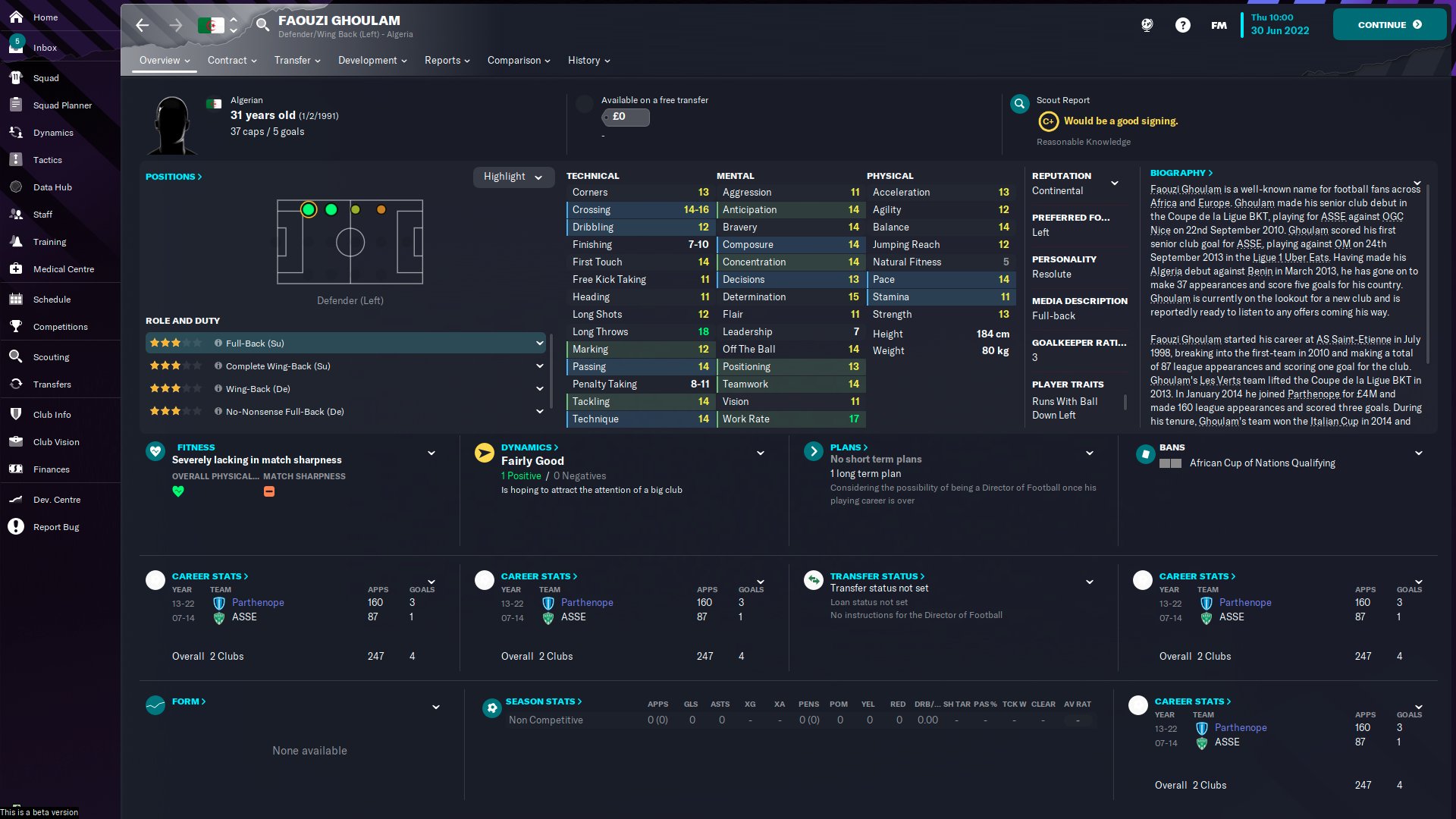 I promise you this isn’t just a list of defenders, in fact, Faouzi Ghoulam is the last defender on this list. After nine years at Napoli, the Algerian left the club in search of a new adventure. The search has seemingly gone pretty miserably, as nobody has snapped him up as of yet.

The vastly experienced full-back, who has 37 caps for Algeria, is still very highly rated by the FM23 scouts and is capable of being a first-team player for clubs competing at the top end of the table. With strong work rate (17) and determination (15), paired with impressive crossing (14-16) and tackling (14) attributes, Ghoulam is a very well-rounded full-back. He could even probably be successfully retrained to play as a left sided centre-back in a back three, should your system need one.

If you fancy channelling your inner Tony Pulis, then Ghoulam also has excellent long throws (18). Load the box up with your tallest players and let the Algerian hurl balls into the box like a human slingshot. The only stumbling block with the former Napoli man, other than his single-digit attribute for natural fitness (5), is his wage demands. Whilst you won’t pay a transfer fee, he won’t come cheap, so it’s a case of weighing up how desperately you need a left back. 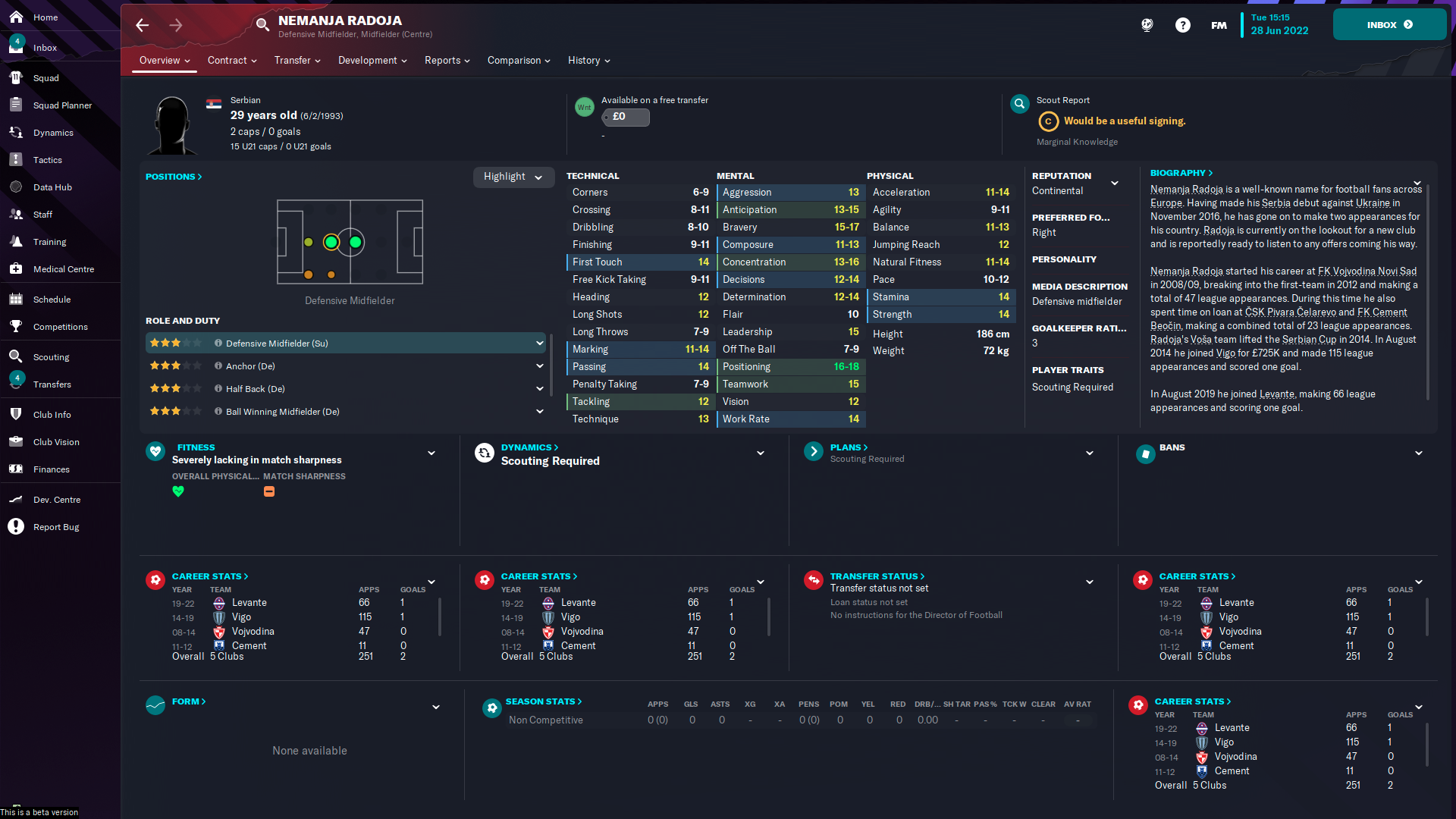 The Serbians clearly just don’t fancy playing football this season, do they? Two-time Serbian international, Nemanja Radoja, also finds himself without a club. With over 100 appearances for Celta Vigo and 66 caps for Levante, Radoja has built up a reputation in Spain for being a tough tackling midfielder.

Every team needs a player in midfield to do the dirty work, and with good work rate (14), positioning (16-18), and anticipation (13-15) attributes, Radoja will do just that. He may not possess the best technical attributes, but his mental and physical attributes more than make up for it.

If you are looking for somebody to break up play in the middle of your midfield, then look no further than Radoja. At 29 years old, he is one of the youngest players on this list and can continue playing at the top level for a few more years minimum. With cheap wages, the Serbian is one of them that even if you don’t intend on playing him all too often, he is still a good addition to the squad. 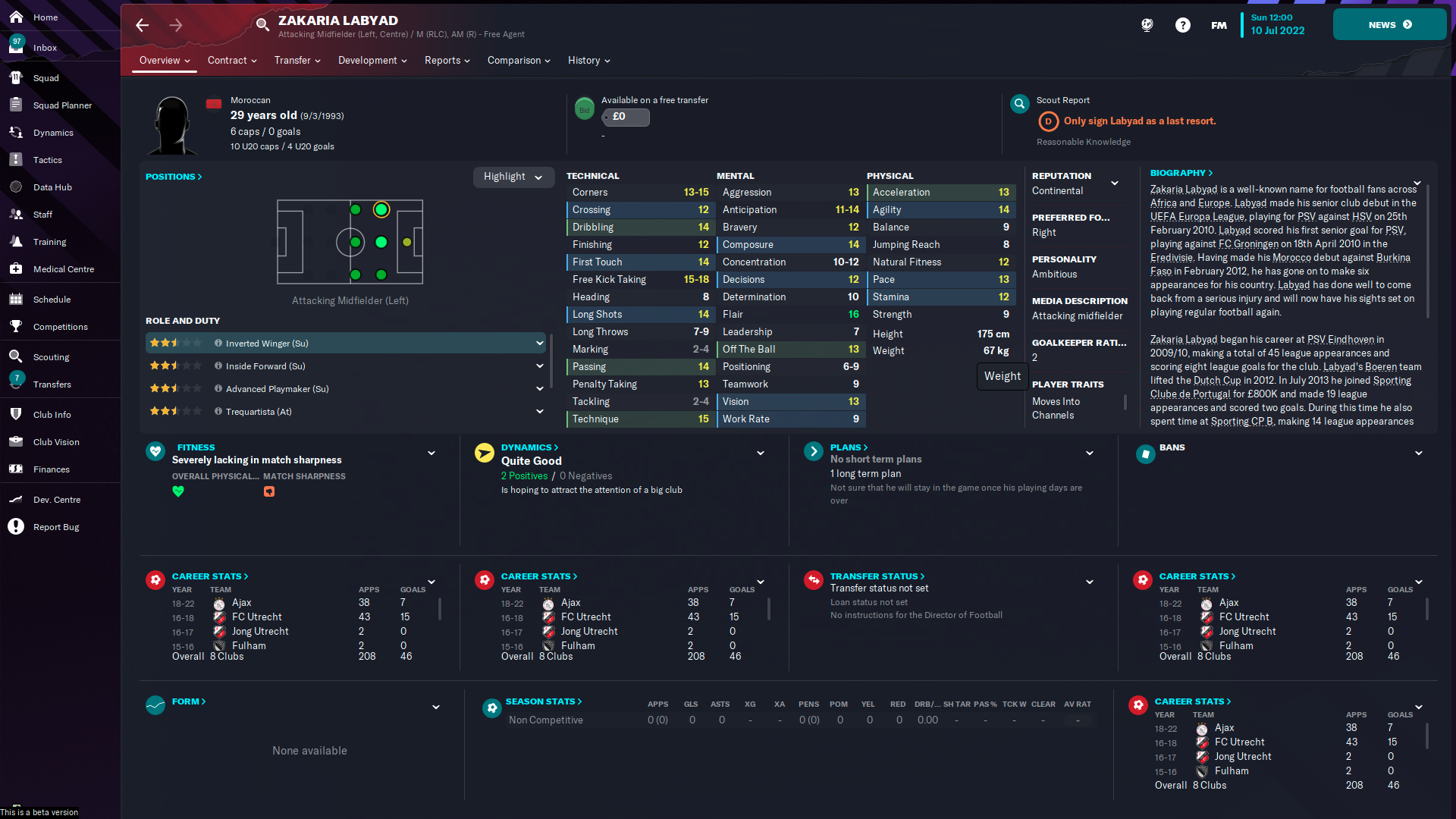 A name that will be familiar to those FM veterans out there, Zakaria Labyad. Or, if you’re a Fulham fan, then you may remember his failed loan spell at Craven Cottage, where he managed just two appearances before being sent back to Portugal.

The 29-year-old, who has been a go-two youngster in previous editions of Football Manager, has just come off the back of an underwhelming four-year spell at Ajax. There is obvious talent there, with excellent technique (15), flair (16) and dribbling (14), but his work rate (9) and determination (10) have often let him down.

Nevertheless, if you are managing outside of the top-five European leagues, or you are managing in the bottom half of them, then Labyad could definitely provide a creative spark in behind the striker. Comfortable playing from the left, as a number 10, and also from the right, the Moroccan is a versatile attacker that in the right set up could perform extremely well. 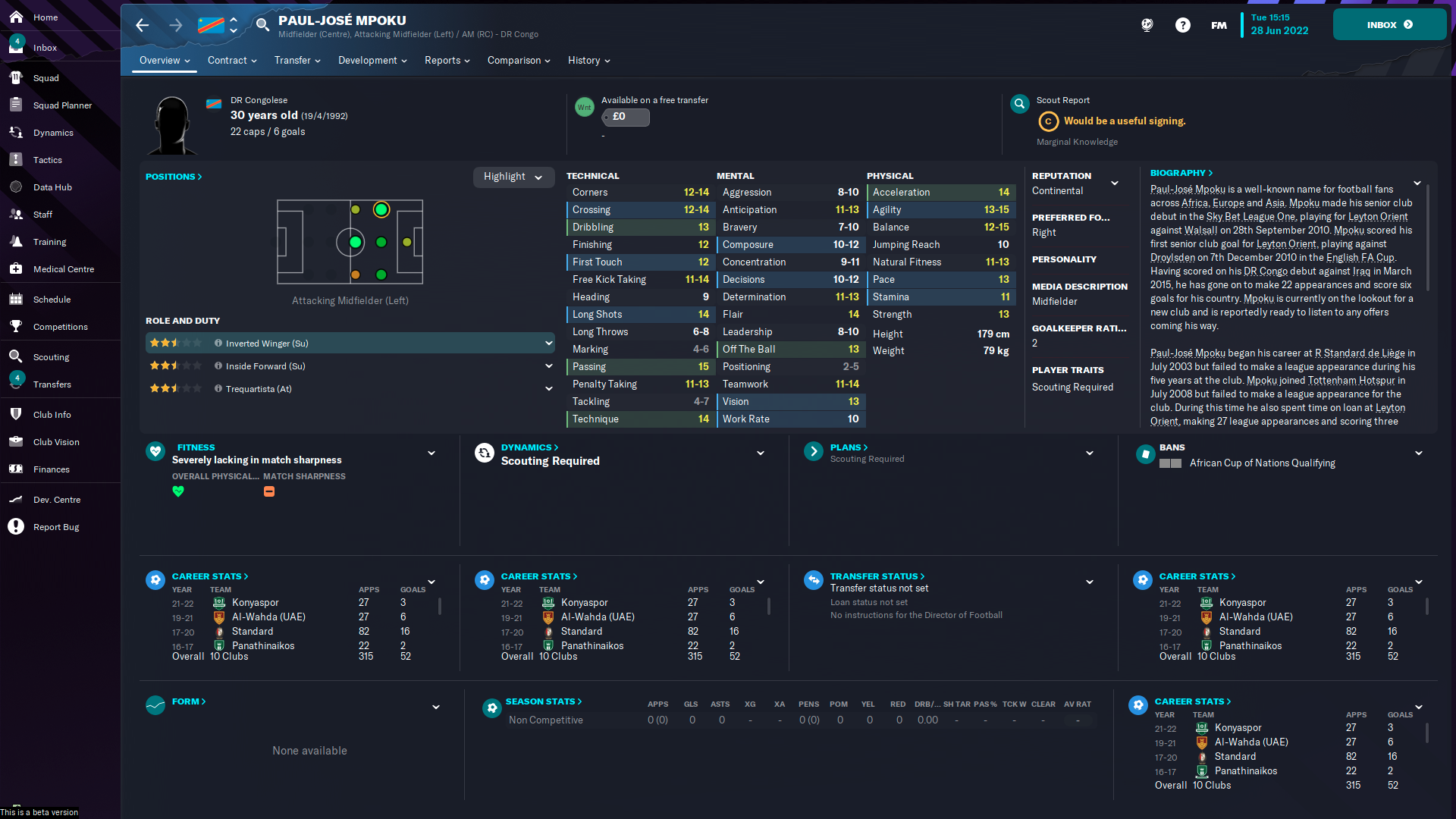 Paul-José M’Poku has had quite the journeyman career so far. Growing up in Belgium, the now Congolese winger played for the Red Devils throughout his youth career, all the way up until the u21s. He has made over 150 appearances for Standard Liège in the Pro League, across two different spells, and more recently appeared for Turkish club Konyaspor.

At 30 years old, M’Poku is approaching the tail end of his career, but is still highly rated by the FM23 scouts. His acceleration (14) and pace (13) are still good enough to cause full-backs problems, and with excellent technique (14) and passing (15), the Congolese winger is capable of feeding your strikers with quality chances.

Another free agent who has the versatility to play all across the front line, and also slightly deeper in the number eight position, M’Poku has a lot of useful attributes. For those of you that are looking to add strength in depth, without denting the transfer budget, then the former Tottenham youngster should be a must-sign. 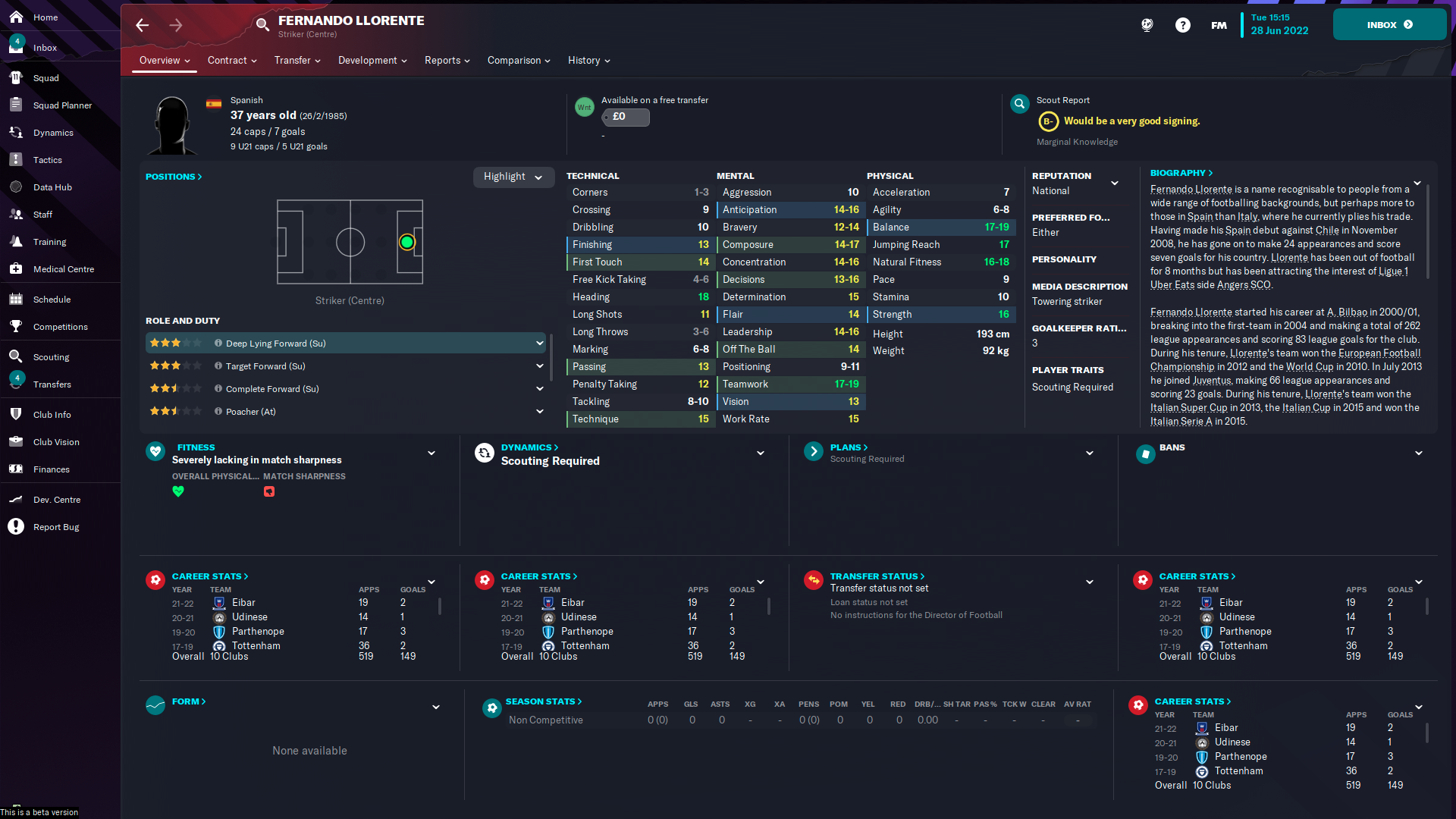 Fernando Llorente, what a player he has been throughout his career! Now at 37 years old, the former Spanish international is not going to be a long-term signing, but he almost guarantees goals in the short term.

Llorente made a name for himself at Athletic Bilbao, famously scoring in both legs of their Europa League round of 16 clashes with Manchester United. Since then, he has gone on to play for Juventus, Swansea, Tottenham, Napoli, and most recently Eibar.

His acceleration and pace are almost non-existent, and he isn’t going to be a player to run the channels or chase every loose ball but play to his strengths and he has the perfect attributes to play my favourite striking role in the game, target forward on support.

At 193cm tall, with superb jumping reach (17), strength (16), and heading (18), Llorente is a bit of a cheat code if you can provide him with the right service. His mental attributes, shown in the picture above, are excellent, and he is still as fit as a fiddle with 16-18 natural fitness.

Even if you just sign him for pure nostalgia, Llorente should be lurking on most users’ sub-benches to send on as a plan B when things aren’t going your way. 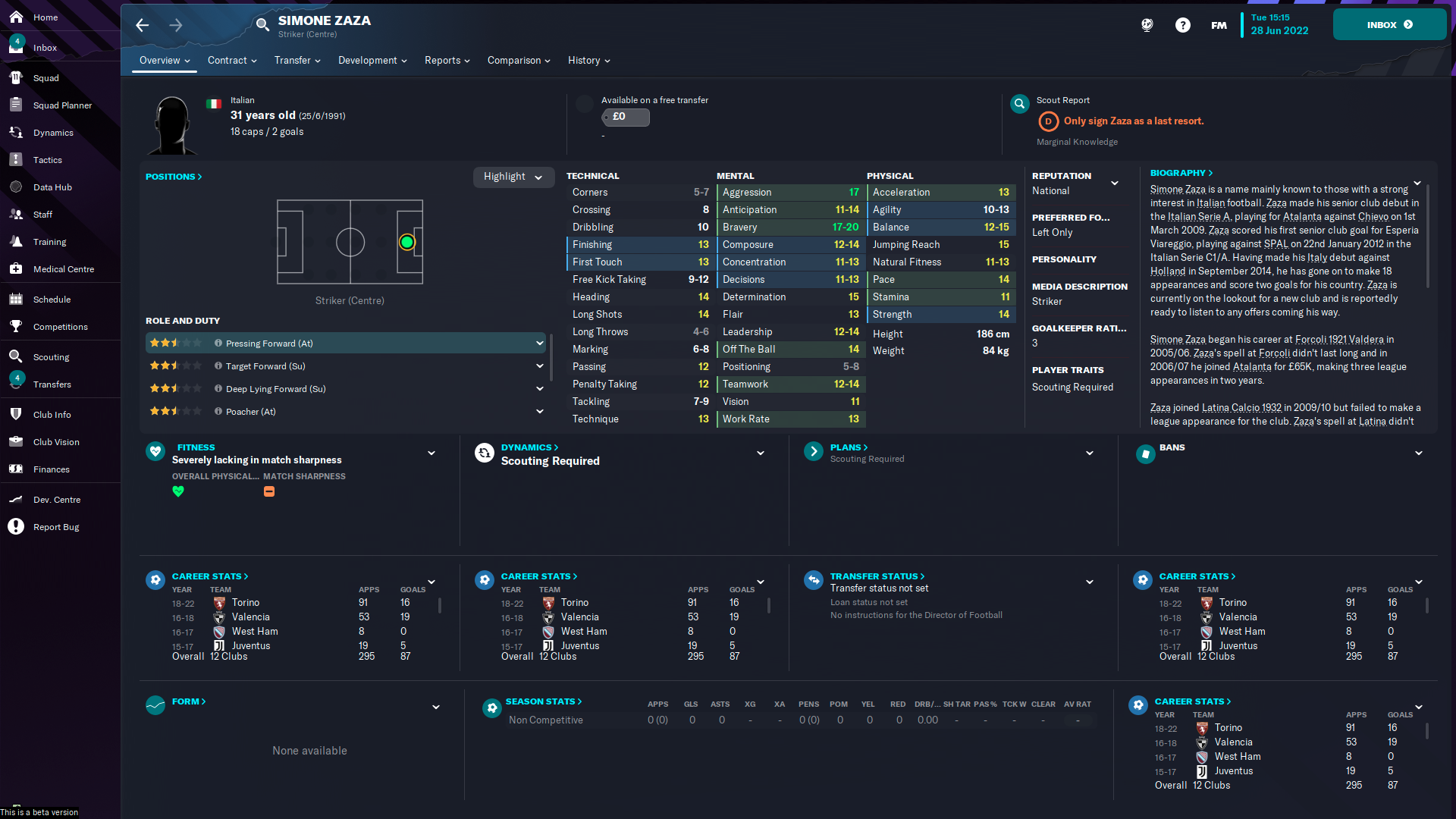 What a fall from grace this man has had. In 2016, Simone Zaza looked destined to be Italy’s number-one striker for years to come. Six years and the cringiest penalty in history later, and the number nine finds himself without a club. Traumatised by his eight-game spell at West Ham, I don’t think he will be in any rush to return back to England.

He had since found a bit of form at Valencia, luckily just dodging Gary Neville’s reign, where he scored 19 goals in 53 games, a good return on paper. However, he fell out of favour in Spain and was loaned out to Torino, although his time in Turin was cut from a similar cloth, as he spent most of his time playing second fiddle to Andrea Belotti. Zaza’s contract was terminated by mutual consent at the beginning of the 22/23 season, even despite the departure of Belotti to Roma.

Whilst his career has taken a bit of a nosedive in real life, virtual Zaza still possesses some excellent stats on FM23. With good pace (14), acceleration (13) and off the ball (14) movement, he is capable of playing several different roles in the number nine position. His 17-aggression paired with the ‘argues with officials’ trait is sure to bring a few yellow cards, but the Italian is still a reliable source of goals for most top-flight teams. He also has a venomous long shot, which seems extremely overpowered so far on the beta. Just don’t put him anywhere near penalties…

Preorder Football Manager 2023 through our friends at Fanatical and get 30% off by using the code FM23DAILY. This makes it the cheapest price around! Click on the image below...
Read more
© Copyright 2022 - Ronnie Dog Media All Rights Reserved.