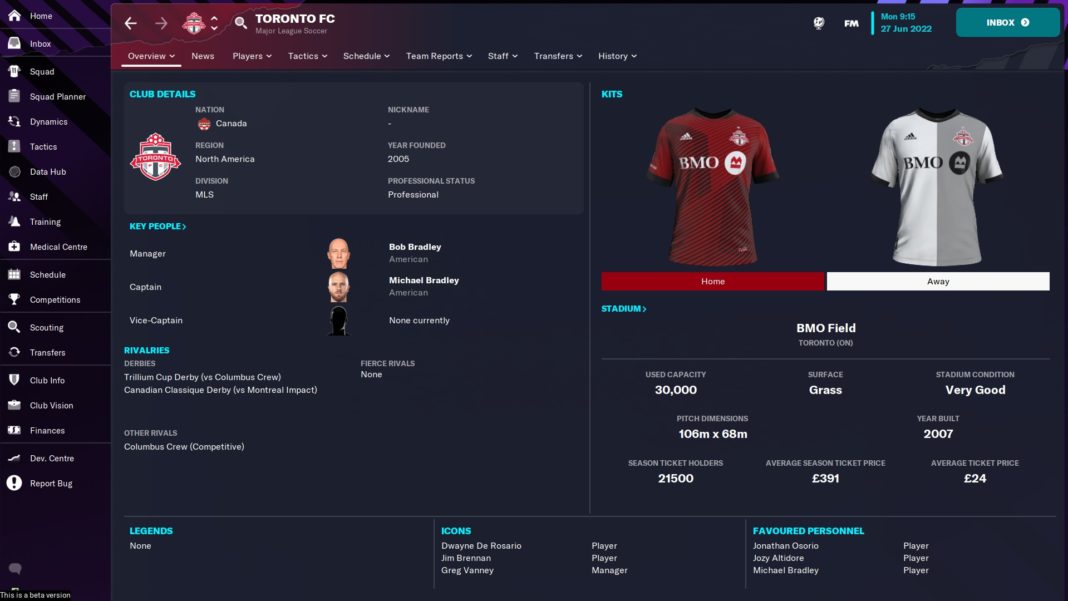 After months of waiting, anxiously checking the Football Manager Twitter for updates and @ing Miles Jacobson asking, “are we there yet?” like you’re one of Nia Long’s irritating kids to Ice Cube, we have finally made it. Football Manager 2023 is here.

Or rather, a version of Football Manager 2023 is here. If you’ve pre-ordered a copy of the game, you’ll have found out that you have access to the Beta – but what exactly does this mean?

The Football Manager Beta is released roughly two weeks before the official game is available for purchase (November 8th), and is an almost complete version of the game. Despite it being a reward and a thank you for those gamers that pre-order the game year after year, it is also integral for Sports Interactive’s development of the game.

Whilst the majority of bugs and glitches will have already been ironed out during testing, it is inevitable that some will have slipped through the cracks – so having thousands of extra people suddenly playing the game will help pick up on those little errors and allow them to be fixed in time for the release of the final game.

Though you can continue your Beta save once the regular version comes out, it’s probably best not to do so until certain changes made to the editor and match engine have been made and any bugs have been fixed.

So, with that in mind, it’s best to just open up your laptop, download the Beta and crack on with a short-term save of a season or two that will tide you over until the main release – when you can focus on winning the Champions League with Marine using only homegrown players or whatever you’re into!

So, we thought we’d give you a little helping hand… 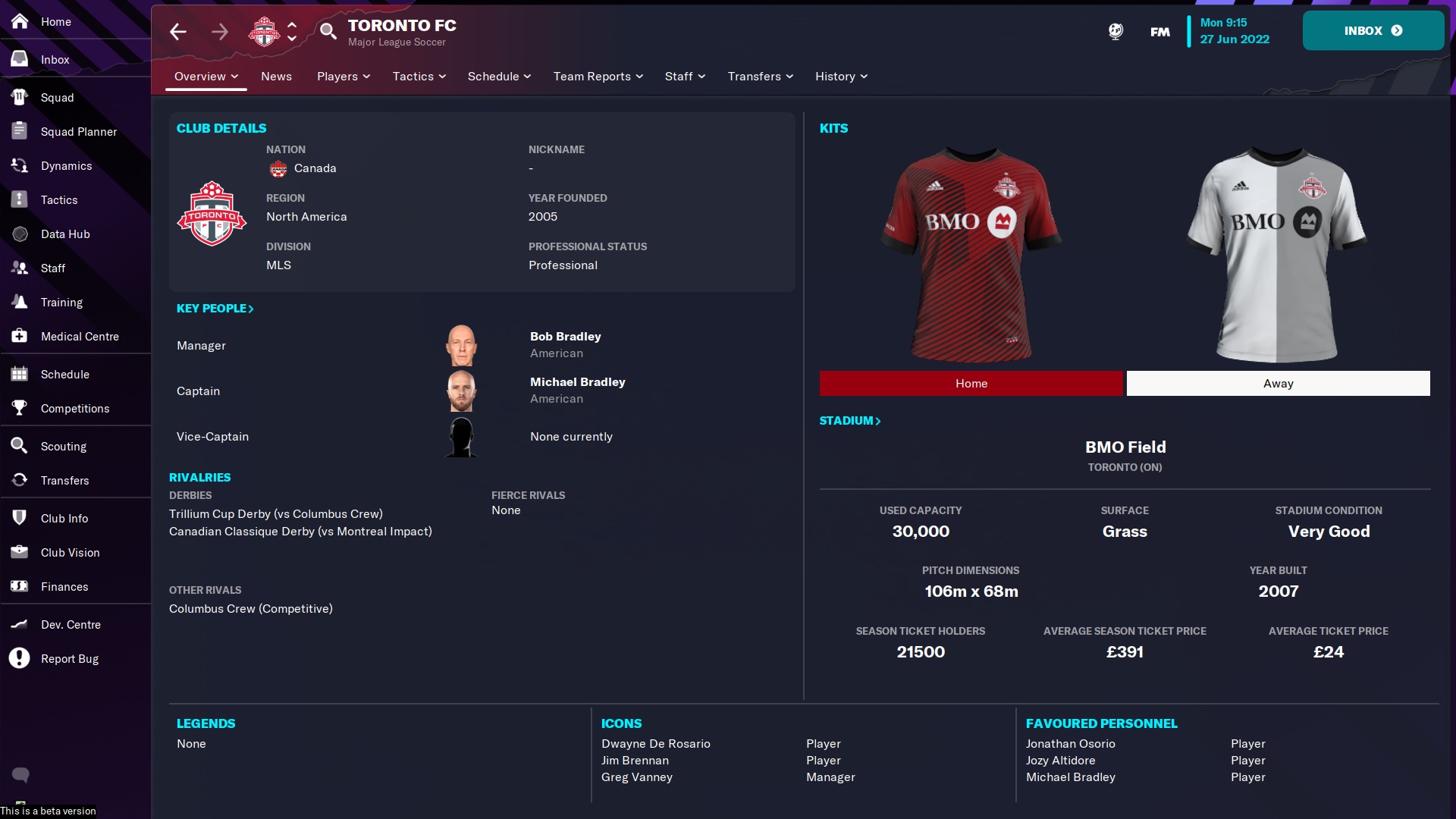 As traditionally the most successful of the three Canadian sides in the MLS (the others being Vancouver Whitecaps and CF Montreal), or as ‘traditionally’ as you can be when your club was granted entry in 2007, Toronto are the only ones to win an MLS Cup (in 2017), and even reached the CONCACAF Champions League final back in 2018 – losing out to Mexican side Guadalajara on penalties.

Since Sebastian Giovinco first rocked up from Juventus and stole the show, winning himself the MLS MVP in his debut season, Toronto FC and its fans have had a love affair with all things Italian, as evidenced by the street parties that were thrown when the Azzuri won the Euros in 2020.

Therefore, in July (when the MLS season is at its halfway point) when The Reds were struggling to find form in the MLS and languishing near the foot of the Eastern Conference, which other nation would they turn to?

In what can only be described as an unbelievable coup for an MLS side, Toronto signed Lorenzo Insigne from Napoli, Federico Bernardeschi from Juventus and, slightly less exciting but still Italian, Domenico Criscito from Genoa. Two very highly thought of Italian internationals, arriving at the peak of their careers, downplaying the ‘MLS Retirement Home’ stereotype that we’re used to, surely Toronto were going to rocket up the division, help themselves to a play off place before sweeping away all before them to claim the MLS Cup. Except, that’s not really how it went down.

Despite the best efforts of the two playmakers, with Bernardeschi scoring 8 and assisting 2 in 13 games, and Insigne scoring 6 and setting up 2 in 11 games, the Canadians finished… a very disappointing 13th place – with only Wayne Rooney’s DC United finishing below them.

*Bonus points if you sign another Italian along the way. 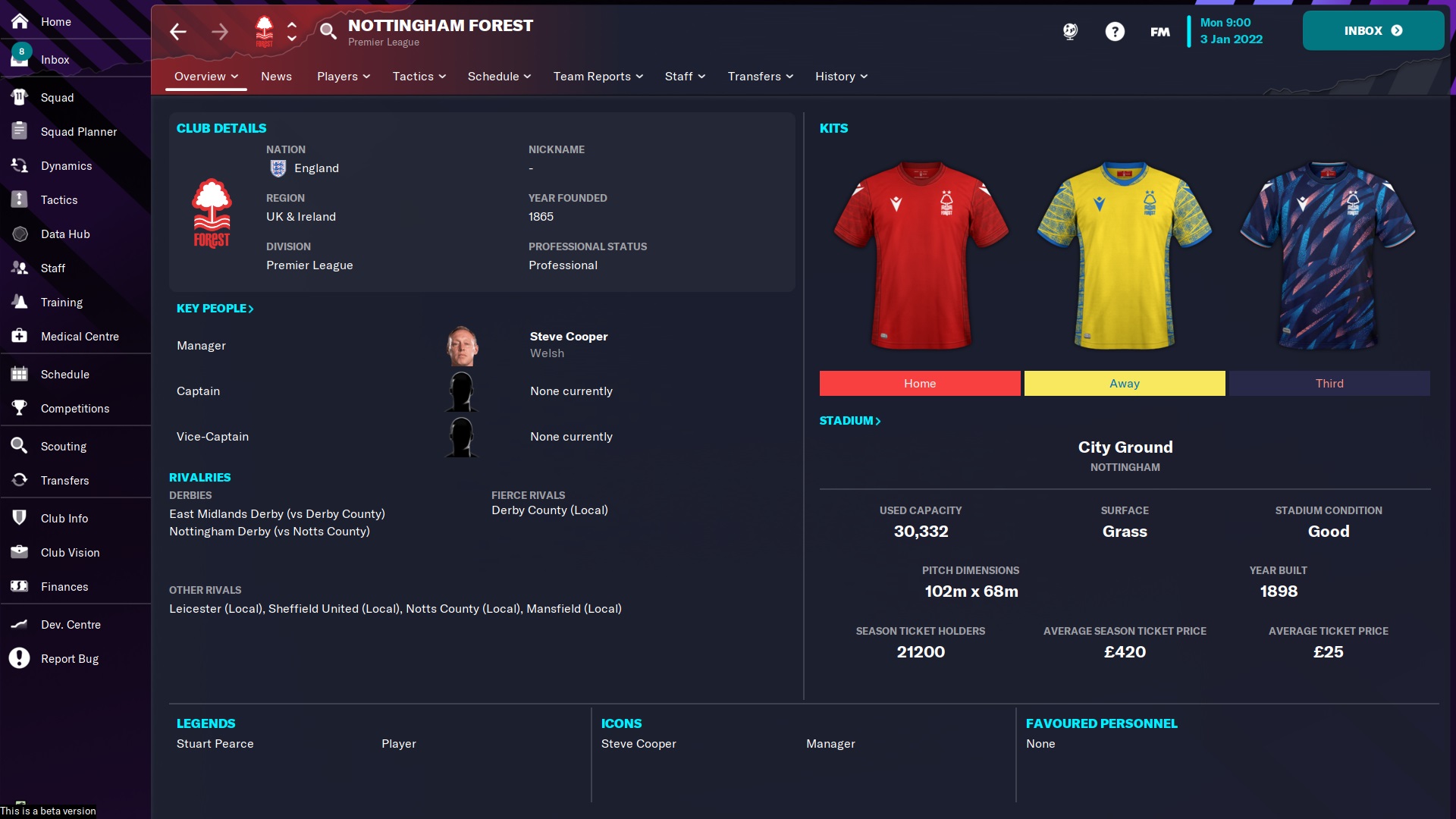 As any experienced Football Manager player knows, if there’s one trap you should avoid falling into when you get promoted it’s to avoid signing too many players. Sure, all of a sudden you find yourself with an extra hundred million or so, and it’s extremely tempting to begin signing all these fancy dans you’ve been scouting for years that rejected – but just remember how unsettled they’ll make your squad. Sure, sign three or four starters, but too many too soon will completely disrupt the squad dynamic. Maybe five or six, but that might be pushing it. Or, I suppose, you could just do a Steve Cooper and completely disregard all of this advice and sign an incredible 22 players and completely transform your squad. Why not, ey?

Two-time European Cup winners in ’79 and ‘80 under Clough, Forest then suffered relegation under their legendary manager in 1993. Things went from bad to worse in the mid-2000s as they spent a couple of years in League One before returning to the Championship. After a few brief, unsuccessful dalliances with the play-offs, it had begun to look as though a return to League One was more likely than promotion. When Steve Cooper took over Forest at the end of September, they were sat bottom of the Championship, only for him to inspire them to a fourth-place finish – and gaining promotion thanks to a 1-0 win over Huddersfield.

Whilst the jury is still out over whether Cooper can mould his random assortment of players into a side capable of beating the drop, though their recent win over Liverpool will have gone some way in reassuring some nervous Forest fans, I guess that’s something we won’t find the answer out for a couple of months. So I suppose, in the meantime, you can find out whether YOU can keep the club up with a whole squad made up entirely of players that I’d guess when doing a Sporcle on players that played for any of the Turkish big three clubs. 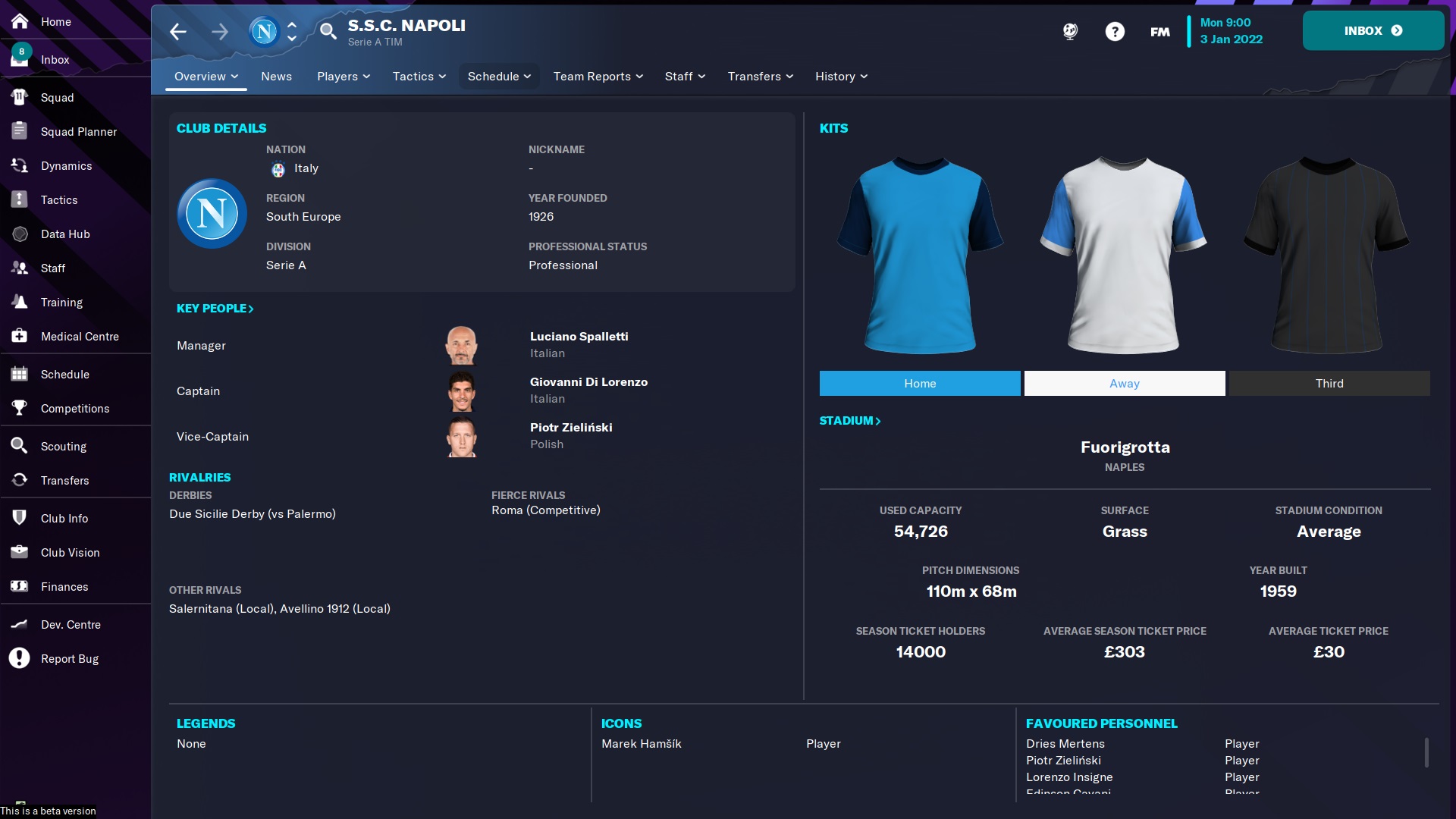 Right, I know what you’re thinking. Napoli… top of Serie A, top of their Champions League group, a squad made up of players such as Victor Osimhen, Piotr Zielinski and young Georgian sensation Khvicha Kvaratskhelia (spelt without consulting Google – honest) during a time when traditional powerhouses Juventus seem to be reiterating their support for the European Super League by purposely boycotting any form of UEFA competition – this should be a walk in the park.

But still, at the time of writing they are still only three points ahead of last season’s champions AC Milan, and they do have a history of taking title challenges down to the wire before bottling it when it comes down to crunch time, having finished in the top three 8 times in the last 12 years.

So, given that we’re looking at short-term Beta saves, your job is to guide the side from Naples to Serie A glory for the first time since the days of the legendary Diego Maradona. With both Milan sides beginning to return to their glory days, they will be your biggest challengers, although I doubt Juventus will be as bad in-game as they have been in real life of late. Throw in the likes of Lazio and Roma, and in a league where anybody can beat anybody, all of a sudden, the challenge doesn’t look so easy… 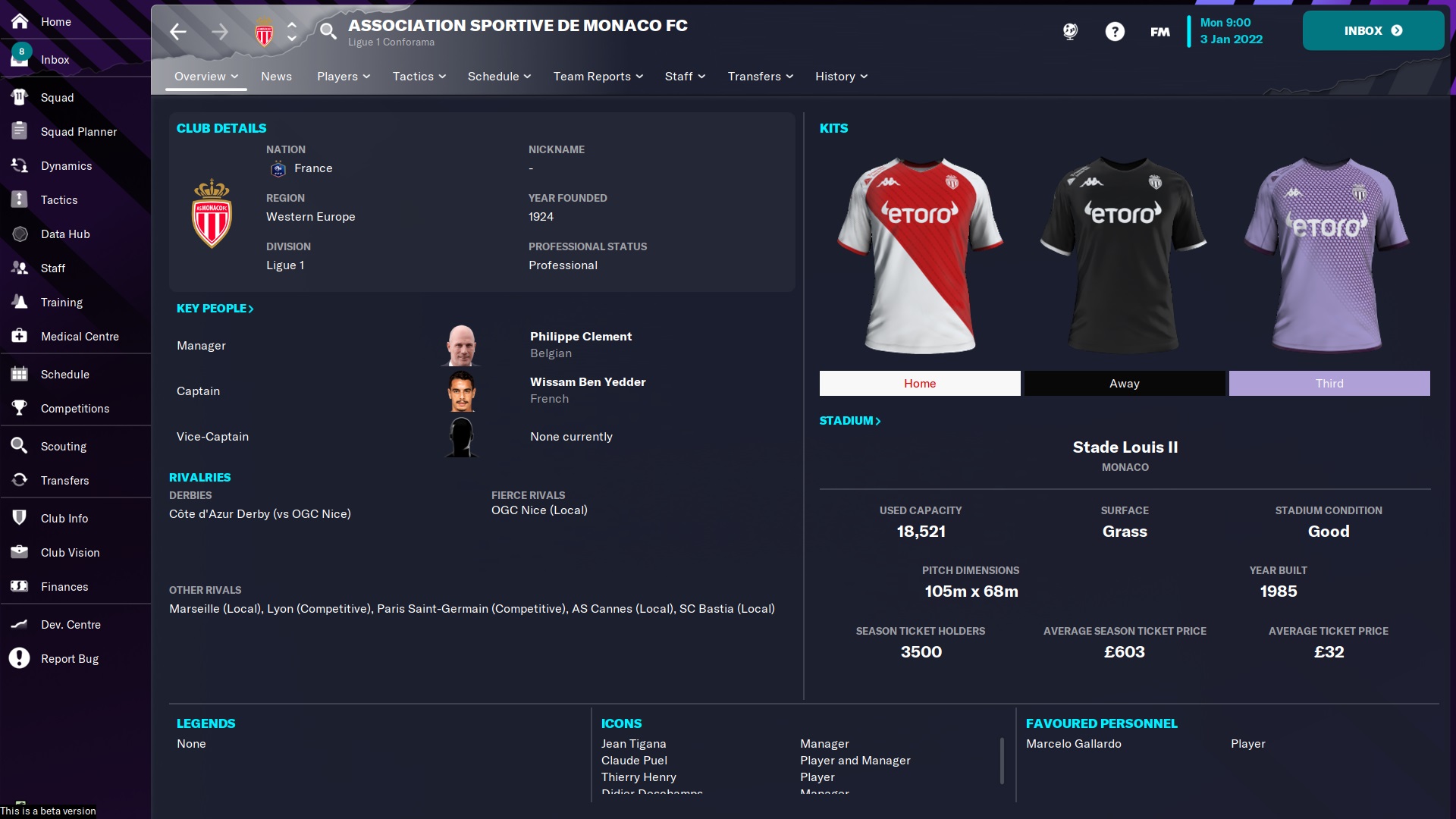 The whole point of a Beta save is to familiarise yourself with the new features of the game, challenging yourself slightly but not making things difficult enough that you want to lash your brand new £700 gaming laptop out of your second story window. With that in mind, I present to you… AS Monaco.

Of course – you know who Monaco are. For the slightly older generation, the image of the unique red and white diagonal shirt evokes recollections of a thrilling 8-3 tie against Deportivo on their way to a Champions League final 3-0 drubbing to a Porto side managed by a young ‘Special One’, Mr Mourinho himself.

For the younger, memories of the eight-time Ligue 1 winners revolve around their most recent title-winning side (16/17), who became firm favourites with football fans around the globe due to their endearing style of football and the young superstars that they assembled. Boasting the likes of Kylian Mbappe, Bernardo Silva and Fabinho, and governed by elder statesmen Joao Moutinho and Falcao, Monaco’s swashbuckling style led them to the semi-finals of the Champions League.

Things began to unfold soon after however, and their stars were cherry-picked by some of Europe’s biggest sides, leaving Monaco to plummet in the league table, finishing 17th and narrowly avoiding relegation by just two points. While things have improved, they haven’t finished above third place since.

Whilst it will be difficult to overcome oil-rich PSG, and their formidable attacking trio, Monaco have an interesting squad that may be ‘the best of the rest’. Boasting a selection of attacking options, such as Volland, Ben Yedder, Minamino and Embolo, they have a nicely balanced squad that pose a stimulating challenge as you aim to stop PSG from overtaking Saint Etienne as Ligue 1’s most successful club. Plus, they have a £17million transfer kitty there for any of your own additions that you may wish to make. 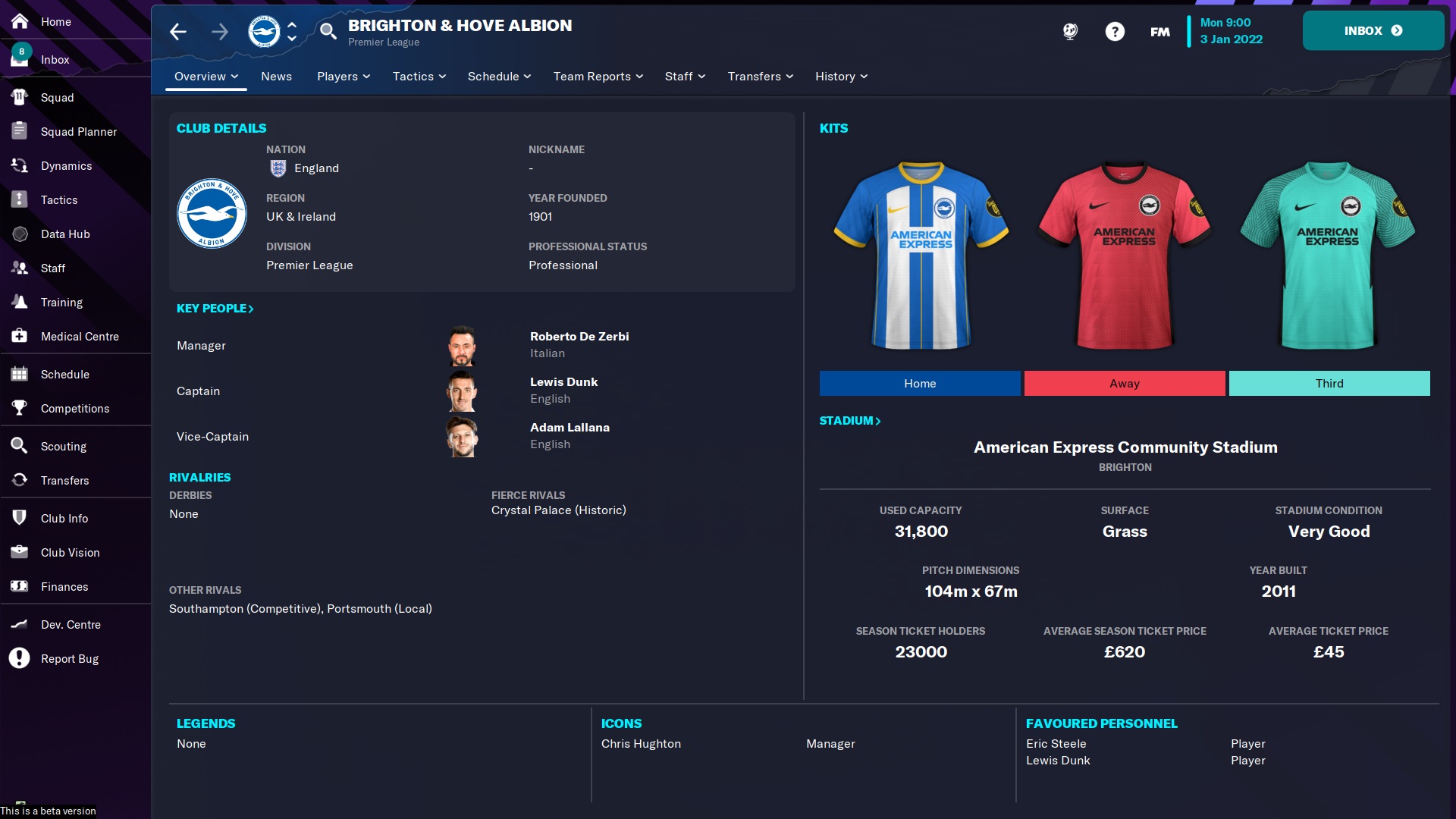 I was going to try to avoid advocating two teams in the same league, but Brighton are too tempting of a Beta save to leave out. With Potter having just jumped ship to Chelsea, and the De Zerbi revolution still in its infancy, you can jump into the managerial hot-seat with little guilt of leaving a well-established fellow manager spending his Tuesday mornings down at the job centre, watching all their hard work go down the swanny as you massacre their hard work.

Since gaining promotion back in 2017, Brighton have endeared themselves to many with their attractive style of football and the way they conduct their business in the transfer market. In some ways, neutrals found themselves drawn to them because of their ‘plucky and unlucky’ underdog status – we’ll ignore the fact they’re owned by a billionaire- as evidenced by their astonishing xG record, which during the 20/21 season calculated that if they’d won the amount of points they were ‘expected’ to, they’d have finished in 8th place, ahead of Arsenal, rather than the lowly 16th place they ended up in. Blame Neal Maupay I say.

Things began to change however, and they began to convert a few more of the chances that were created as they shot up the table, finishing in 9th place in Potter’s second full, and last, season in charge – again unlucky not to finish higher if you believe what the xNerds have to say. So your challenge in the Beta is this, can you continue with Potter’s hard work, having Brighton play a free flowing style of football whilst simultaneously doing what Potter failed to achieve – really challenge the big boys and take them into Europe?

Oh, and if you want to ignore all that and just go them because they’ve got £70million to spend, and a nice, short-term Beta save is the best time to splash all the cash with no consideration for the potential negative impact down the line – then Brighton are the side for you!