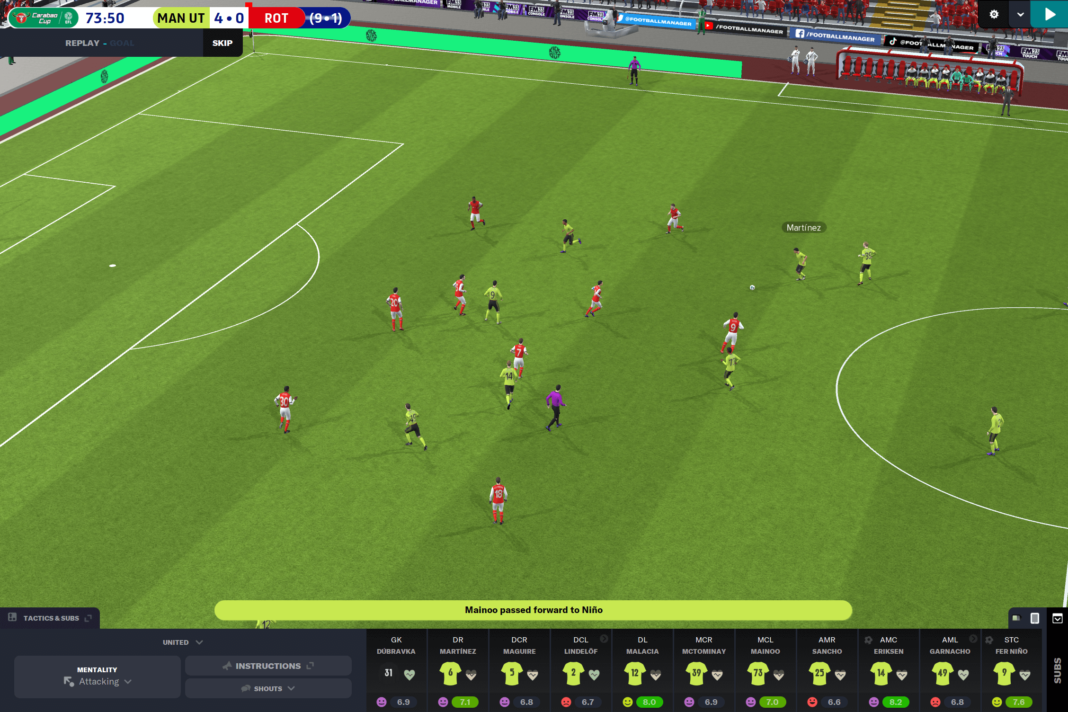 This article was previously on manunitedanalysis.com

The quest for glory continues, but it may come sooner than expected. In the previous article of the series, we reached the 2022 World Cup break after an incredible start to the season and save. The focus of that article was to use the data hub to take a look at past results and understand how exactly we were performing. After the preseason, our tactics continued to develop into the philosophy I truly wanted, so in combination with the data hub, we also looked at the tactical tweaks that got me there.

Although we were doing extremely well, there was some uncertainty in our performances. In various scenarios, we got extremely lucky with expected goals factored in. Going into the second half of the season, my objective was to introduce more solid and consistent performances. A few months later, it is safe to say we have done exactly that.

As the cups began and the league picked up, we went into excellent form. This article will provide a brief update on our first season in charge of the Reds so far, but the main focus of it is the new squad planner. As our first full summer approaches, we will slowly begin shaping this Manchester United squad to our liking.

As we enter February, we haven’t lost in a very long time. In the 14 matches since the last article, we have won 13 and drawn one. With 50 goals scored and just six conceded, it is fair to say the Reds are finally a dominant force in English football again. Although the cup matches were against some Championship sides, we still took care of business day in and day out. 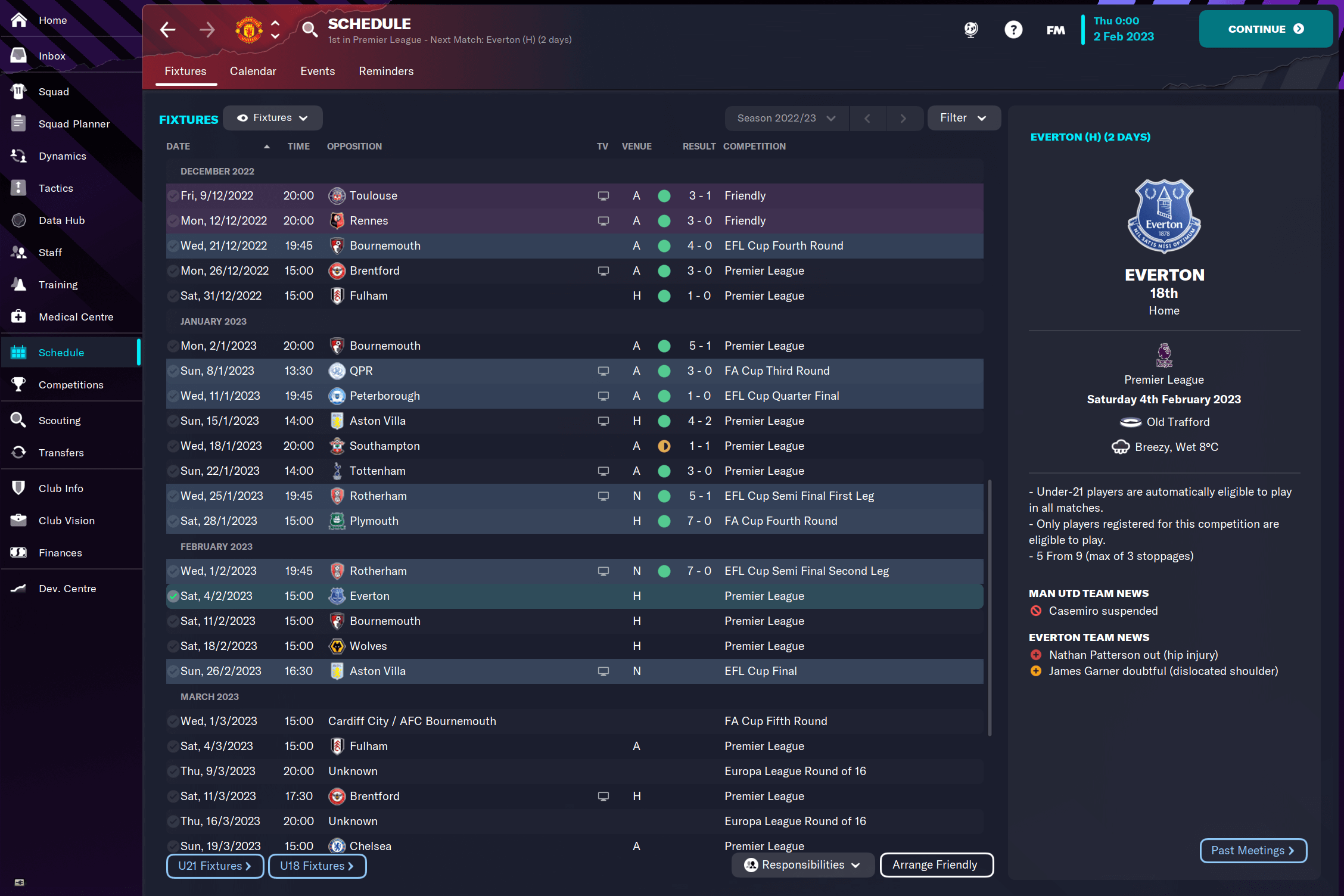 March is approaching, and the most important part of the season is coming. It is crucial to maintain our good form going into it, and if we are able to do it, we can change our expectations for this first season in charge. In the Premier League, we still sit at the top, four points ahead of Man City, although they have one game less. We remain strong in both cups, and in Europe, we have yet to find out our round-of-16 opponent. We have real chances of winning all of our competitions. The busy schedule may be our toughest opponent, but if we play our cards right, a historic quadruple may be in the works.

In this period, some players have stood out and become crucial pieces of this side. Aaron Wan-Bissaka has 13 assists in 19 games, becoming one of our main creative forces. Luke Shaw has 12 and Tyrell Malacia has nine. Unfortunately, Diogo Dalot has not been as effective. Nonetheless, it is fair to say our wing-backs are essential to how we play.

We can see this below, in the pass map of our 7-0 thrashing of Rotherham. The wing-backs, despite being fullbacks, are isolated in the wide channels and crucial to providing support in the final third. Centrally, it is simply natural. With the instruction to be more expressive, players roam freely while still maintaining balance. This has definitely proven successful, and our playing style is just like I wanted it. 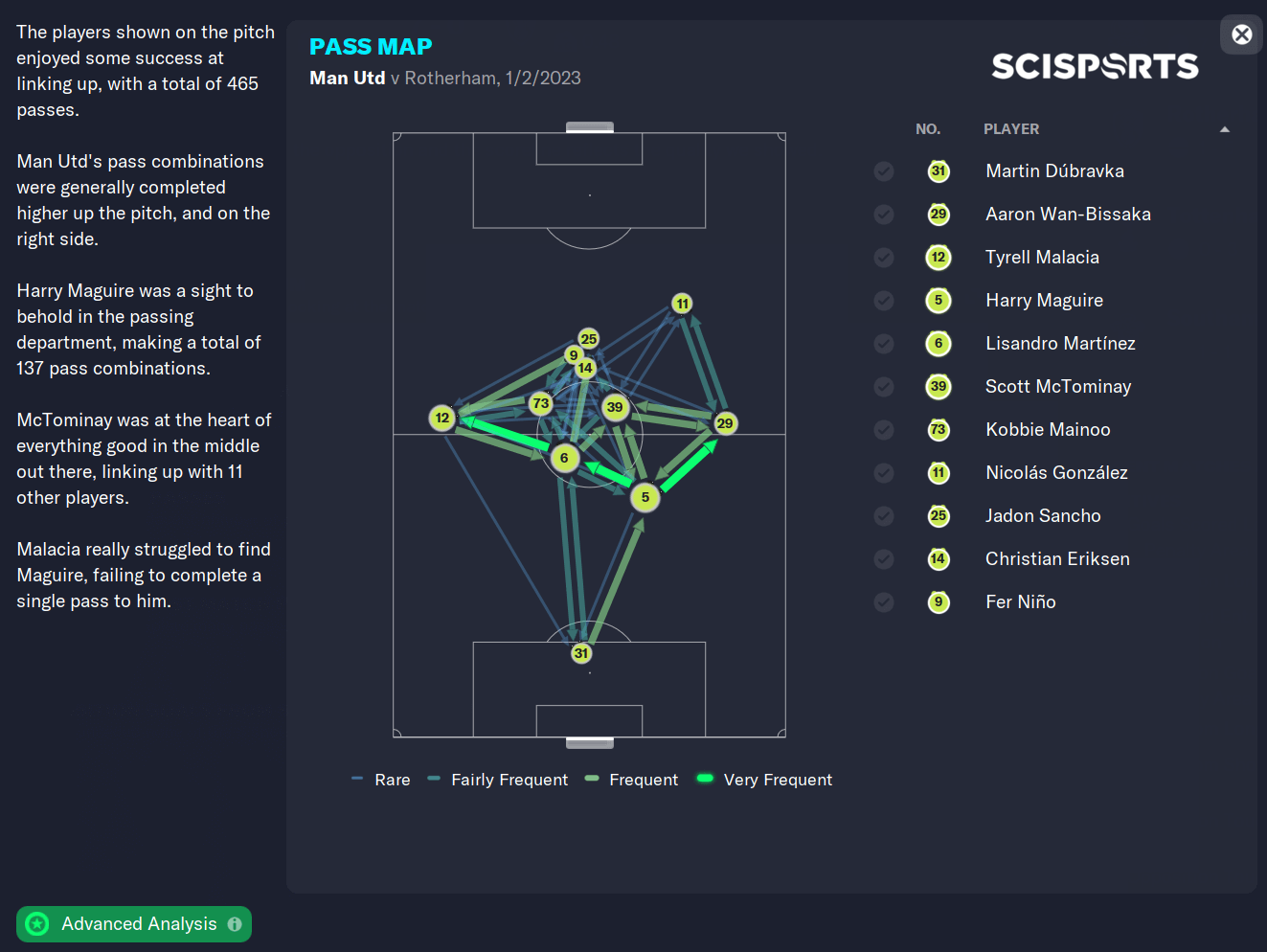 In a few instances, I have experienced with a slightly tweaked formation using an inverted right-wing-back. This creates an overload in the midfield and makes our structure even narrower. For this role, Lisandro Martínez has been our go-to option. With the meteoric rise of Fernando Diniz and his alternative method to possession, I wanted to replicate a similar philosophy with United. I’m happy to say we are there right now, as seen below. 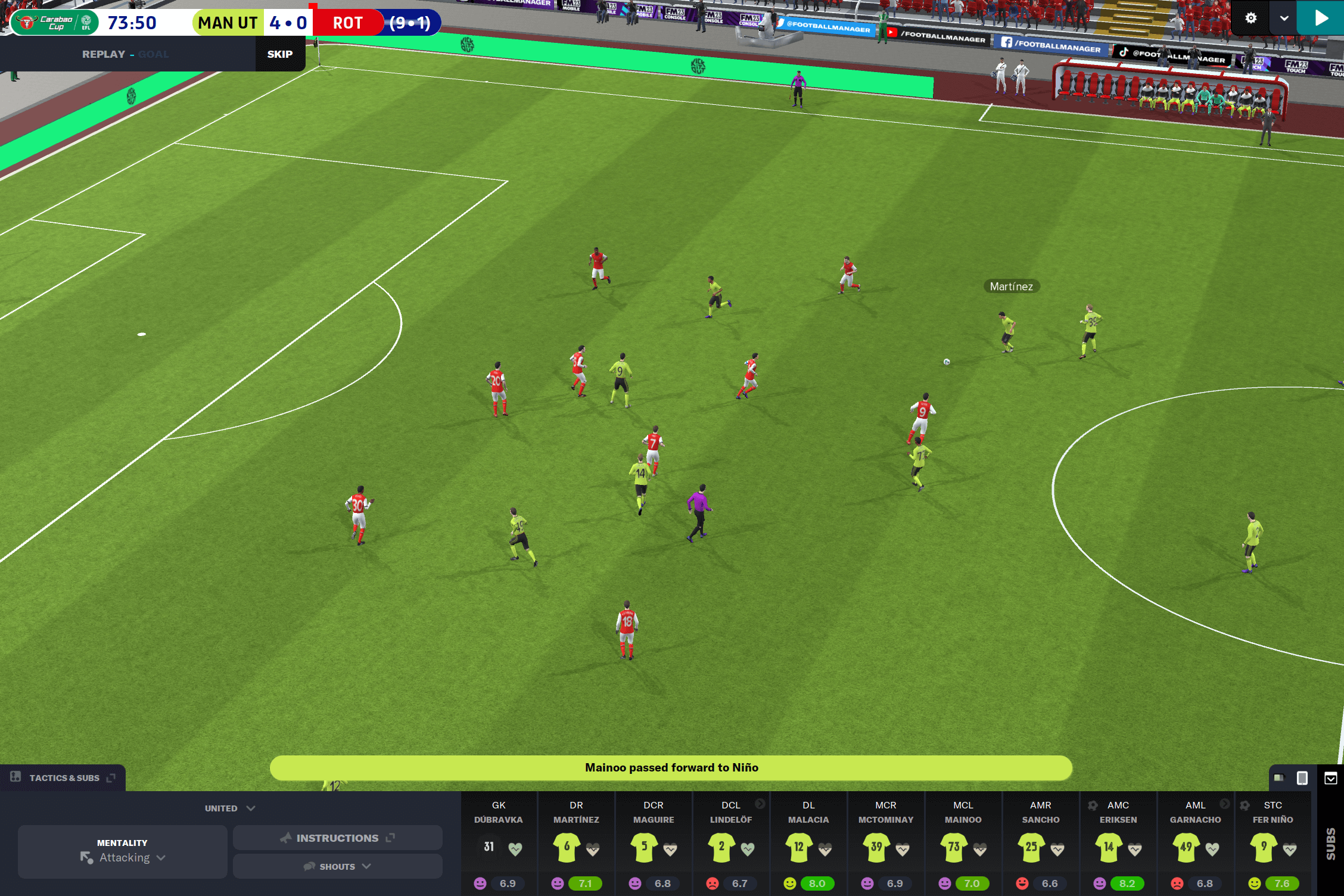 Finally, our new signings have been on absolute fire. Fer Niño has 18 goals and three assists in 22 matches. After a slower start, the 22-year-old has been excellent and will definitely be Ronaldo’s replacement after he leaves. Similarly, after a very slow start, Nicolás González has 15 goal contributions in 25 matches. They have become integral parts of our system, and at such a young age, they will be Reds for a long time to come.

The squad planner is one of the most exciting additions in FM23, and as we head into our first full summer, it has been extremely useful to plan ahead. In this section, we will use it as I guide you through our plans for the summer, and for the next few years.

First, though, I signed one player in the winter transfer window. Looking ahead to our centre-back options for the future, I decided it was important to go after one. We didn’t need one immediately though, so I lowered the age profile and targeted young left-footed centre-backs. After further scouting the players on our shortlist, I landed on 19-year-old Valentín Gómez.

The Argentinian comes from Vélez Sarsfield and should start becoming a part of our senior squad in a year or two. For the remainder of the season, he will play for Burnley on loan in order to gain experience. He is a technical centre-back with an extremely well-rounded profile – very similar to Lisandro. 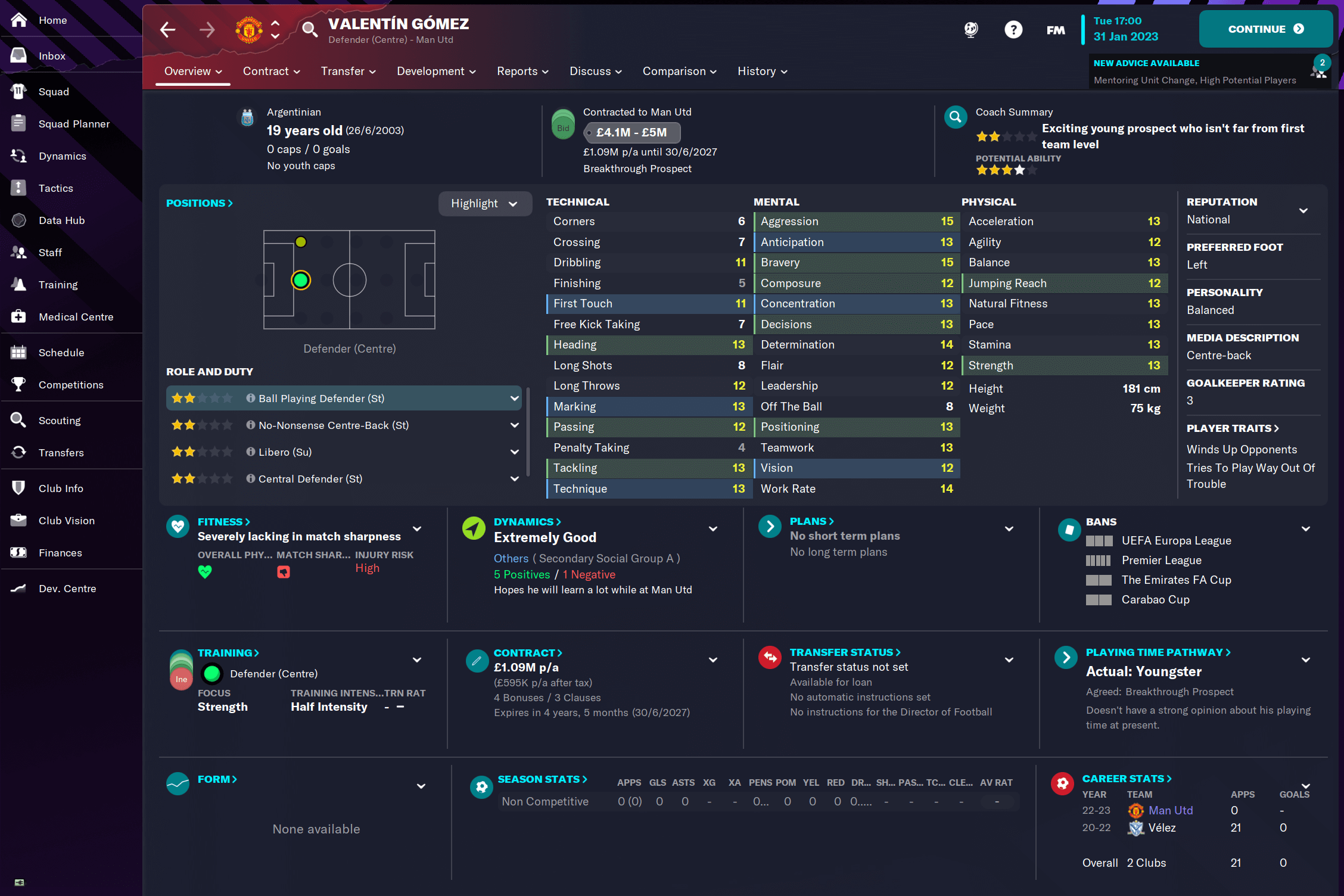 In fact, the centre-back position is giving me a huge headache. All four options have performed extremely well this season, and there is no urgent need to replace anyone. However, Raphaël Varane, Harry Maguire, and Victor Lindelöf will all be 29 or 30 years old next season. It is time to begin rejuvenating the position and moving on from a few players.

Lindelöf’s contract expires at the end of next season, so replacing him this summer could be an option. However, I could hold out on that decision until the following summer, and either let him go on a free or renew his contract and sell Maguire instead. There are multiple alternatives in the central defender department, but this transition to the next generation has to be done carefully. 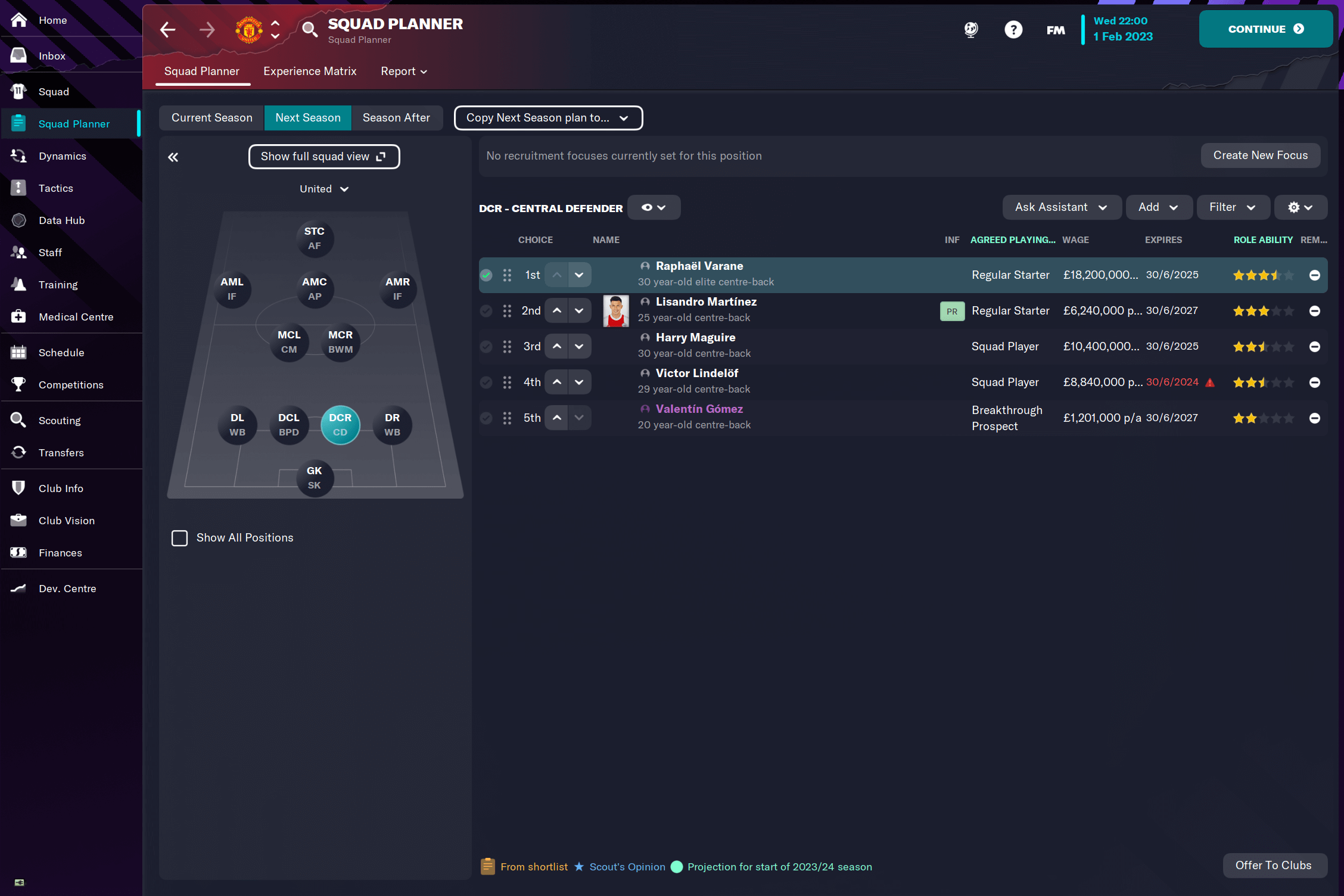 This is what the overall squad planner looks like for next season. David De Gea’s contract expires along with the other two goalkeepers. Dean Henderson, however, will be back from loan. My number one priority this summer is signing a first-choice goalkeeper – preferably Alban Lafont – and having Henderson as the backup.

The fullbacks will continue for years to come, with all of their contracts either having some time left or being recently renewed. Álvaro Fernández has progressed extremely well, so he could join the first team very soon. On the right, if Dalot keeps up his bad performances, he may be replaced – I will give him time though. 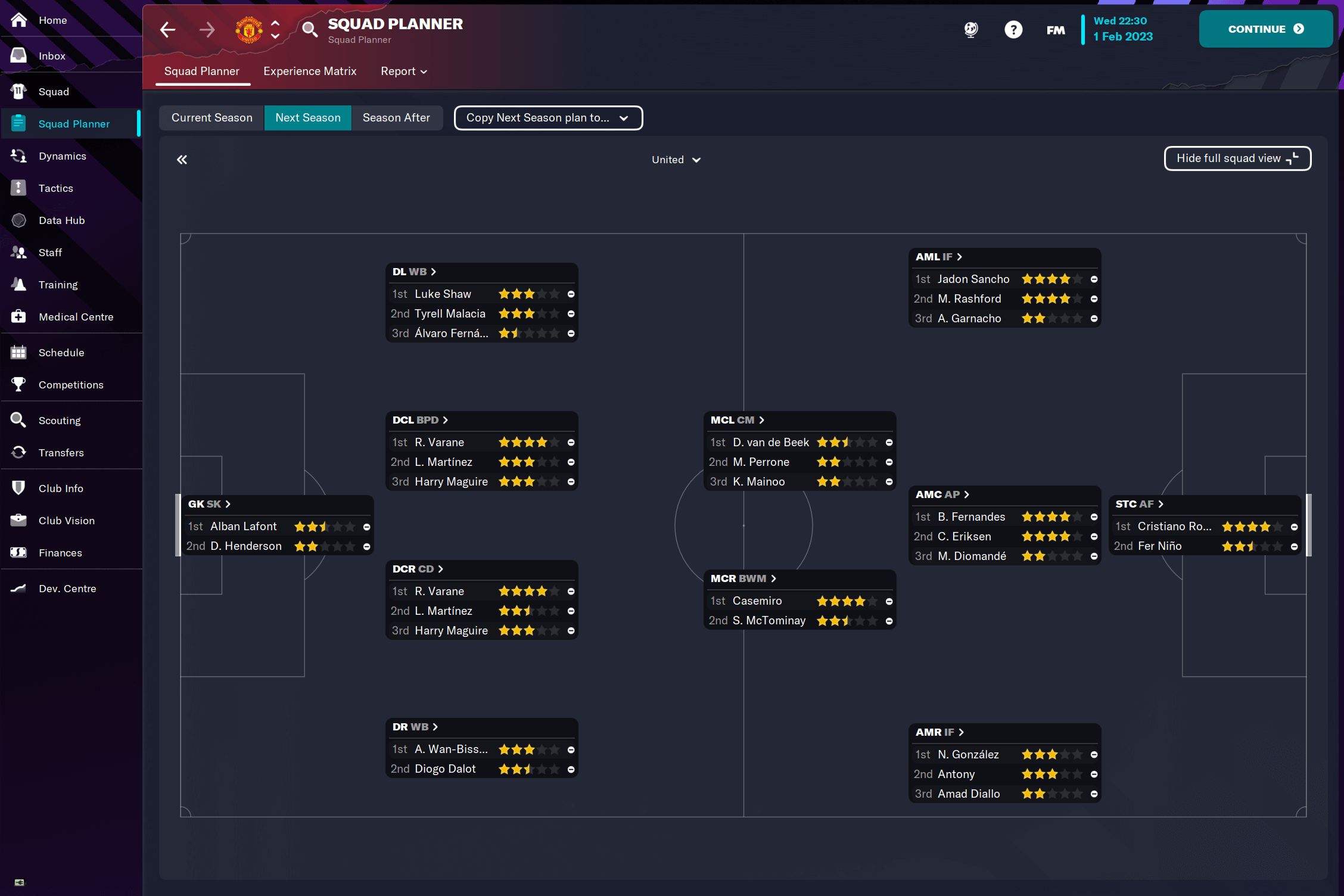 The midfield can be broken into two parts. The first is the double pivot, with a more technical player and a more defensive one. For next season, Scott McTominay and Casemiro will be the latter. Casemiro will probably finish his contract, but McTominay may be replaced with a younger player who can go on to become the first choice after Casemiro.

In the other role, we are set. Fred’s contract will expire this summer, and as he is currently the second choice behind Donny Van De Beek, he will be replaced by 20-year-old Maxi Perrone, who is already in the squad. 17-year-old Kobbie Mainoo has also participated in the cups and will continue to develop.

At the 10, Bruno Fernandes will be our first choice for years to come. Christian Eriksen is 30 though, and he may be sold after next season. By then, Mohamed Diomande and Hannibal will be ready for the senior squad. Both wings are set for years to come, especially with players like Alejandro Garnacho and Facundo Pellistri coming through the ranks. Finally, during the World Cup break, I decided to trigger Cristiano Ronaldo’s extension clause. The club legend will be with us for another year, as Niño continues to develop. 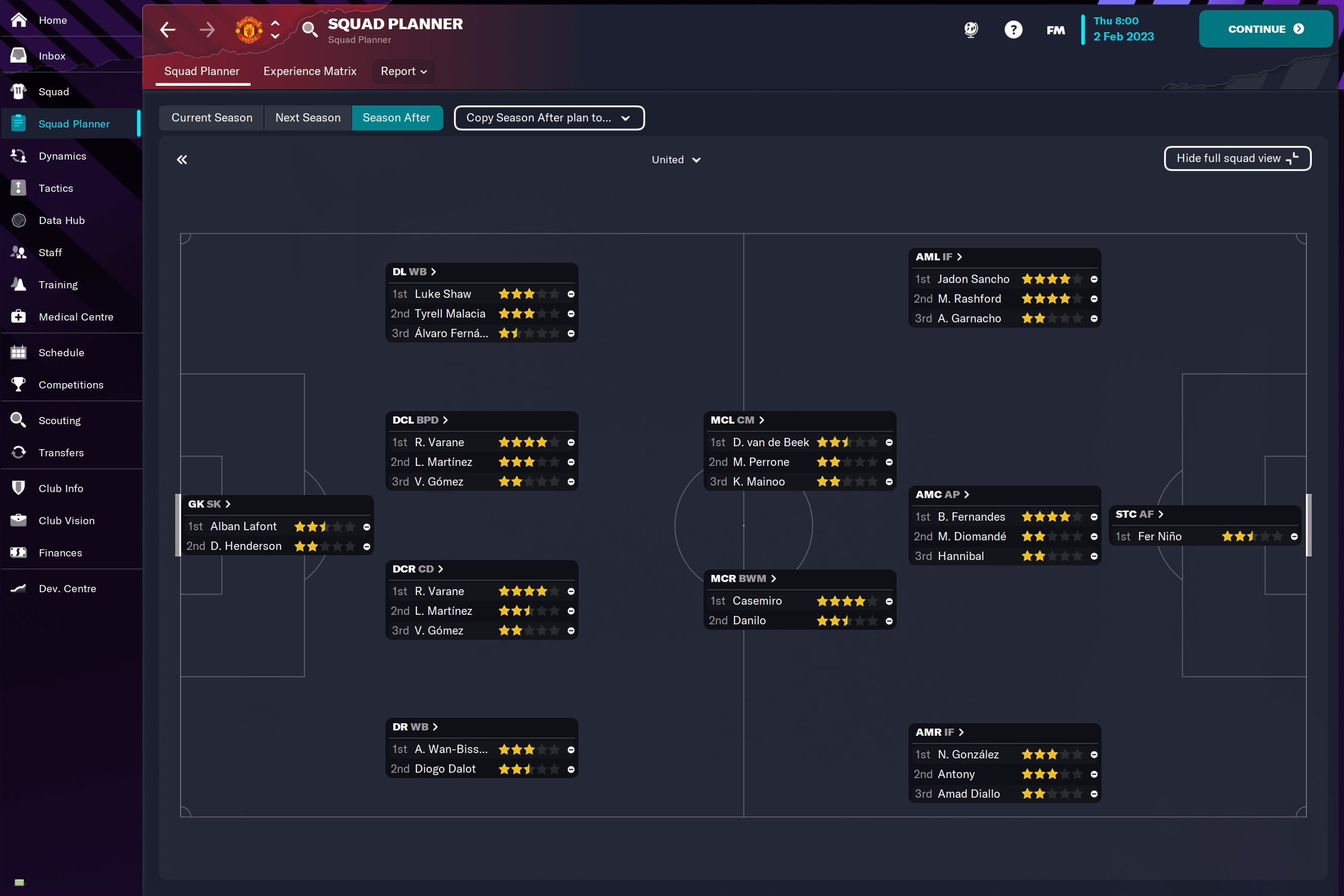 The squad planner for the following season looks quite similar, but with a few changes. We have already gone over the centre-back position, but in the midfield, I put 21-year-old Danilo, who is at Palmeiras, as a possible replacement for McTominay. Up top, I will have to start searching for a second choice number nine. Of course, depending on form and performance, some players may be replaced. That is quite specific though, and this is the overall idea.

Our first season with the Reds continues to exceed expectations. In the next article, we will have wrapped up the season, and probably the summer window as well. The Premier League title is entirely in our hands, but it will be difficult staying away from City. If we do that, we could pull off a historic quadruple. Nonetheless, it is already time to start planning ahead for the next few seasons. With so much young talent in the squad, we look set for the future.