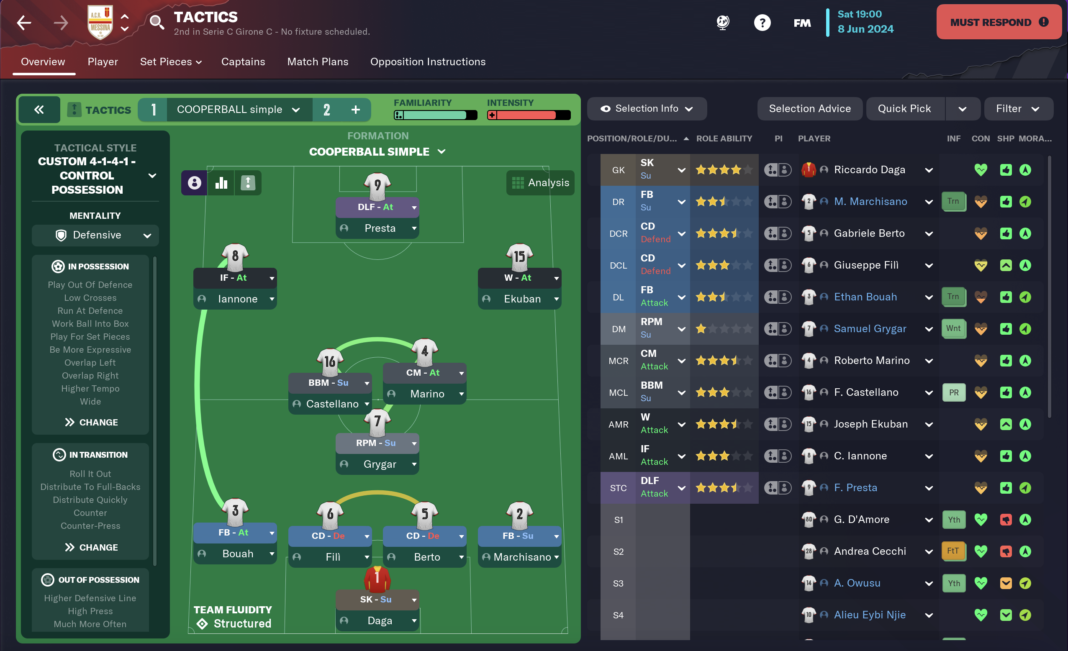 I’m back in Italy, needing a break from Africa after two successful seasons in Zanzibar (spoiler alert, and I’ll write up the latest from there soon enough).

It was good fun to come back to the Messina save – when I left you in part III we had just won the season opener against Rimini in the Coppa Italia with a squad constructed on thin air, buttons and favours from Serie A clubs.

Therefore, I felt optimistic that a team that was spending the least on wages in the division could be competitive enough to push for the playoffs again – even if common sense suggested we should struggle. 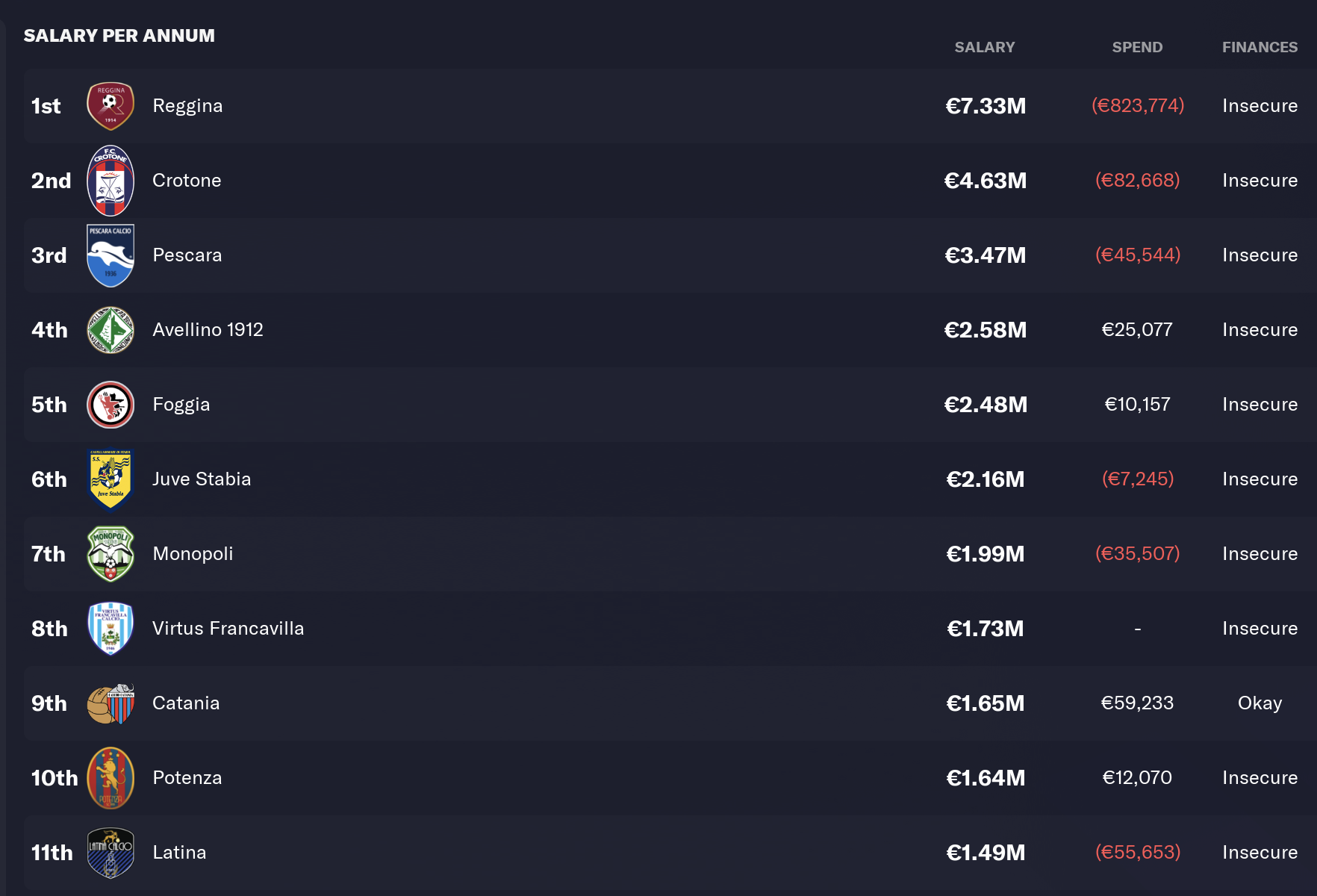 Reggina spend a full €6.9m more than us a season on player wages. That’s mental. Though, if Reggina steam through the league and win promotion it might not be that mental.

You can probably guess where this is leading…

Two games to go, it is neck and neck between Foggia and, well, Messina for the Serie C Girona C title and promotion to Serie B. There is one point difference, Foggia have the advantage.

A victory for us would take it to the final weekend – victory for Foggia would mean we have to watch them lift the trophy in front of their own fans.

It’s what FM is made for – everything on the line. Their €2m wage bill excess against ours – OK, maybe FM isn’t exactly about that.

Foggia won automatic promotion in front of us, 2-0. We didn’t really turn up.

But, we finished second and licked our wounds with a Copa Italia Lega Pro cup defence winning the final 4-1 on aggregate against Novara.

And then to the playoffs, again!

Pro Vercelli were up first – we drew 1-1 at their place before a brace from Iannone and a third from Marino saw us through to the semi-finals 3-0 and 4-1 on aggregate.

We drew Cesc Fabregas’ Como – a lovely day out, you should try it. Again the first leg ended 1-1 away from home and again, we won the return leg at ours. 2-1, Iannone and loan-star Presta getting the goals.

The playoff final was against Juventus Next Gen – and we were perfect in every single way. It was a comfy 3-0 win with Presta getting two and Iannone getting the third.

We are going up!

Now, to the important stuff.

What does that actually mean to the squad and the financials?

Of the loan players, several of them are out of contract with their clubs and I am keen to retain the following on permanent deals with us;

The jury is out on Seedorf Owusu – I think I could probably do better.

The striker Presta, on loan from Fiorentina, almost did too well in getting 25 goals in 39 appearances (5 as sub). Too well? Yes, as he is still in contract with Fiorentina and they’ll probably want a loan fee for him next season – or for him to play with better players.

I brought in Eybi Njie, a tall Swedish RW/LW on a free loan from Torino in January and if he is available on loan again next season, I’d probably take him.

All that adds up to the following;

Now, I’ve worked our RWB(f) out to be €16,898.58 p/w next season based on a Serie C budget – and I think I will stick to a Serie C budget as I don’t want to gamble on us staying up by bringing in big-earners, obviously.

That works out as an average player wage of;

Interestingly, in Serie B the financial rules change and the minimum wage is €550 for players aged 25+, €400 for players aged 20-22 and €300 for 17-18 (goodness knows what that means if you are 23!). I don’t think this will effect me too much bringing in permanent signings externally as they are likely to want the €500ish wage if they are released from Serie A, I’d expect – equally, I am not going to pack the squad.

What do these numbers then mean so far?

Now, we coped with a squad of 11x contracted senior players, 6 Academy and 9 loans to win promotion.

Realistically, I cannot see me having a permanent squad of 18 contracted senior players – probably 15 maximum meaning I am looking for four more players and they can earn in and around €2,000 each. That means I could bring in a couple of A+ players to strengthen us (or I could spread the risk and keep aiming for multiple young talents and hope that two or three become stars quickly).

Equally, I do not know at this stage how realistic free loans of the right quality will be from Serie A clubs now we are in Serie B.

So, there are some unknowns.

Filli I am keen to retain but I doubt he will be a starter next season – and I think I am likely to release the other three.

I will need improved quality in DM/CM especially if I cannot secure the players who are on loan to permanent deals, so Mallamo and D’Amore won’t play. Spats, even if he is versatile, will struggle in Serie B as he didn’t do a great deal in Serie C so I can see him leaving too.

However, I will keep them here until targets are secured.

This is a massive summer for us – and a different challenge. It’s all very well balancing the books and becoming a well-run Serie C side with a good squad. Stepping up to a higher level trying to adopt the same approach is daunting.

Tactically, I think we are sound. We have enough young talent with potential growth to stay up, I hope – especially if we can find quality to go around it.

What does all this mean to recruitment?

GK = Daga will remain as the senior keeper and I will probably look to bring a free loan in, though I am very tempted to try and secure Baldi permanently as he is out of contract now.

RB = very happy with Marchisano as the first choice and will look for a loan backup.

LB = very happy with Bouah as the first choice and will look for a loan backup.

CBs = very happy with Anglieri and Berto, content with Filli if I can agree an extension with him and have to choose between a senior addition or a loan addition to make four options.

DM = If I can secure Grygar then I think he will be a good growth option but I think I need a more senior, top player here – or an elite talent loan, I guess.

CM = Marino and Castellano are my two most experienced players at 24 and 25. Whether they can make the step up, I am not sure. So here I think I am looking for three more players – ideally Ciuffo permanently as I think he could grow to replace either of M and C and then a choice of two free loans or one more senior player and a free loan. Probably the loans because if I take a senior player and Ciuffo displaces M and C then I have both of them out of the side and that is a waste of budget.

RW/LW = Very happy with Iannone, Ekuban and Koffi as options as I think they can all improve as well. But, I would like two more exciting loan options here.

ST = I want Presta again next season but I think that is unlikely. Also, signing untested strikers permanently is a big risk that I do not like taking, I much prefer loans on players who have contracts expiring in the next couple of seasons as I can try them first – if they don’t work out, it is likely the Serie A manager will be asking questions and I can play it so that they terminate the loan. This is probably the only position I am prepared to pay a loan fee on – and then that would only be on Presta, I think. So, two players needed here as I don’t think Ekuban or Iannone could be considered good enough to start the season as our #9. 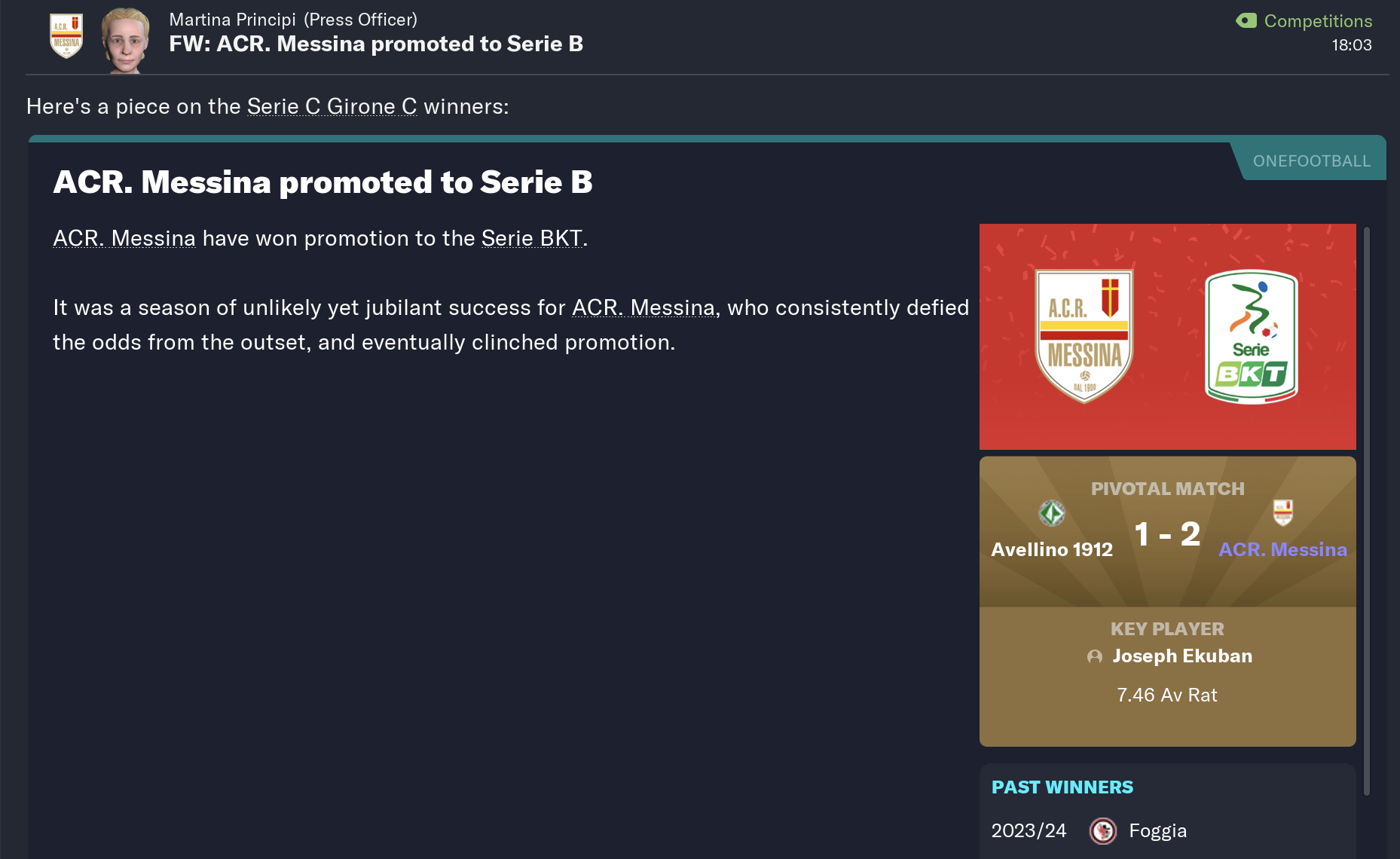