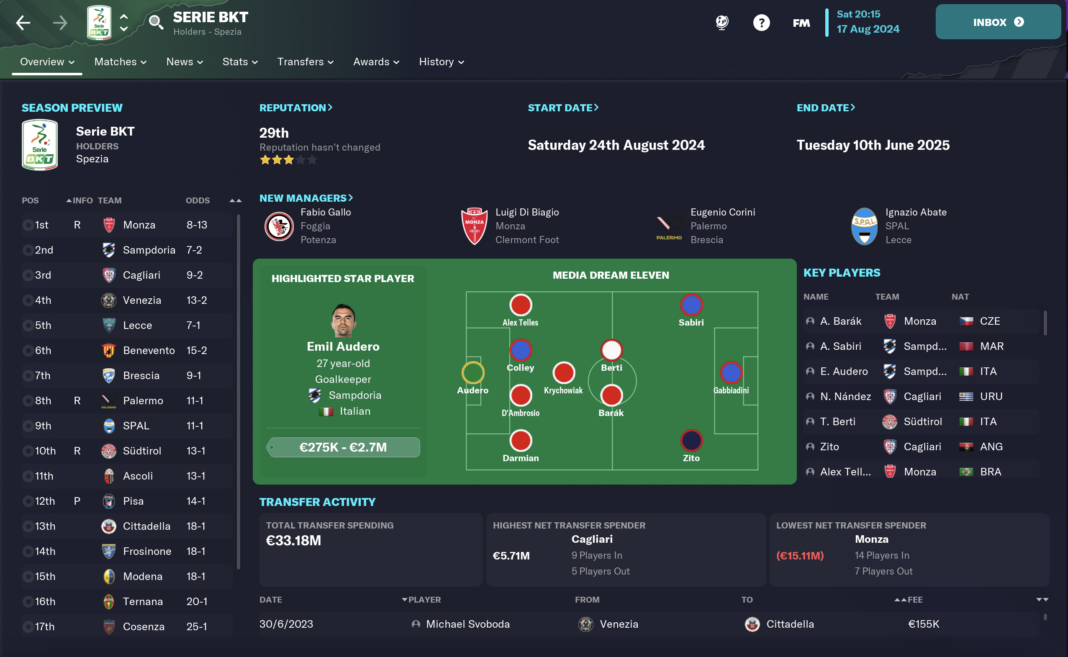 Quite a quick return to writing for Part V as the close season flew by in Messina.

As I write, we have just played two early rounds of the Coppa Italia which is the first opportunity the new squad have had to show me what they can do.

But, for personal motivation, just putting this here…

The odds have come in, we were 300-1 before the Coppa Italia matches.

In the previous post, I was looking to recruit the following;

In summary, it was going to be a busy loan market for me again.

Busy, yes – successful? I think so.

The biggest change in loan approach this time around was accepting that I would need to spend some wages if I was to get that little bit extra quality. But given that I had €8,000 left in the RWB(f) and was only likely to bring in loans from here, that was not going to be a major issue.

And so it wasn’t – I ended up bringing in 12 loan signings for a total weekly wage commitment of €1,040.

Presta, 20+ goals last season, is with us again which is fantastic – and he is costing me nothing, plus he is out of contract at the end of the season and I cannot see Fiorentina retaining him so I am planning to pay whatever is needed to get him.

Our massive Swede, Eybi Njie, also returned for nothing and will be a first choice on the wing if everything goes to plan.

So, who we signed and from where…

That’s quite a group.

On permanent contracts, Ciuffo agreed a deal with us – €550 per week. I also resigned Mallamo (possibly a mistake as he won’t play and now I cannot shift him out on loan) for €400 per week – why? The coaches said he was potentially Serie B level.

I also signed for €425 a week a Belgian released by Genoa – Theo Cenci. I’m quite excited by him, he might actually have resale value as he is on a three-year deal.

Of course, none of this really matters if we get battered each week in Serie B and get relegated – but early signs are interesting.

We played Cozensa, Pisa, Lecce and Benevento in preseason (yes, I know, friendlies) but we beat all of them – with a mix of what I consider to be starters and backup players.

In the Coppa Italia, we drew Como (again) in the Prelim round and won 4-1.

Then, we went to Serie A Spezia.

They led after 6 minutes and I thought we were about to get taught a bit of a lesson. I felt that even more after Presta got two yellows in the first 29 minutes. Not knowing what to do at all, we played with no central striker and left the two others wide and I moved the RPM from the DM slot into the middle of a flat three and hoped we wouldn’t get done for five or six.

Iannone equalised just after half time.

It went to extra time.

Our left back, Bouah, scores a worldy in the 98th minute and somehow, we hang on.

We now have a week off before the league season starts with a trip to Sampdoria – then we welcome Cagliari. We’ll know a lot more after that, I am sure.

But – Keramitsis is already clearly a standout starter at the back for us, which is great. Obleac, an 18-year-old Moldovan international immediately looks capable of stepping in when needed. Ali Dembele could well push Marchisano for the right-back slot as he is a year older and a lot more physically developed. Our loan left-back, Prev, was on the list of potential Serie B golden boys for the season – so I should give him some games.

In midfield, 20-year-old Zambian international Chiwisa looks like our roaming playmaker straight away and it is likely I’ll drop Castellano in there when needed as I cannot see him getting a starting spot in the midfield two. In the two cup games, Marino looks out of his depth so I suspect Cenci (scored against Como off the bench) will overtake him quickly and the 18-year-old Slovak U21 international Parilla seems to be locking down the box-to-box role already. Ciuffo is the next taxi in the rank, then probably Coulibaly and Milicevic provide cover.

Out wide, I don’t feel I have upgraded at all but, equally, I feel like what I have will be good enough. And then in attack, Presta (despite his red versus Spezia) scored two crackers against Como and looks like he is ready to do it again in Serie B. I also think Enem is an excellent recruit as a backup.

All in all, I think we should stay up – and I think we might actually do OK too. Yes, it is a very young squad but almost all of them have played international football (youth and senior in some cases) and there is talent there for sure.

The next task for me is to work out the RWB(a) based on some final financial figures, but given how far off we are from the forecasted real wage budget, it is more to tick a box than to squeeze any more out of the numbers.