In recent years, there has been a lot of talk and, in fact, debate about Trent Alexander-Arnold’s defensive ability. Personally, I find the idea that he “can’t defend” to be ludicrous and that a lot of the limelight that comes with this issue is only because he’s a Liverpool player – a lot of the stick aimed at him online seems to come from fans of Liverpool’s rivals -or fans that just hate Liverpool! I am, however, under no illusion about his true defensive ability – he isn’t bad at defending, but he isn’t perfect either.

We are all aware that Trent’s greatest talent lies within creativity. He is one of the best passers in the world, and this has led to calls from fans for him to play in a midfield role, both for Liverpool and England. So, I am going to do what Jürgen Klopp or Gareth Southgate haven’t done (yet), and fully transform TAA into a central midfielder! In part one, I will talk through how he should fit the role as a midfielder – and which role(s) he could undertake. We will also be briefly looking at the plan in place in regards to the right wing-back slot so I will be equipped for a future where TAA plays in midfield.

Stats overview – does he fit the bill?

In this save, I am currently running an unorthodox 3-4-3 system with one deep-lying playmaker in the defensive midfield position and an attacking midfielder in front, as shown below. 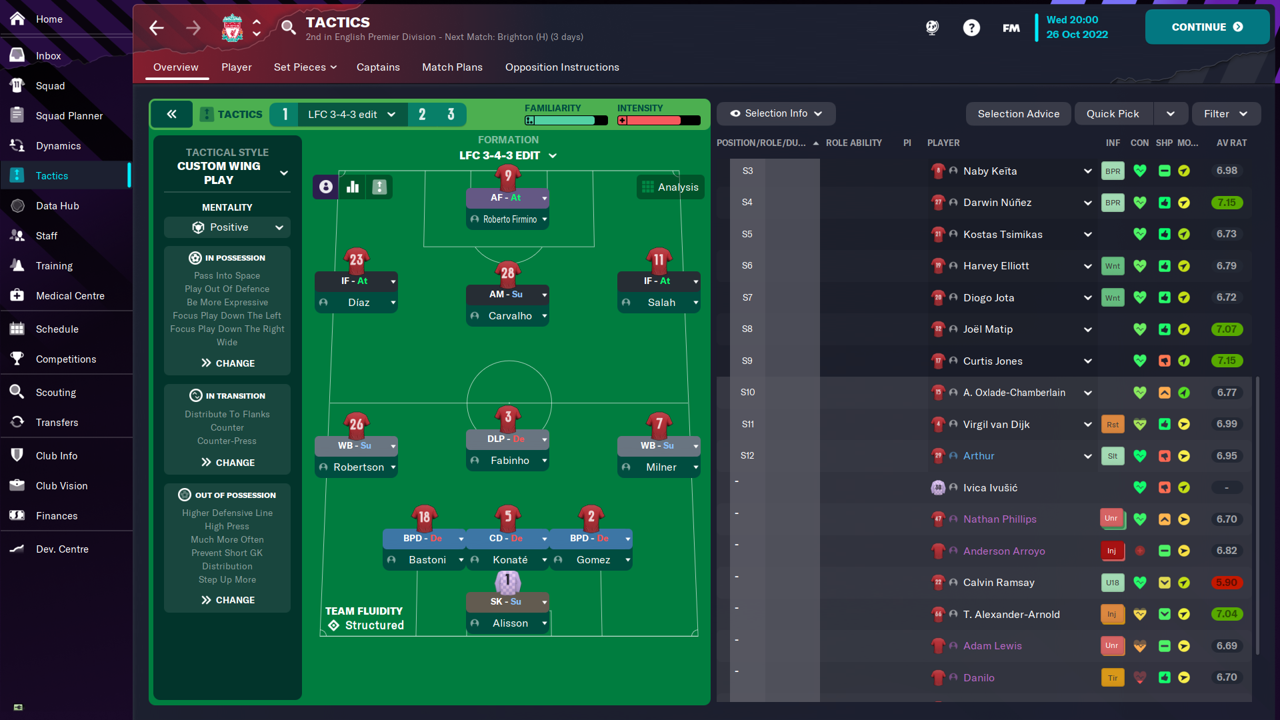 In terms of his attributes, he looks like an ideal fit. The image above highlights the attributes needed for a central midfielder – there was no such comparison for the CAM role as he isn’t well acquainted with the role yet. Key areas such as passing, technique, first touch, and vision equip him well for a creative role in midfield, while he may need to improve his dribbling and finishing to become more effective in this kind of role.

Already, I can tell that this venture is going to require a good deal of patience and trial & error in terms of training to a specific role/position. The thinking behind aiming to retrain him as a CAM is simply that he is already listed as “competent” in central midfield and ranks nicely next to my existing midfield options.

Currently, my primary option for this role is Thiago, so I’m not exactly in a rush to get TAA ready to play there. Thiago also acts as a nice benchmark in terms of attribute comparison, as he possesses a brilliant skill set for a creative midfielder. 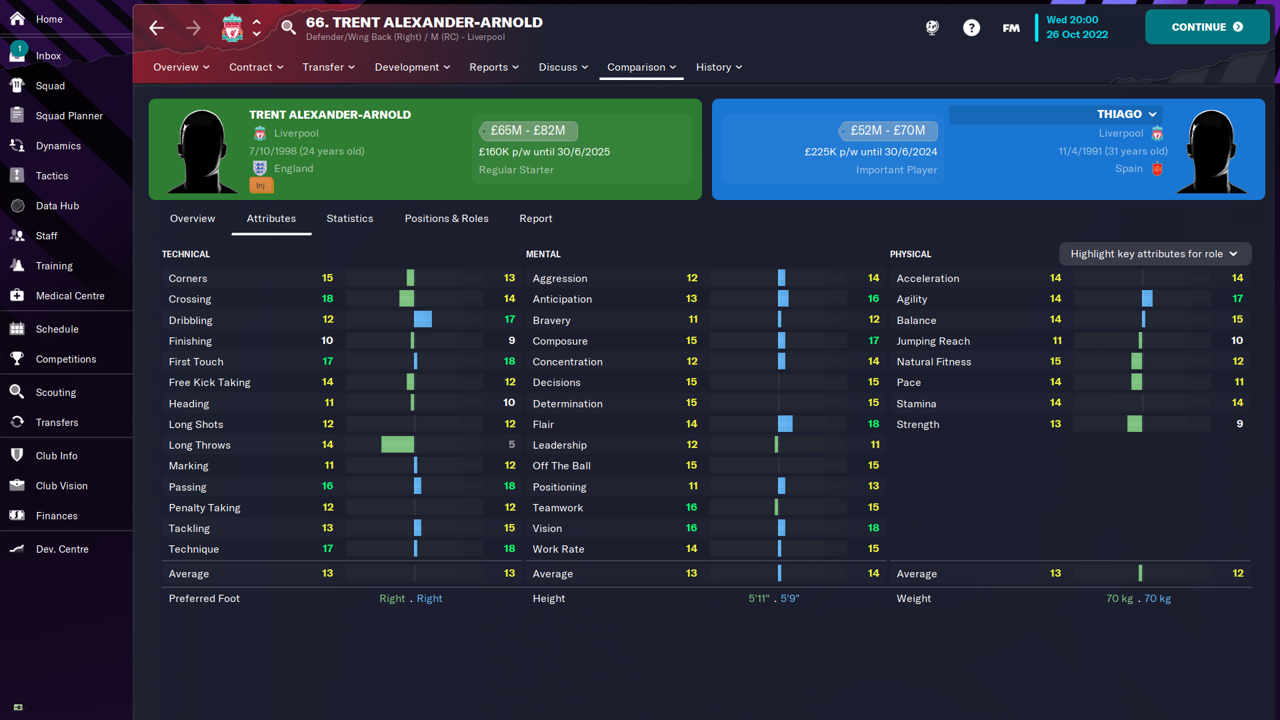 Comparing Trent to Thiago gives me a good idea of what we’re working with at the moment. While TAA does have higher attributes than Thiago in some areas, none of them are really relevant to the attacking midfielder role, but this does not concern me as Thiago is an exceptional talent, and finding a player with attributes like this on the market will cost a pretty penny for sure. Furthermore, as we mentioned previously, TAA’s attributes in terms of passing, technique, etc., are still very pleasing.

Which brings me to my only real gripe about this mission. Trent Alexander Arnold’s presence in the rwb role so far in my save has been phenomenal. He has nine assists in 14 games! And when you look at his crossing attribute of 18, there is the worry that I lose that dangerous presence in the rwb role, so I have work to do in terms of finding a replacement. However, this work started a while back as I identified some potential newcomers for the rwb role, and you can find out about them here!

Training – how do we achieve this?

In FM, I used to let my assistant manager absolutely everything on the training ground. This year, I have slowly started to take over in certain parts. While I still let them create the general training schedule for the squad, I add sessions myself based on upcoming opponents, which you can read about here. I have also taken the reigns for all individual training… 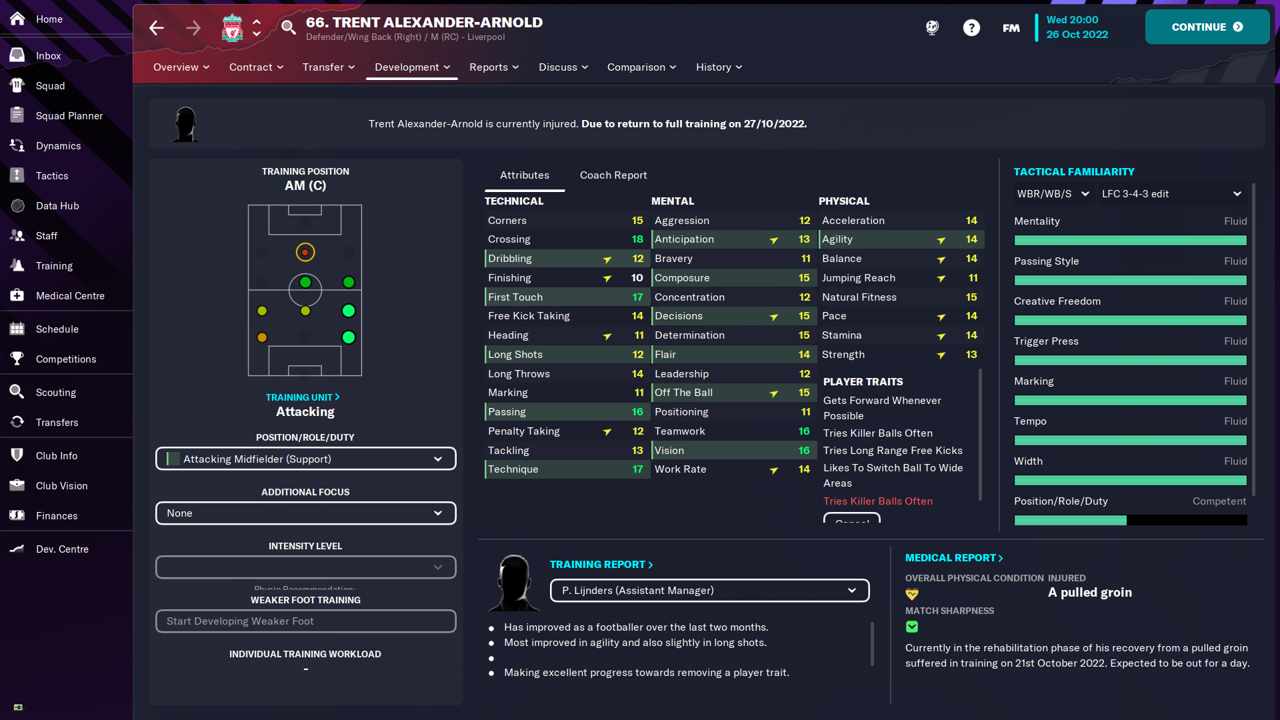 I know managing the training side of things is daunting for a lot of FM players, but handling individual training is essential. I’m not talking about player traits or things like that, but the actual position they’re training as.

Above, you can see Alexander-Arnold’s training over, and we’ll dive into that in a moment. But back to the general training tip: each player in your squad has a positional focus in training, and these are usually quite generic. For example, all of your defending midfielders may be set to train purely as a defensive midfielder. Take my team, for example, the one we saw earlier in this article. Fabinho plays as a deep-lying playmaker, so in his training schedule, that is the position he trains. It sounds like a simple tip, and it is, but it can go unnoticed if you ignore the training side of the game.

Anyway, back to the matter at hand. I’m training TAA as an attacking midfielder for now, as it matches the role in my formation. The highlighted stats indicate to me that there is huge potential in achieving this, but he needs time to get used to playing in that role – both in training and in games. As touched upon, I will alter his training regime as I see fit. If I adjust my tactical shape in midfield as I mentioned, TAA’s training will reflect that. I also intend to keep an eye on individual traits that could be worked on or introduced.

Quite honestly, I have no idea how this is going to pan out, but it could be an exciting quest and one that could have a massive payoff if Trent turns out to be a natural as an attacking midfielder. Tune back in in a couple of weeks’ time for the update!

In part one of this venture, I talked about my desire and intentions in regards to deploying Trent Alexander-Arnold as a central midfielder. If...
Read more
Football Manager 2023 Saves