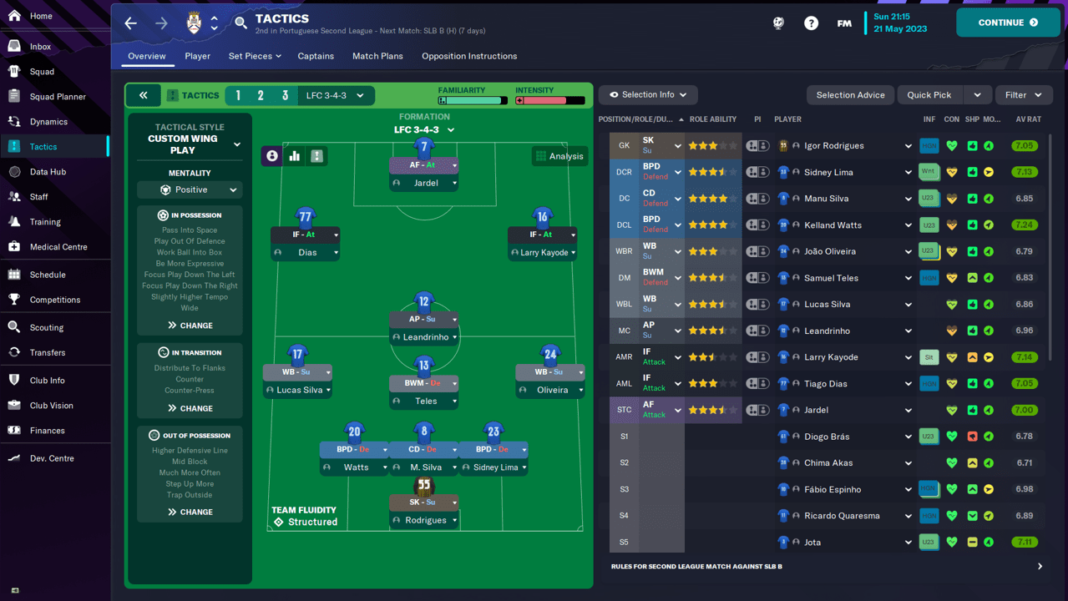 There are a multitude of challenges and game directions to undertake in the world of Football Manager, and if you’re anything like me, you’ll be fond of one challenge in particular – taking a team and turning them into European giants. This year in FM23, I took control of C.D. Feirense to try and achieve this. I joined them in Portugal’s second division, with the club at something of a standstill. At the time of writing, I have just completed my first season and it was an overwhelmingly successful one. My aim, over a number of seasons, will be to turn Feirense into a dominant force in Portugal before taking over in Europe. In this article, I will discuss that success, along with the tactics I used, before looking ahead to next season.

The club had their own ideas of what success would’ve looked like in the first season, and they would have been satisfied if I finished mid-table and was “competitive” in both cup competitions. Interestingly, one of their preferences in line with their club vision was to sign Nigerian players – it certainly impacted recruitment at the start of the season. 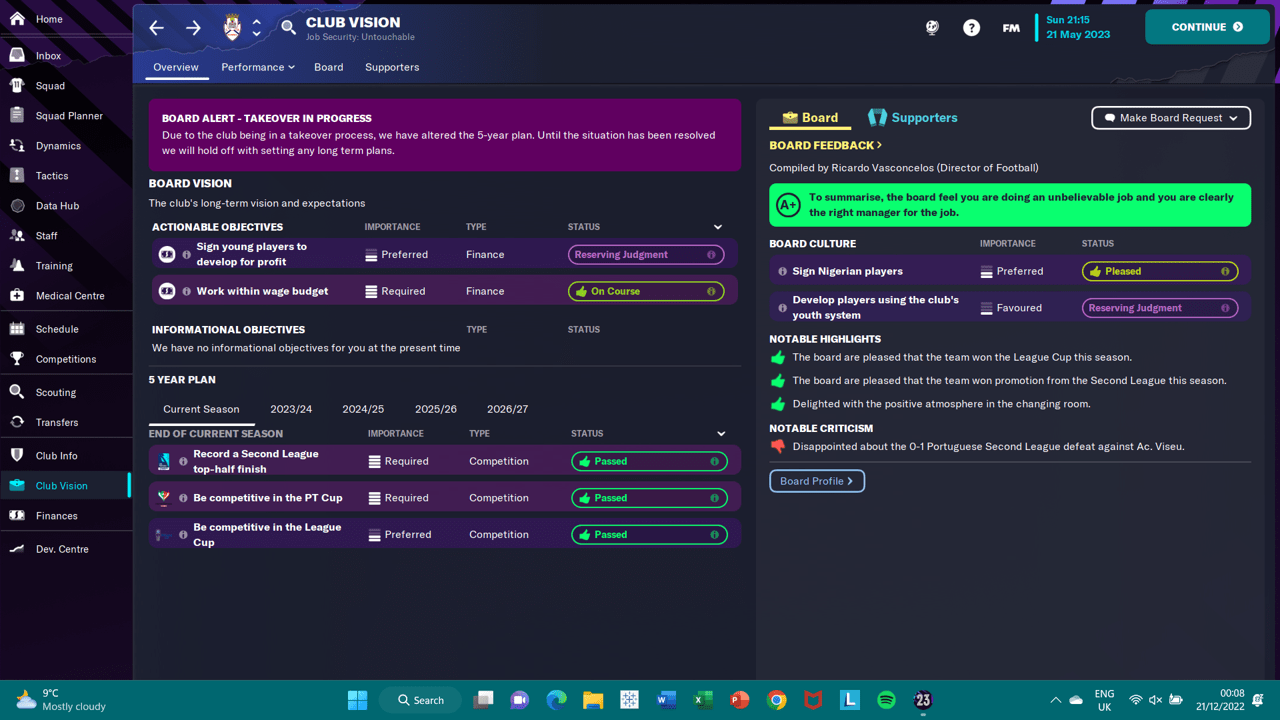 A few things worth noting from that screenshot. Focusing first on the season objectives at the bottom of the screen, you can see the board didn’t expect fireworks, looking only for a mid-table finish. Now, if you haven’t already, turn your attention to “notable highlights” comments on the right of the screen – you’ll notice that we won the Portuguese League Cup and gained promotion to the top flight. Not bad for a first season, eh?

But how did we achieve such monumental success? Well, while our defence wasn’t exactly leaky, it was our attacking dominance that was our biggest asset. In the league, from 34 games, we scored 62 goals and shipped 31. Our goalscoring record saw us finish as the highest scorers in the division, which is a credit to the overall quality of the squad, but also the tactical set-up, in a season where we finished second behind Benfica’s B team. It can be argued that we have massively overachieved, especially when we had the 7th highest wage bill

So far in FM23, my effort has been devoted to mastering my 3-4-3 creation, which you can read about here. Of course, the tactic has gone through a few tweaks here and there depending on which save I’m using it in, and who my next opponent is. But behold, – the tactic that saw us achieve major success: 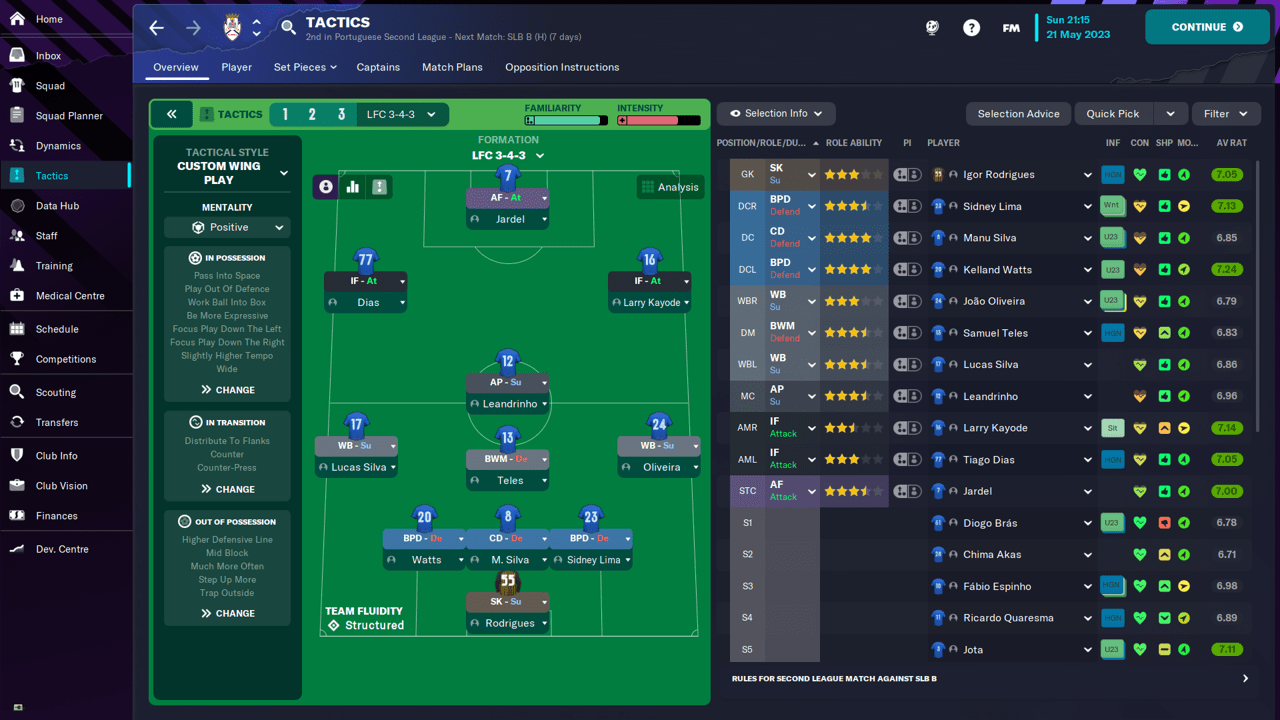 As you can see, we had a good level of quality in the squad, with the vast majority of players performing at a good level on a consistent basis. The system allowed for a number of players to do well in the goalscoring charts, with multiple players bagging 8+ goals in the league. Originally, I had Leandrinho playing higher up, as an attacking midfielder, but our form improved significantly when I dropped him slightly deeper.

Attacking the flanks and getting crosses into the box was key for our tactics, so it was important to have wide players with good attributes that suited this – likewise for the strikers in the middle. It seemed to work a treat, as we smashed the charts for crossing in the league. 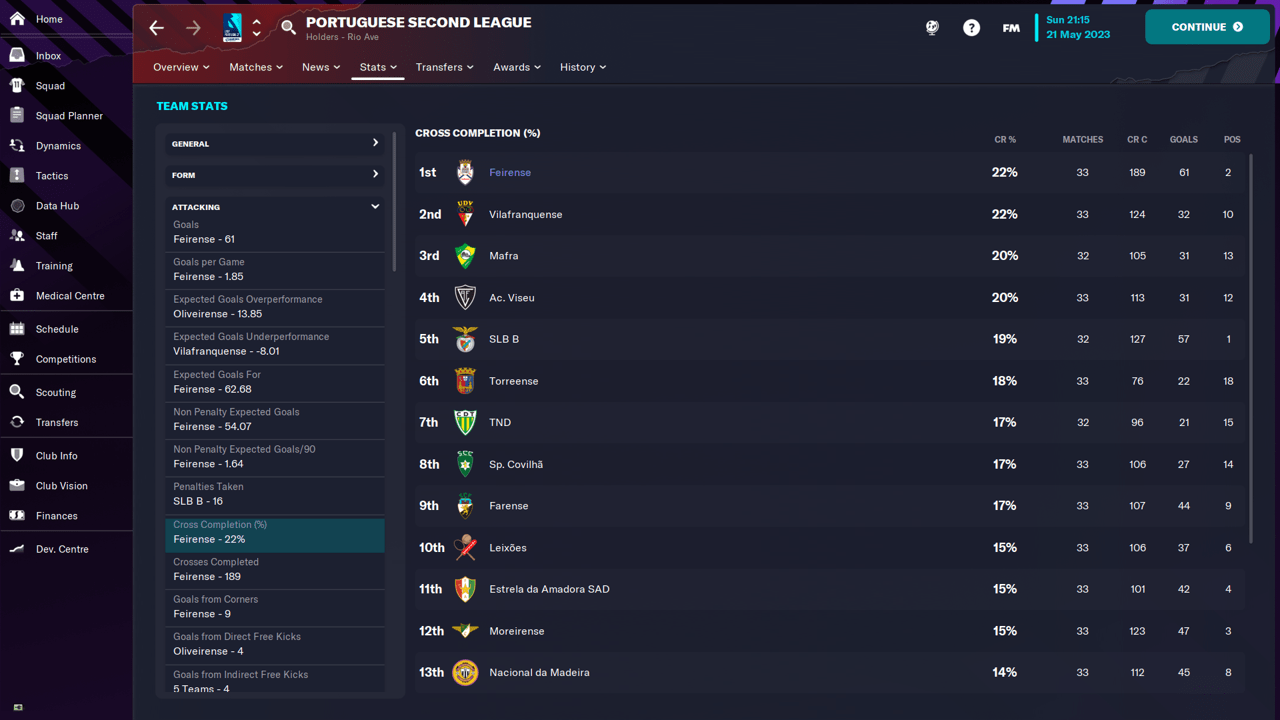 We topped the chart with a cross competition of 22%, but this becomes even more impressive when you see our tally for crosses completed, as it is considerably higher than that of the team who matched our 22%. You don’t even need giants in attack to be dangerous from crosses – I find well-rounded forwards who have decent attacking ability and are around the 6-foot mark seem to do the trick. Alongside this, in the team instructions, set the crossing to mixed crosses. 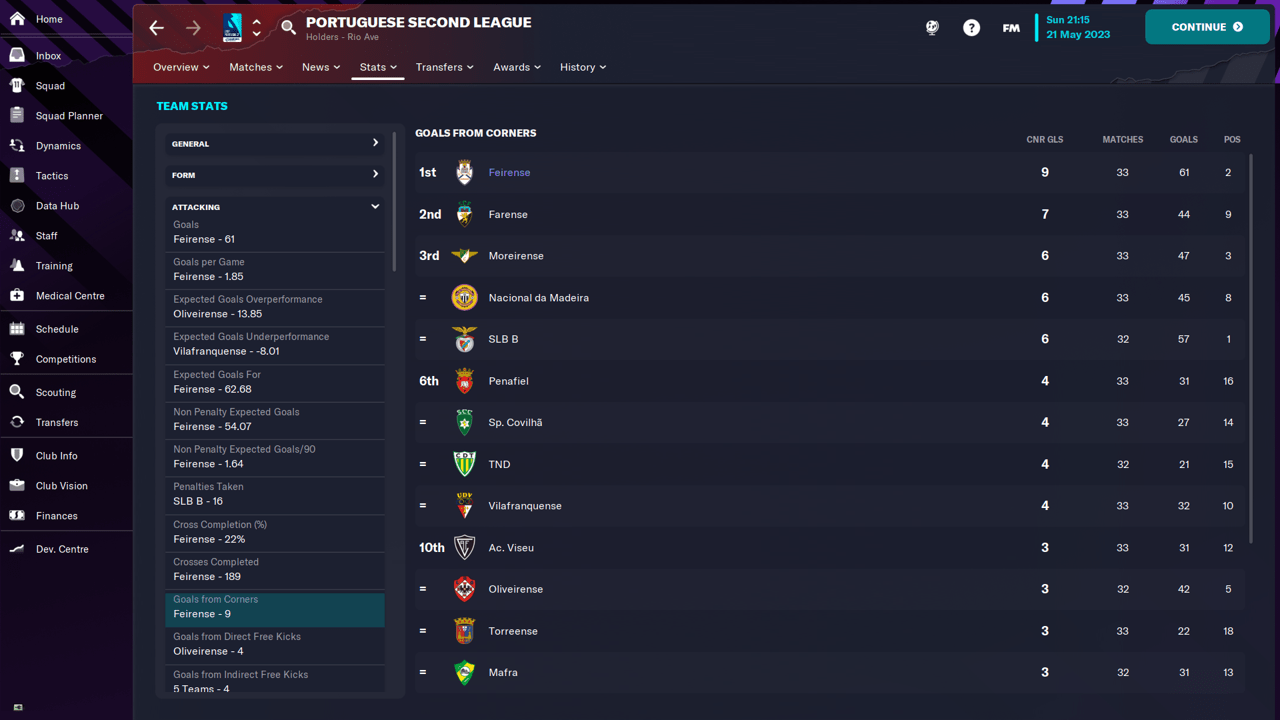 We performed okay in other set-piece areas, but attacking from corners was a huge strength of ours. Nine goals from corners highlighted the individual talent involved, along with our set-piece set up, which you can read about here. Our focus on wing-play also helped us win more corners, giving us more chances to bag goals from set-pieces.

After confirming promotion to the top flight, my attention turned to strengthening the squad and got to work immediately. We already had a couple of players ready to join on pre-contract deals, but I was aware of the importance of squad depth – I had no intention or need to make wholesale changes to the spine of the team, just a few tweaks and additions here and there. I have made five first-team signings at the time of the writing, and that number is unlikely to change – I feel my team is ready for the new season. 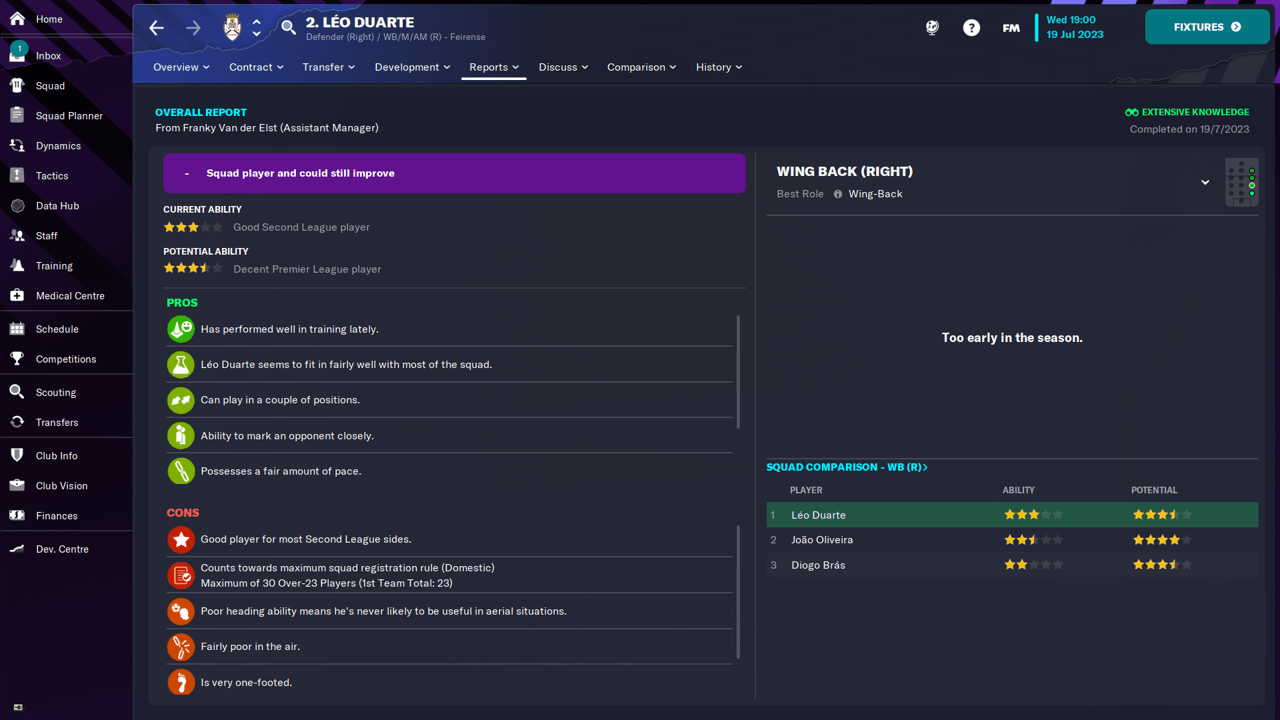 While both of my wing-backs performed fairly well in the second tier, I had to find a solution to improve our defensive record. Yes, we didn’t concede a large number of goals, but we must look to improve as we will be facing much better teams. I narrowed my focus on improving the wing-backs months prior to the end of the first season and signed two players on pre-contract deals. The first, to play on the right, is Leo Duarte, who offers a similar style to Joao Oliveira, but with slightly better quality. 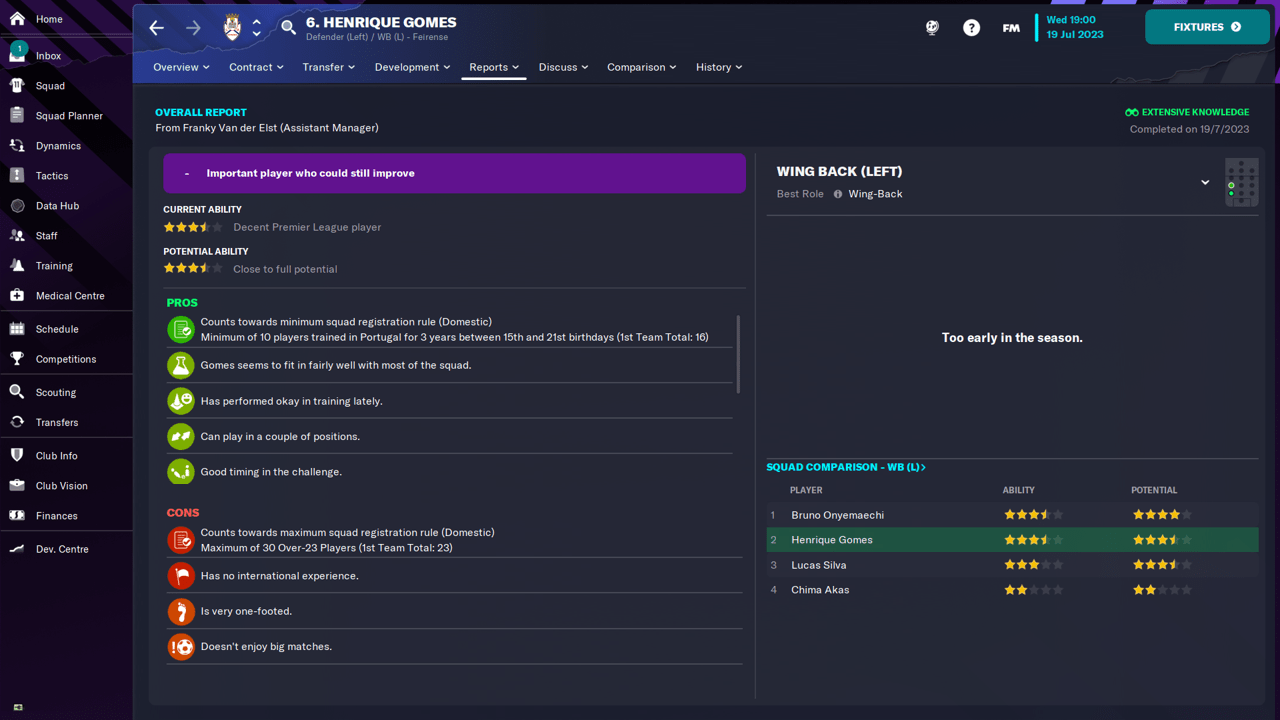 On the left, the player we agreed on a pre-contract deal with is Henrique Gomes, a player entering his prime years at the age of 27. He adds some much-needed quality and competition at the left-wing back spot, which was also aided by the return of Bruno Onyemaechi. Bruno, to my frustration, spent the entire first season out on loan, despite being our best left-back. Depth at both wing-back positions will prove to be a vital factor in any success we have in the Primeira Liga. 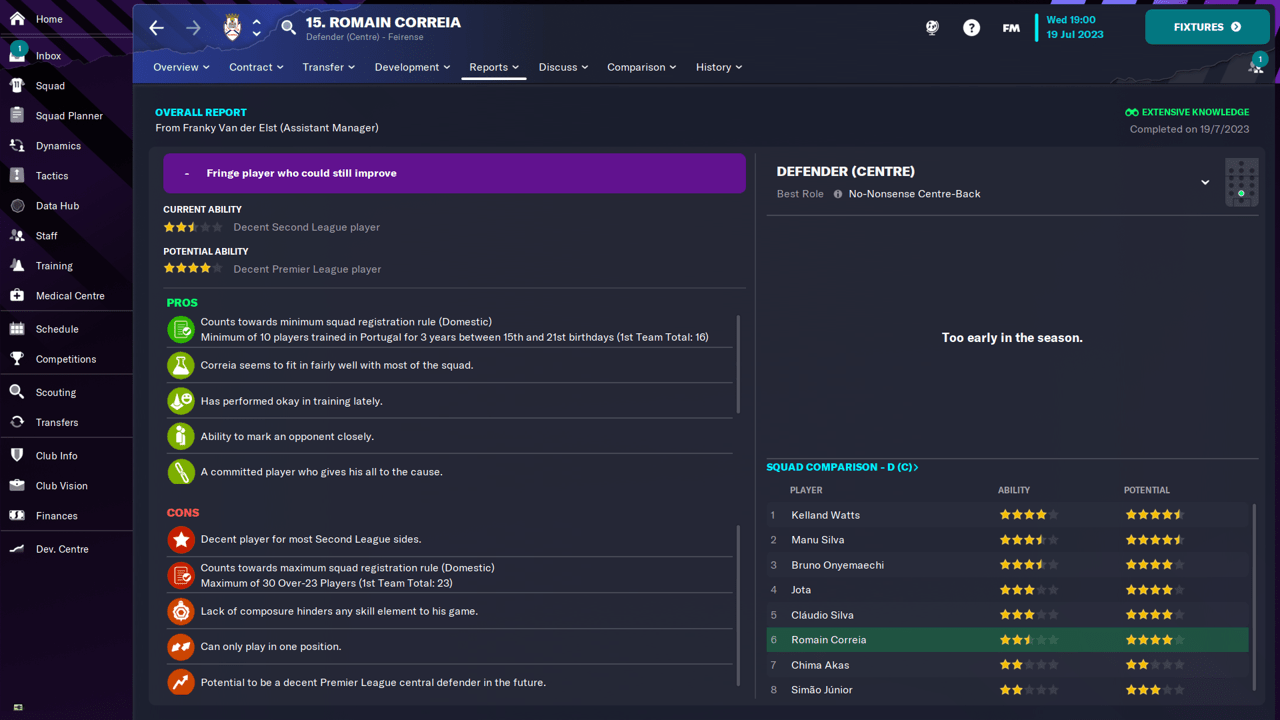 The third and final defender I have signed is something of a project player for future years. Romain Correia arrives from Porto B for just £26k and adds some depth to the ranks at CB. His potential ability also bodes well, and he could be a vital player for the club in years to come. This signing was made with the aim to bolster depth in this position after the departure of one of my first-choice centre-half, Sidney Lima, who left at the end of his contract – annoyingly, he had no interest in staying. 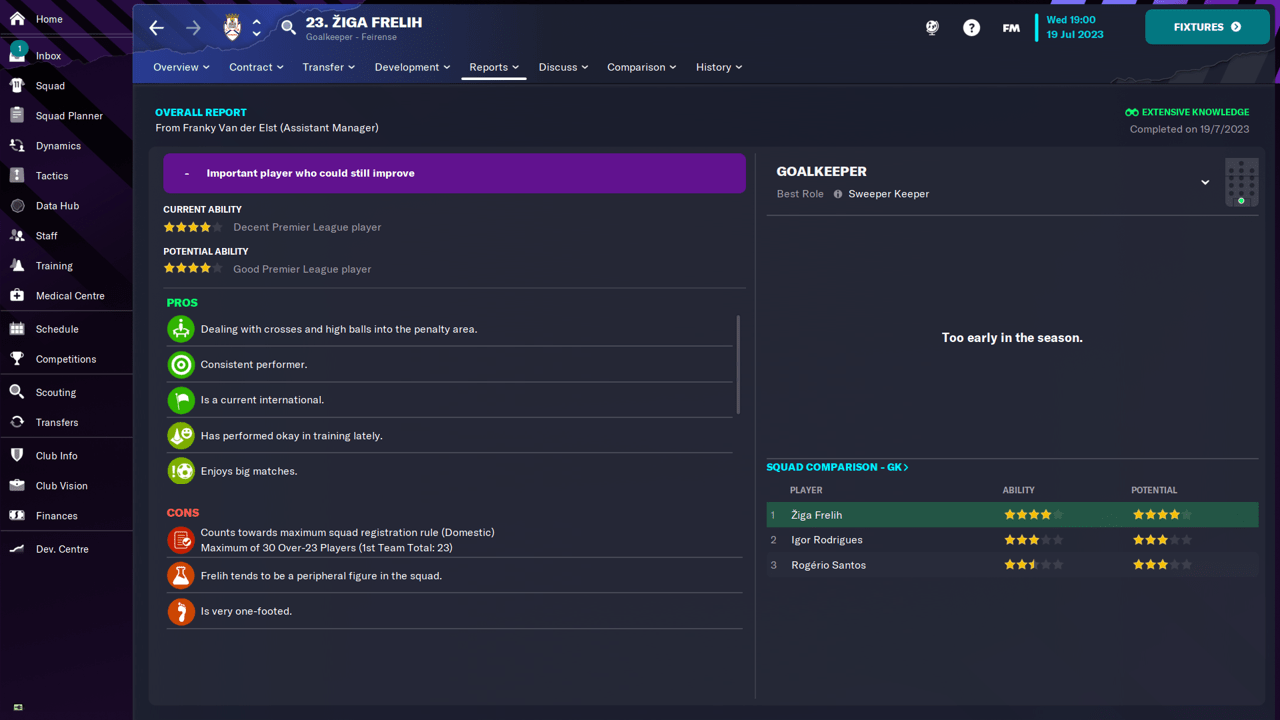 At no point in the 2022/23 season did I highlight the need to bring in a better goalkeeper, and that intention remained dormant until my scouts found this gem, who I quickly signed on a free contract. Ziga Frelih is considerably better than my previous first-choice Igor Rodrigues, and could be a vital part in us consolidating in the top-flight. I have high expectations of him, however, as he is earning a lucrative £4.1k per week, making him our biggest earner by far. 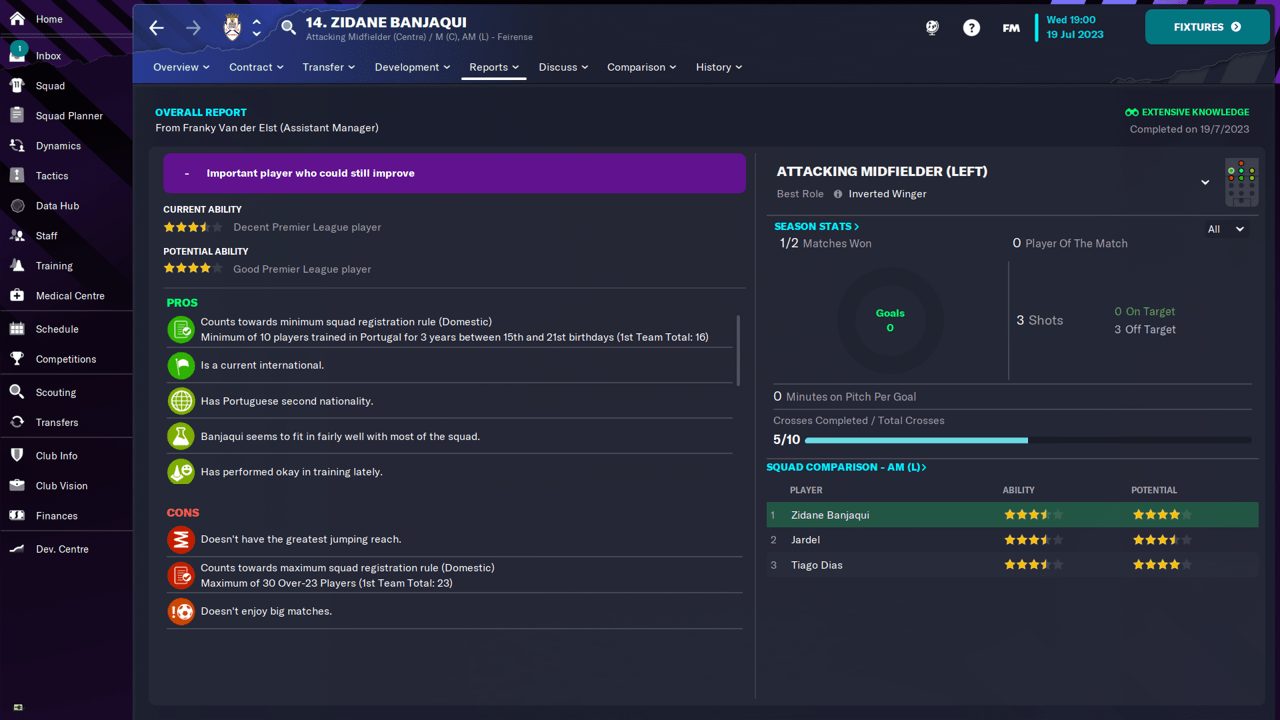 I won’t lie, the fact that this player is called Zidane was a major selling point in bringing him to the club. My scouts first brought him to my attention around March of 2023, and the initial signs were promising, so I set out on scouting him further in the hopes that he was indeed the talented player I thought. As it turns out, he was! So, I splashed out £350k on him, which is a lot for us! I have faith that he repays that fee quickly, though, after he scored four goals and got 6 assists in 22/23, for a team who finished 14th, just three spots above the drop zone. My thinking was, if he can perform well for a struggling team with little talent around him, he will thrive in a team whose tactics focus on intense attacking, surrounded by quality players. He offers versatility too as he can play on the left, on the right, or through the middle.

And there we have it – we are as prepared as I think we can be for life in the top division. There are going to be some grueling fixtures but I am confident of avoiding relegation, and even going on a decent cup run as well. We’ve all had the disappointment of new signings not living up to expectations, so I will be watching closely so that my new boys don’t follow that trend. If we can navigate the first season in Primeira Liga nicely, we will be well on our way to Portuguese dominance and a Champions League takeover.

In part one of this venture, I talked about my desire and intentions in regards to deploying Trent Alexander-Arnold as a central midfielder. If...
Read more
Football Manager 2023 Saves