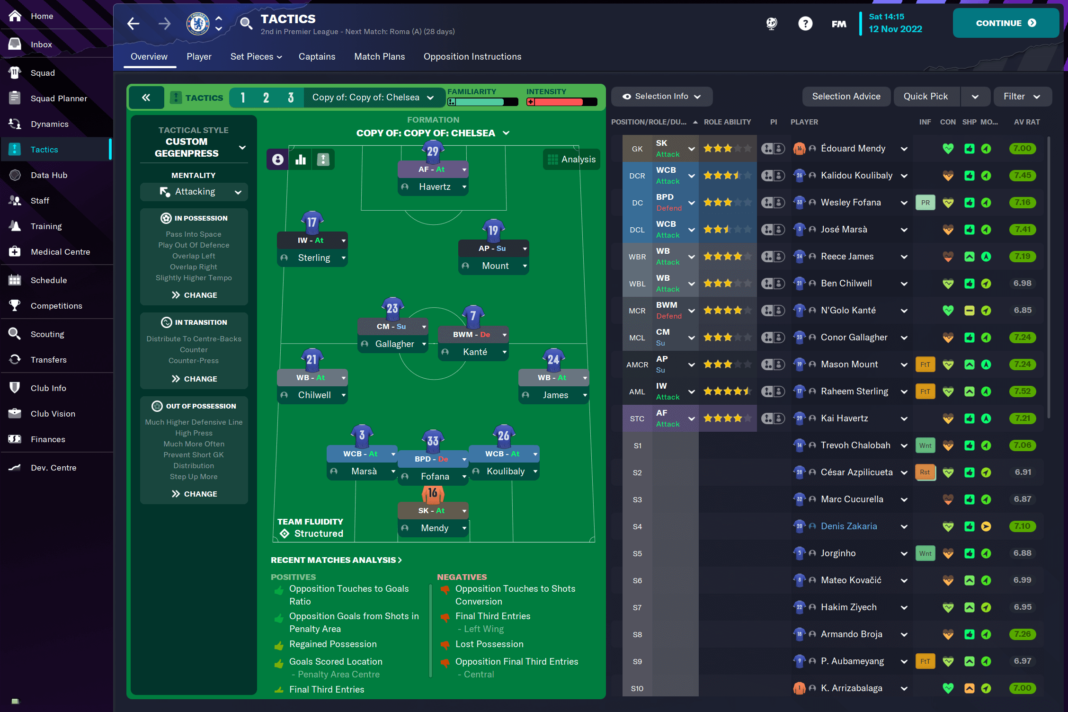 This piece originally featured on our sister site, chelseafcanalysis.com

In the first article of my Chelsea save in Football Manager 2023, we covered the first preseason with the Blues. After some turbulent years at Stamford Bridge, it is time to guide Chelsea back to the elite of world football. Aiming for consistent success on all fronts, the road to the ultimate top will not be an easy one. In the preseason article, we laid out our tactical plans, went over our transfer business, and looked at how the team was performing.

As we reach the World Cup break, the first half of the season has been eventful, to say the least.  Things have been far from easy at Stamford Bridge, with constant little tweaks needing to be made here and there. From tactics to team selection, finding consistency in both our results and performances has been difficult. Nonetheless, with great resilience, we reached the break doing well in all competitions. With a couple of weeks to regroup and plan the second half of the season, it is time to look back on these past few months.

We will first go over all the basics – our results, standings, and overall path so far. Once the context is all laid out, we will go through our complex tactical development, looking at the many changes to the structure and team selection we have made. Finally, through a data hub-led statistical analysis, we will examine the team’s performances and playing style.

Life until the World Cup

As we mentioned, life has been far from simple at Stamford Bridge. Finding consistency in our results and performances has been extremely difficult, mostly due to our relentless schedule and medical department. Injuries have unfortunately played a significant role in this first half of the season, with many key players being out for weeks at a time.

In the image below, we can see a brief summary of our season so far, injury-wise. We have only been in action since August, a total of three months and a half. Hakim Ziyech was the main absence, with the Moroccan being out for the majority of the season so far. Kepa Arrizabalaga, our backup and cup goalkeeper, has been another significant absence. N’Golo Kanté, Mateo Kovačić, and Kai Havertz have also missed multiple weeks of actions, leaving us short-handed in a few important matches. Édouard Mendy, Thiago Silva, Reece James, and Pierre-Emerick Aubameyang have also missed a further two weeks each. 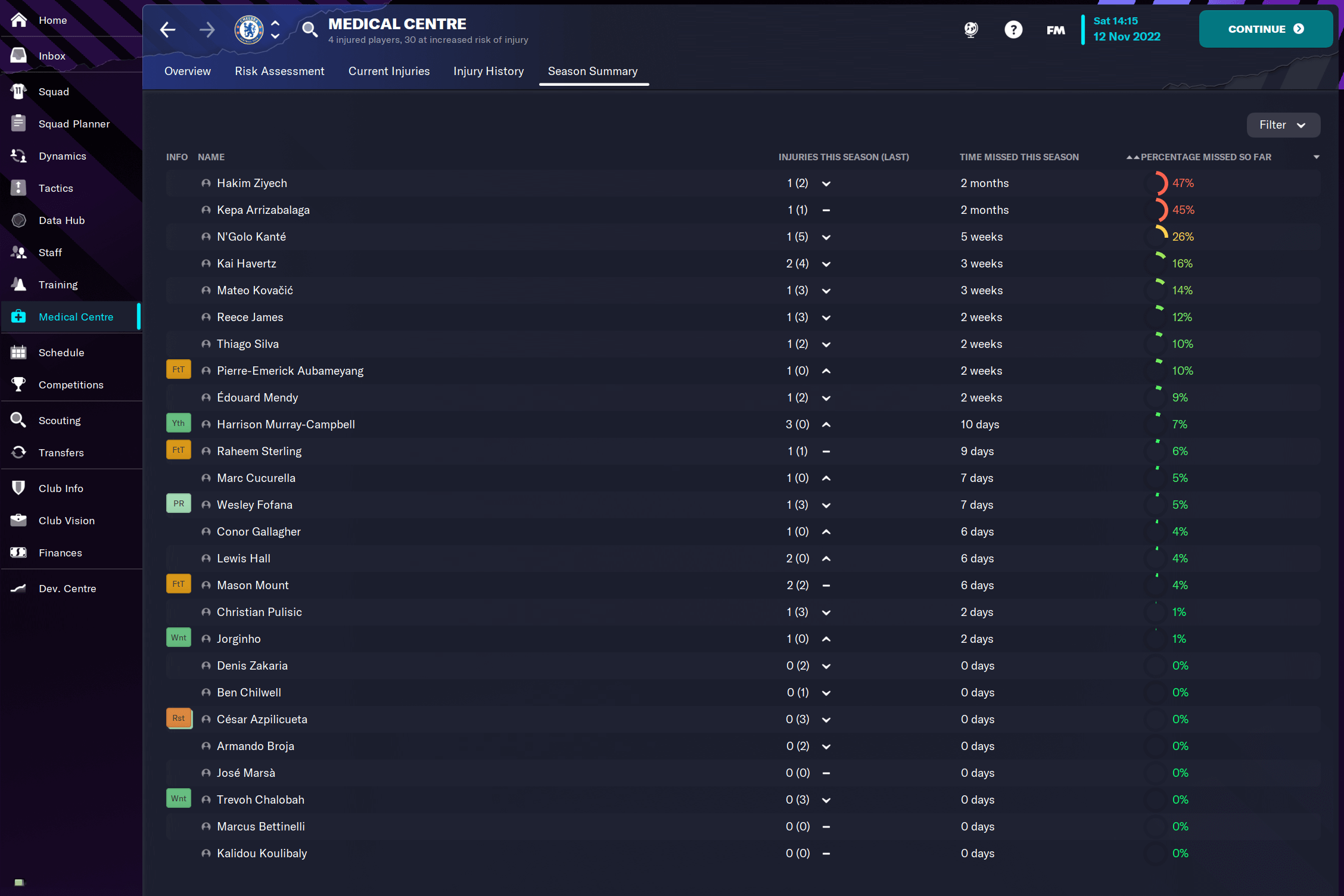 The injury list has been extensive in these four months, and it is no wonder we have struggled to find consistency. Our season got off to an exciting start, with four straight wins. However, the occasional losses started coming. In the following seven, we lost three matches which really frustrated me. The busy month of October began shortly after, and our inconsistency continued. Playing the likes of Man City, Liverpool, Arsenal, and Porto, our schedule was far from easy. However, after the Liverpool loss, we have gone on a seven-match unbeaten run, only dropping points to Brentford away.

This inconsistency in our results really bothered me, and as we will see later, I was constantly making tweaks to adjust our structure and tactics. Team selection has also been frustrating. Some players have not been able to perform well, while others have been out injured. 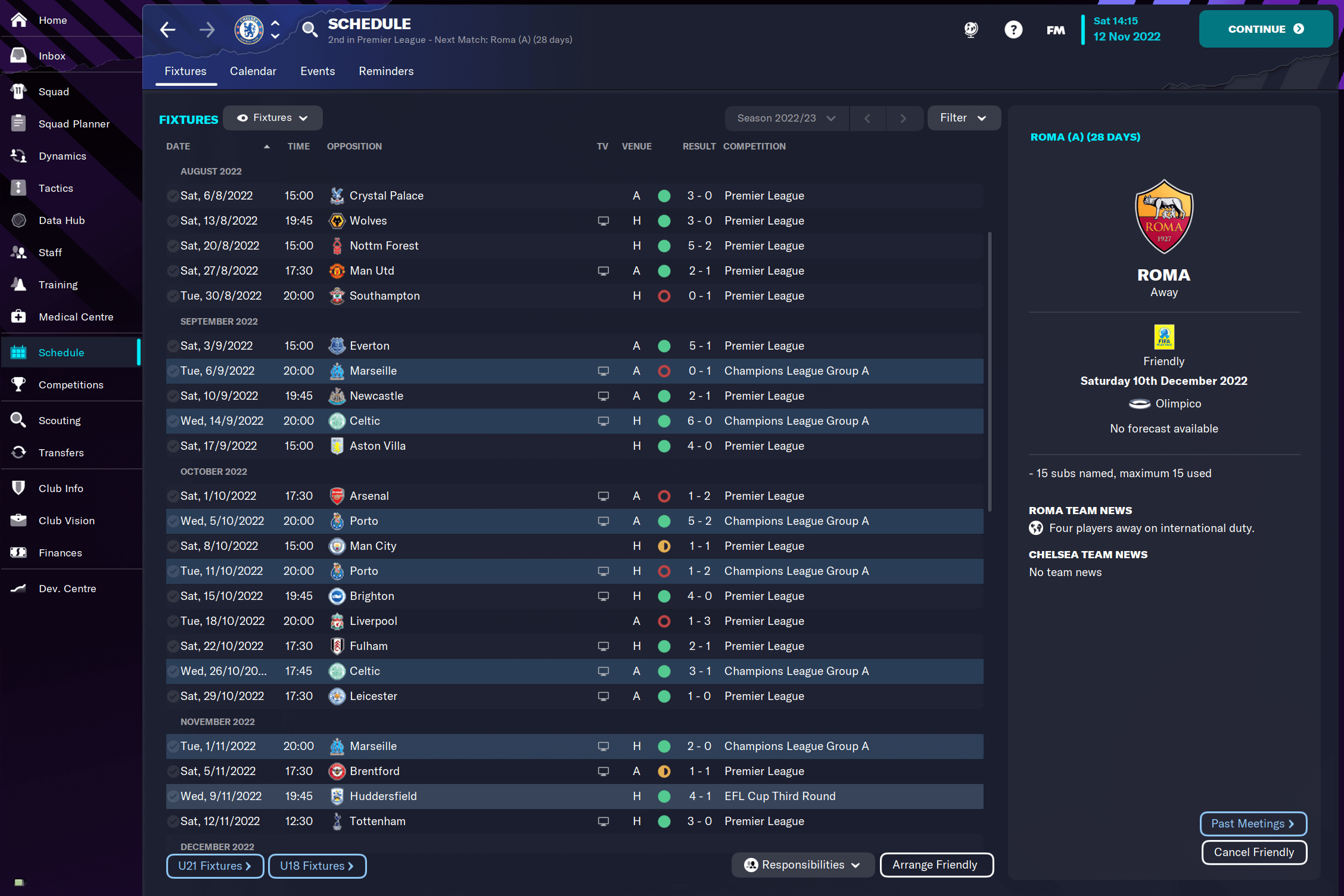 While our results have been mixed, we have been able to continue strong in all competitions. In the Premier League, we sit in second place only two points behind Liverpool. We will certainly not be able to compete with Man City and Liverpool for the title but attempting to keep up with them will see us qualify for the UEFA Champions League with some comfort.

In Europe, although we lost two games, we were able to take care of business in the other matches. We qualified for the knockout round in first place, but that didn’t seem to do us any good. In the draw, we got none other than Real Madrid. Los Blancos somehow finished second in their group, and we will now be going to Spain hoping to stay alive in the UCL. 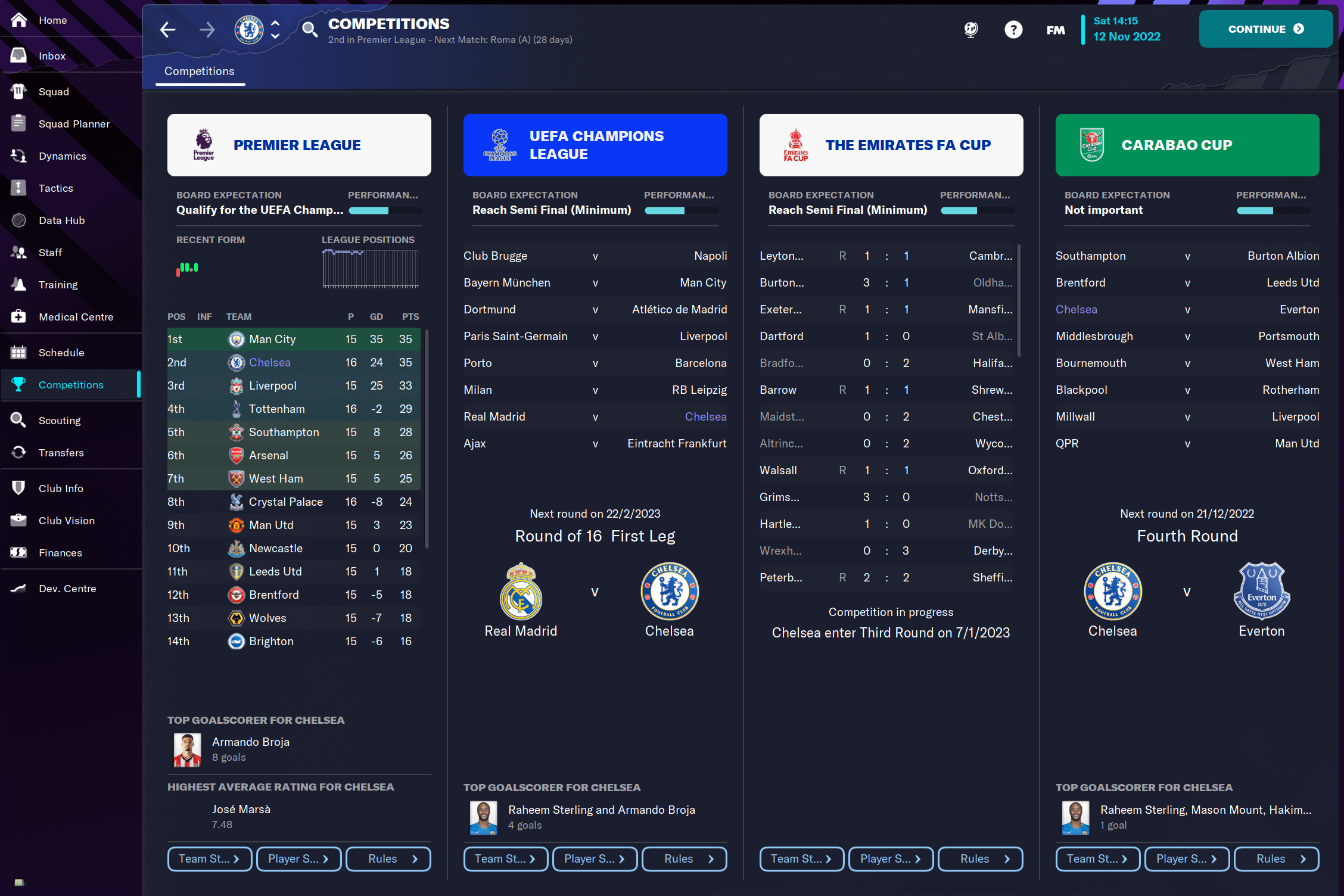 Despite a turbulent first half of the season, we remain extremely strong on all ends. This first season is crucial in finding initial success and laying out the foundations for our project with the Blues. It hasn’t been easy, but we are looking quite good at the moment. It is now time to take a peek behind the scenes though and examine what we have really been playing like.

At the end of the preseason, we settled upon three different formations. The objective was to use the 3-4-3 as our main structure and have the 3-5-2 and 4-3-3 as options depending on opposition, scenario, and availability. In the last match of the preseason, however, Ziyech suffered a serious injury which saw him out for the next few months. This set off a chain reaction as we had no set structure anymore. The season kicked off, and we were desperately searching for our best XI and structure to go along with it.

In the first 29 matches of the season, as seen below, we used a total of five different formations. The 3-5-2 with an inverted triangle in the midfield was our go-to formation, being used 36% of the time. Another 27% of the time, we used a slight variation of the 3-4-3, which we will examine shortly. A regular 3-4-3 was used another 20%, and back four structures made an appearance 14% of the time. 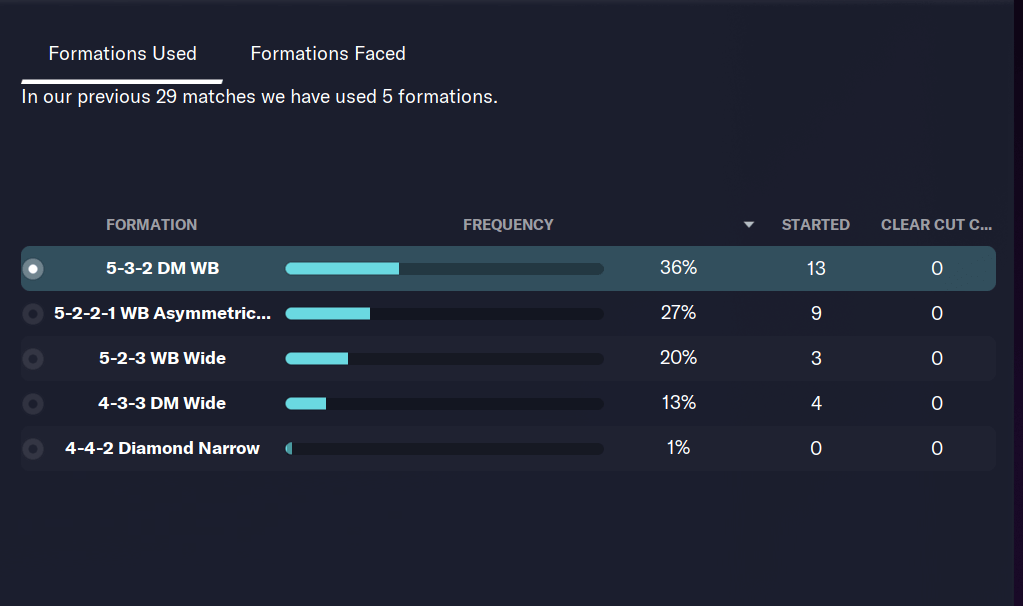 The 3-5-2, or 5-3-2, seems to be the formation we have finally settled on. It provides a great balance between central and wide play, especially in possession. As for the instructions and tactical style, we have remained the exact same regardless of the formation. This sees consistency in our principles of play, which have clearly been effective as we will see in the statistical analysis.

Nonetheless, the 3-5-2 has been the answer to most of our problems. The two wide centre-backs are responsible for attacking the wings and creating wide overloads with the wing-backs. In the midfield, Jorginho is the deep-lying playmaker behind a balanced duo of Mason Mount and Conor Gallagher. Up top, one of the centre-forward is more of a deep-lying forward instructed with coming deep supporting possession. The other one is a basic advanced forward tasked with maintaining depth and making runs into space. 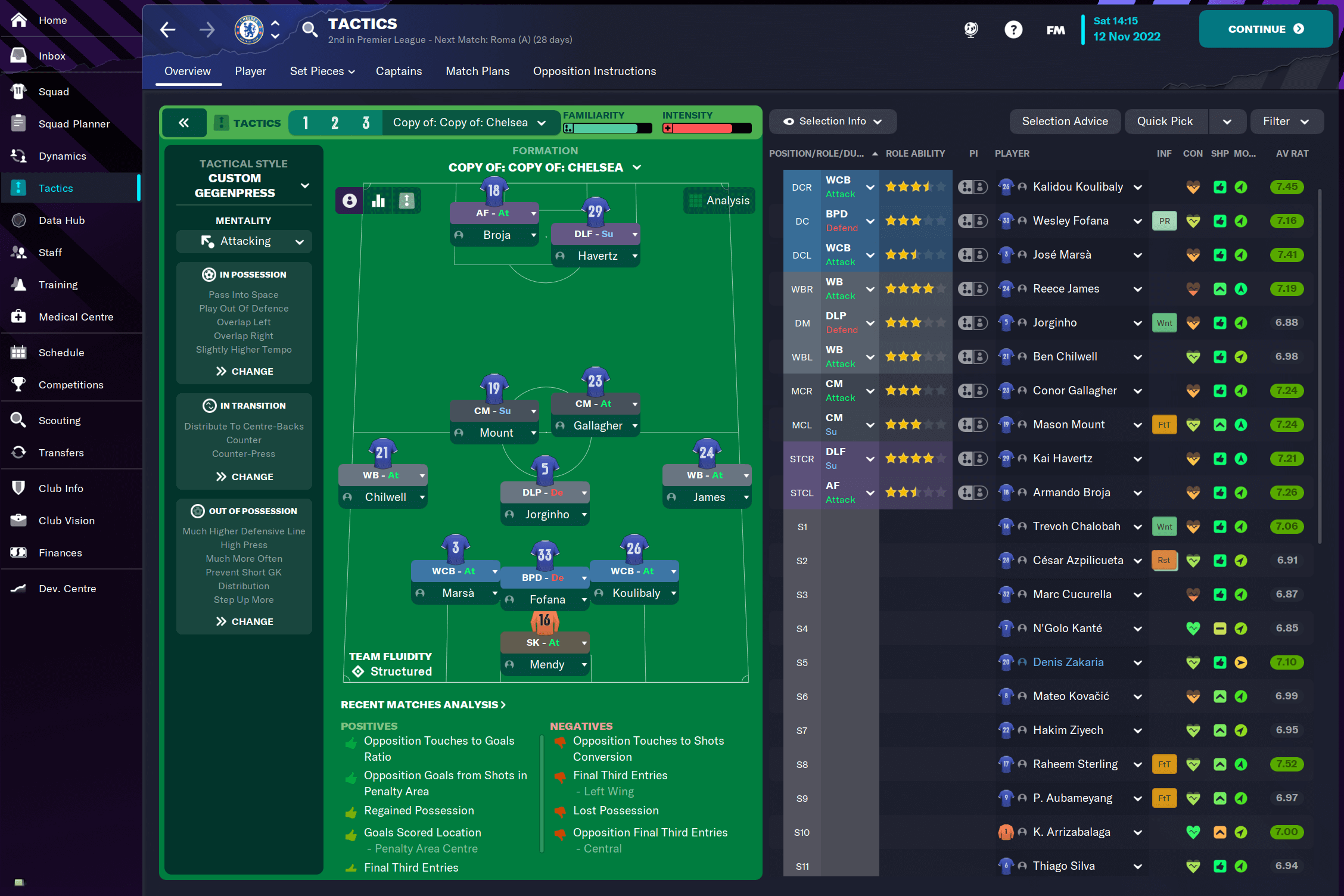 The other formation we used in these four months has been an asymmetric 3-4-3. This is a slight variation of the 3-4-3 we initially used, but now with Mason Mount as a right-attacking midfielder rather than a right winger. Especially in the beginning, we found great success in this shape, but it did not come with much consistency. 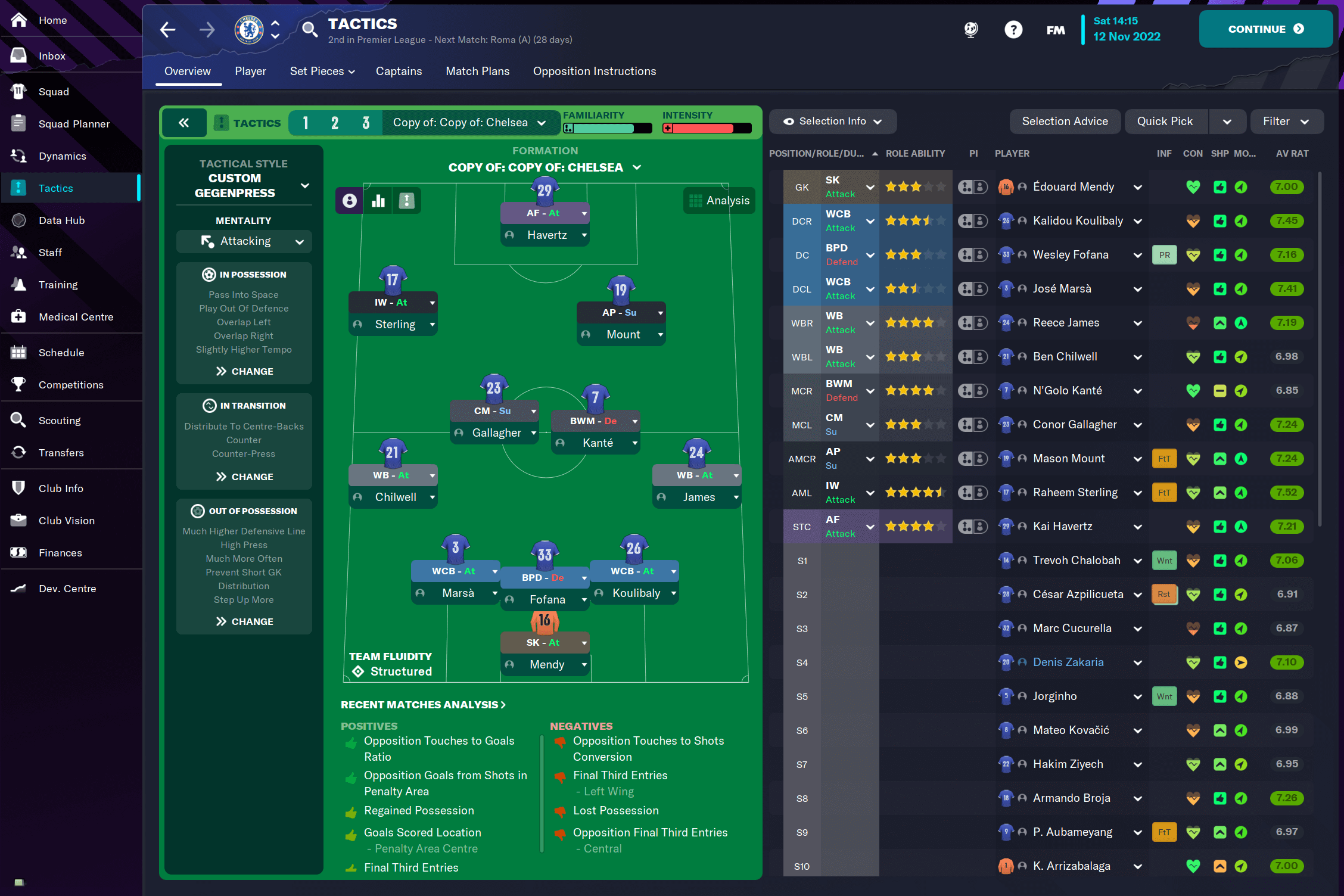 The other formation we have frequently used is a regular 4-3-3, which combines the best of the 3-4-3 and the 3-5-2. This variation has been especially useful in games where the opposition’s wingers seem to be doing a lot of damage, and a back four is better suited than a back three. Again though, we have been extremely flexible with the roles and duties in each and every position. 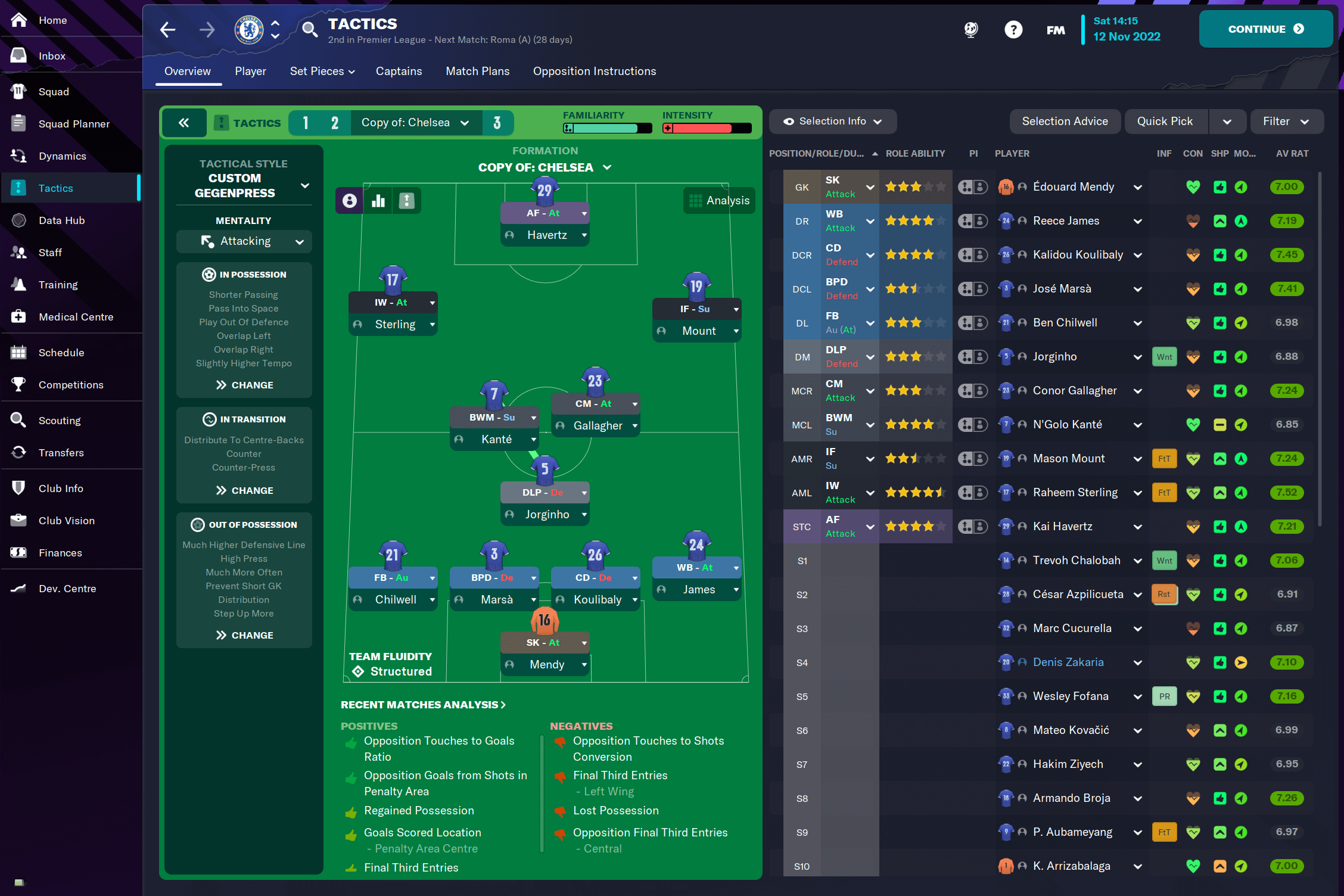 After a couple of months, it is clear we are best suited to use multiple variations and formations rather than have a default one. This approach allows us to constantly adapt to the opposition with prepared game plans and flexible structures. Our playing style has remained the same throughout though, as we will take a look now.

The data hub provides us with straightforward graphics and statistics so we can have a detailed idea of how we are performing. It has been extremely helpful as we look to constantly make tactical developments without wishing to affect our efficiency. It essentially provides the blueprint and becomes the guide as we navigate through the season.

One of the most straightforward graphics in the data hub is the general performance pie chart, which contains general information in and out of possession. We are clearly doing well with the ball. Our lower pass completion ratio is a sign of our direct approach, which sees us score 2.38 goals per 90 from 2.07 xG per 90. Without the ball, we have been just as effective. We have only conceded 0.88 goals per 90 from a very low 1.04 xGA per 90. The lack of difference between the xG figures and the actual goals is also a good sign. 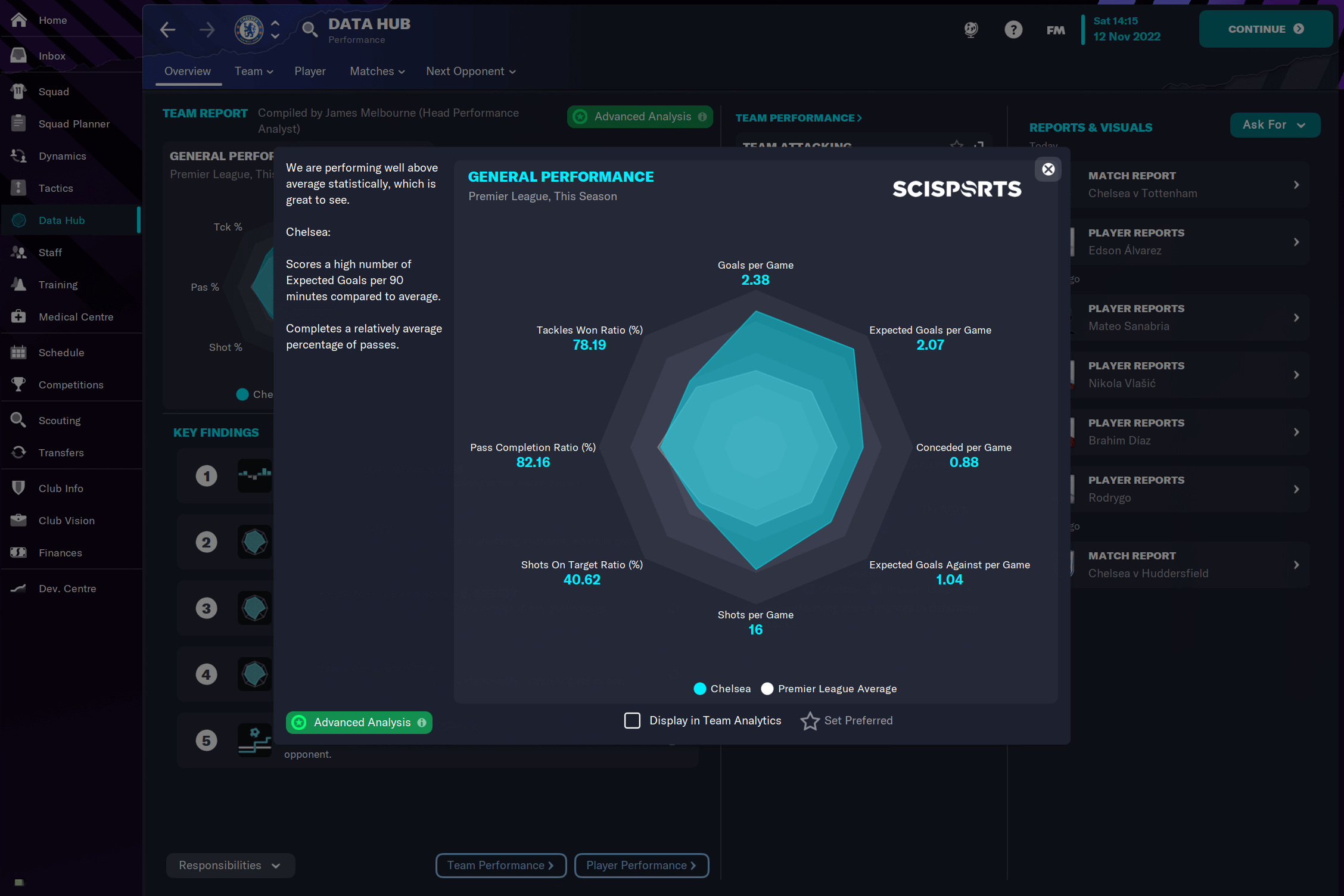 The pass map provides a further look into our general playing style. Against Tottenham, we lined up in our 3-5-2, as seen below. The midfield is quite interesting, as Kovačić adopts a much deeper role than Gallagher, who roams forward with success. The focus on the left is also worth a mention. José Marsà has been a great signing, with the 20-year-old already being one of the key pieces in the way we attack.

Overall, we are able to see a more direct playing style through the pass map. The structure is vertically stretched, and the passing combinations are generally not that strong. We only rank sixth in possession, but third in goals scored. 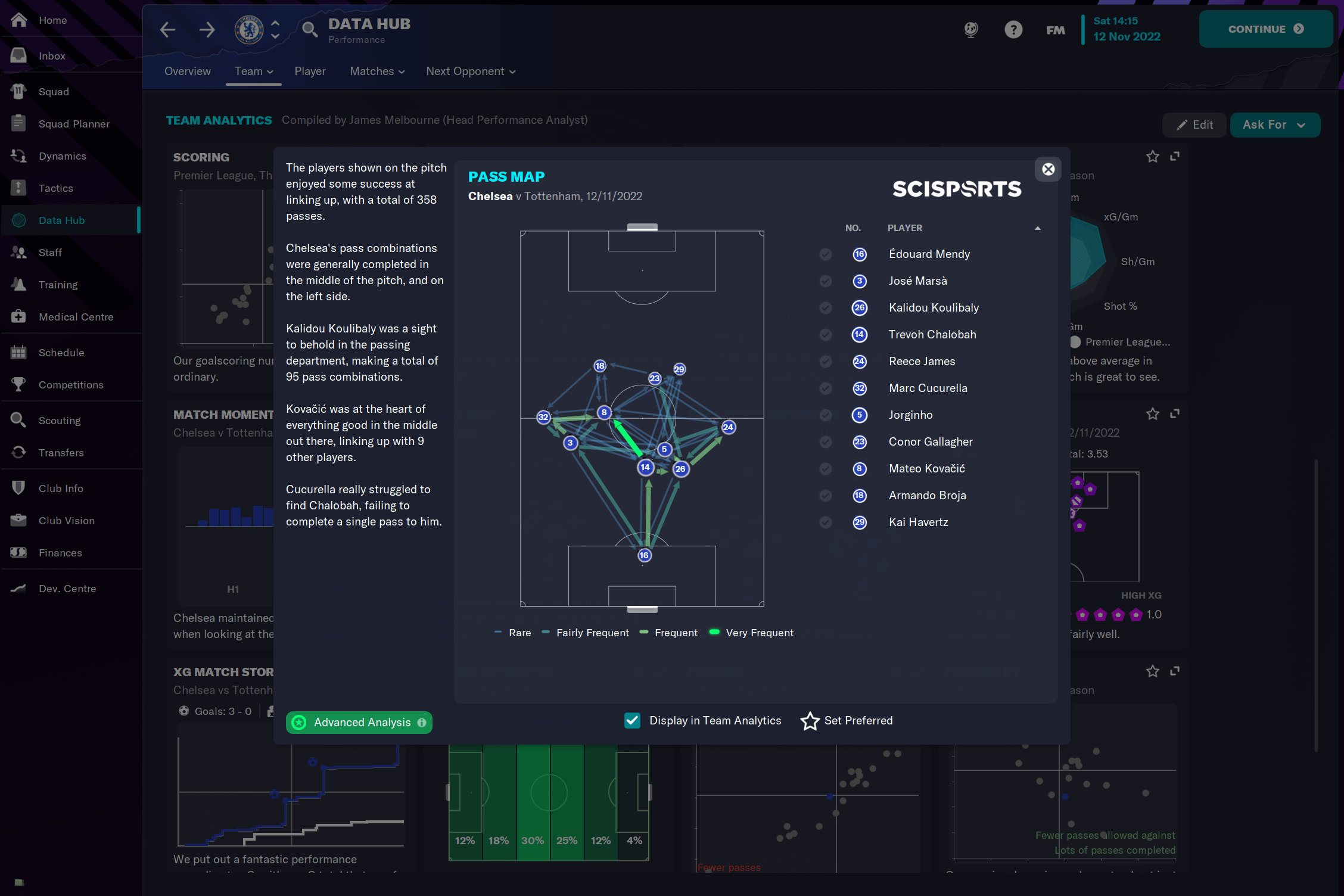 This possession approach can be further illustrated in the graphic below, which looks at passing efficiency. We rank exactly average in both of these metrics, far from the likes of Tottenham or Man City. Our passes attempted are not that high and neither is our completion rate. 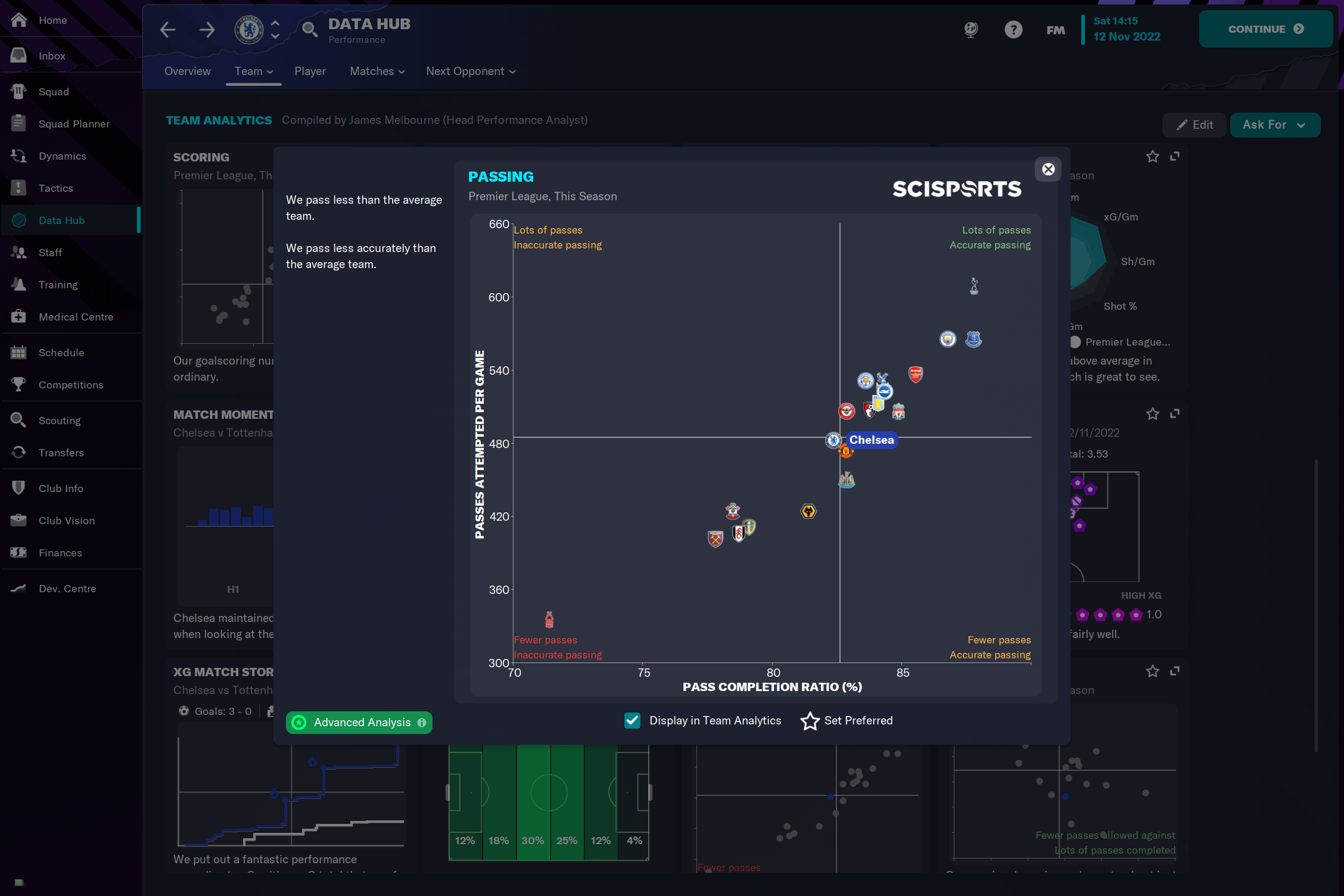 Nonetheless, when looking directly at xG and xGA per 90, we rank among the best in the league. We rank towards the optimal top-left corner, only behind Man City and Liverpool. We have been superior in most of our games, and it has rarely come from dominating possession. We defend well when we have to and attack with success when we have the ball. 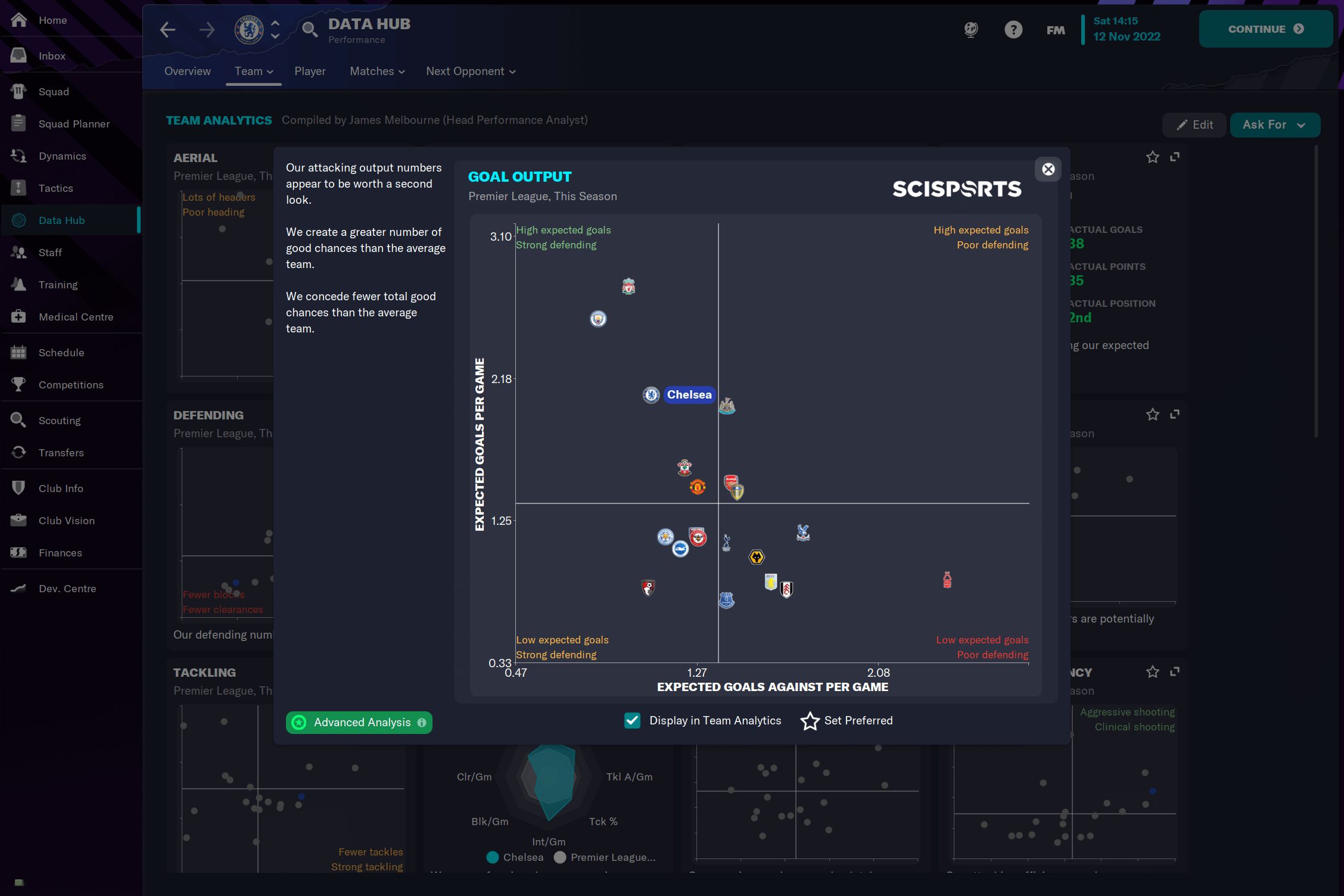 Despite only being four months into our first season with the Blues, it feels like a lot has already happened. Going into the second half of the season, we will work towards more consistent results in order to meet our expectations in each and every competition. In the UCL, we have a tough challenge in Real Madrid. In England, we are simply trying to keep up with Man City and Liverpool in order to qualify for next season’s UCL with ease. The cups, however, are our chance for some silverware in this first season.