Preorder Football Manager 2023 through our friends at Fanatical and get 30% off by using the code FM23DAILY.

The modern-day role of a striker has completely changed. 20 years ago, a striker’s job was simply to score goals. Nowadays, they are the first line of defence and almost facilitators for the wide players. The roles have reversed. Other than Erling Haaland, who I’m convinced is inhuman, there is a real lack of out-and-out goalscoring number nines.

Look at Liverpool in recent years, Roberto Firmino has been a favourite of Jurgen Klopp’s, despite only managing 15 goals in his most prolific season. Firmino is not a goalscoring striker, but in Klopp’s system, his role was to create space for Sadio Mane and Mo Salah, a role he executed perfectly. It is no coincidence that Darwin Nunez, a completely different profile to Firmino, has come in and struggled to play a similar role.

Even the third-highest goalscorer in Premier League history, Harry Kane, has taken up more of a creative role in recent years. Dropping deep, supporting the midfield, and picking the eye of the needle passes through to Heung Min Son which has seen them become one of the most prolific partnerships in the Premier League era. 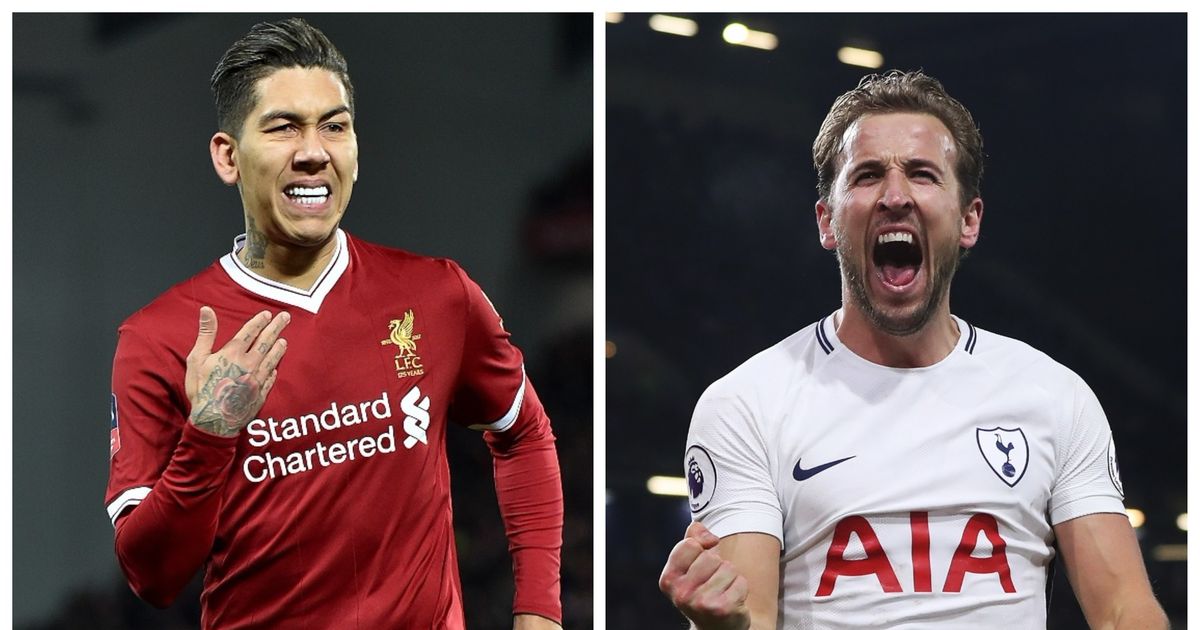 This adapting role of the striker has been recognised by Football Manager too, as there is an abundance of different forward roles to choose from. Whether you are looking for a fox in the box (poacher), or a forward to chase down every loose ball (pressing forward), there is something for everybody on FM. As cliché as it sounds, goals win you games, therefore it’s imperative to select the right system and roles to create plenty of opportunities.

Somewhat of a dying art in the modern game, but in recent FMs, a quality target forward has been a bit of a cheat code. I have had huge successes with a target man tactic in lower leagues and also with sides competing in the Champions League. For those of you that are planning on completing a journeyman save on FM23, you will no doubt encounter a few target forwards during your reign.

In this article, I will dissect the target forward role on Football Manager 2023, outlining their purpose, their key attributes, and some suggestions on how to best incorporate them in your tactic.

So, I’ve raved about the target forward and the impact they can have on Football Manager 2023, but what is a target forward? Like with all roles in the game, Sports Interactive provide their own description of the role, which considering they are the people responsible for coding the game, you should probably pay good attention to. 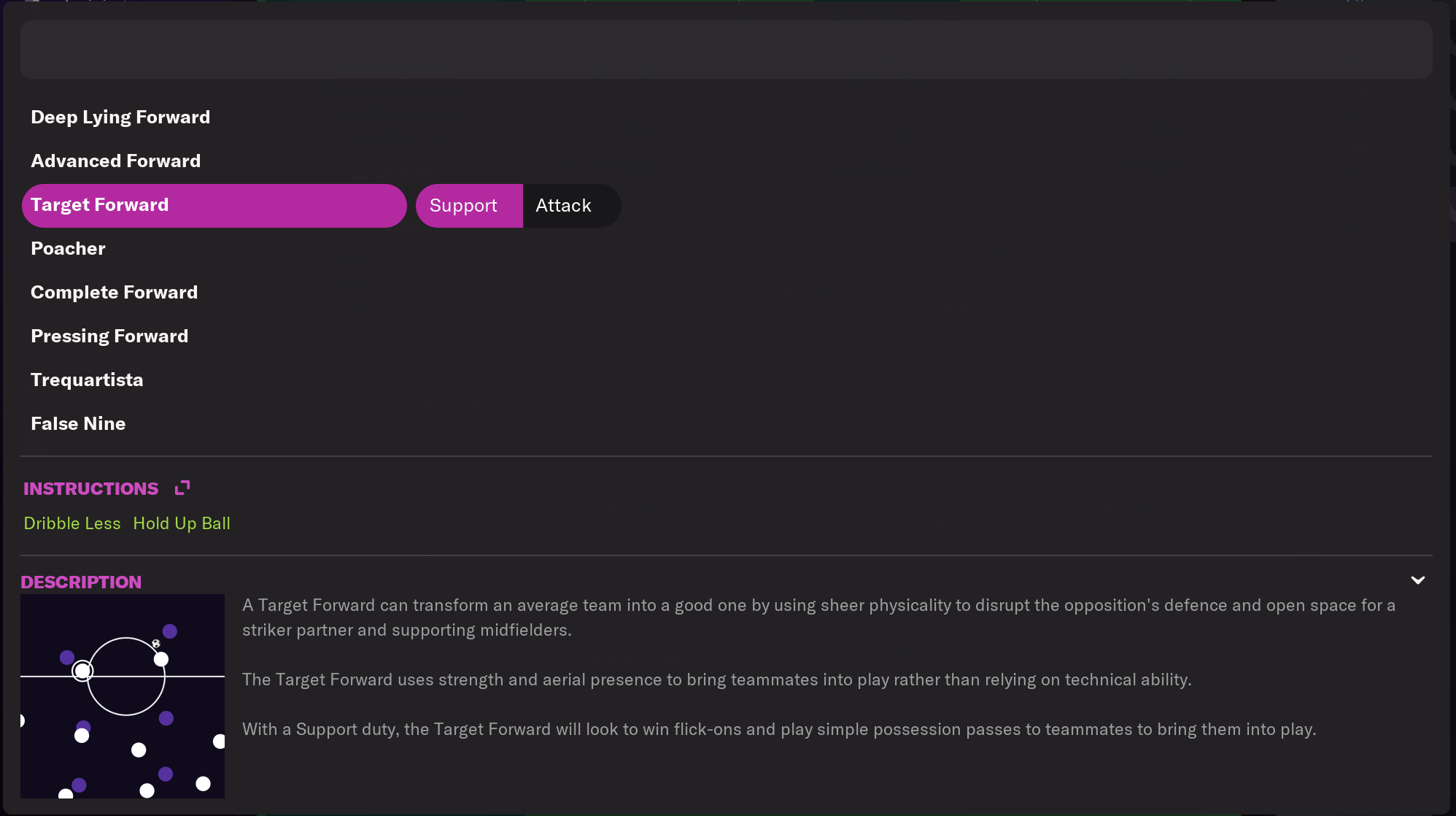 A target forward can transform an average team into a good one by using sheer physicality to disrupt the opposition’s defence and open space for a strike partner and supporting midfielders. The target forward uses strength and aerial presence to bring teammates into play rather than relying on technical ability.

Weird isn’t it, a striker’s description not mentioning anything to do with goals. That’s because the primary role of a target forward is to hold the ball up and bring other players into play. They will be in and around the box when the ball is out wide, but they aren’t a player that will run the channels or burst past the last line of defence.

When I think of target forwards, I think of Olivier Giroud at the 2018 World Cup. We all know he ended up with a winner’s medal, but I bet you didn’t know that he failed to score a goal at the tournament, or even manage a single shot on target, as France’s main striker. That’s because he was a facilitator, creating space for the likes of Mbappe, Griezmann and Dembele to exploit. A role that he fulfilled perfectly.

I think there is a false perception in football that a target man is just a lanky lump that happens to play as a striker. Whilst the height helps, the role requires a specific skill set. Like with all positions, there is a range of different attributes which help dictate a player’s suitability for the target forward role on FM. Basically, you need Edin Dzeko.

Age is not necessarily on the Bosnian’s side, however, his attributes on FM22 are a perfect fit for the target forward role. At 6’4”, with excellent jumping reach (17), strength (17) and bravery (15), Dzeko has the physical attributes required to play as a supporting striker.

As the focal point of the attack, the target forward’s role is to open up space for the players around them, making their anticipation (18) off-the-ball (14) movement attributes extremely important. Those who don’t have a high rating for their off-the-ball movement are unlikely to be as effective as a target forward, as there will be fewer spaces created for teammates to exploit.

With the role having a more creative focus than say a poacher, the ideal target forward would also possess good decisions (16), first touch (16) and teamwork (17) attributes. Premier League fans will have to look no further than Brentford’s Ivan Toney to see how important the creative side of the role is. Toney is a natural goalscorer, but his creativity and link-up play are also exemplary, with Bryan Mbeumo often the beneficiary.

In Football Manager, you have player attributes which indicate how good a player is at a specific skill, but you also have player traits. A player’s traits are actions that they are more likely to perform in a match. They have no bearing on the player’s ability, however, they can enhance a player’s performance in a specific role. Each role in the game has both complementary and conflicting player traits or tendencies, and the target forward is no different. Here are the key traits to look out for when searching for your next target man:

Plays with back to goal: As an outlet for your team when under the cosh, the target forward must be capable of playing with his back to goal, holding the ball up and bringing his teammates into play. 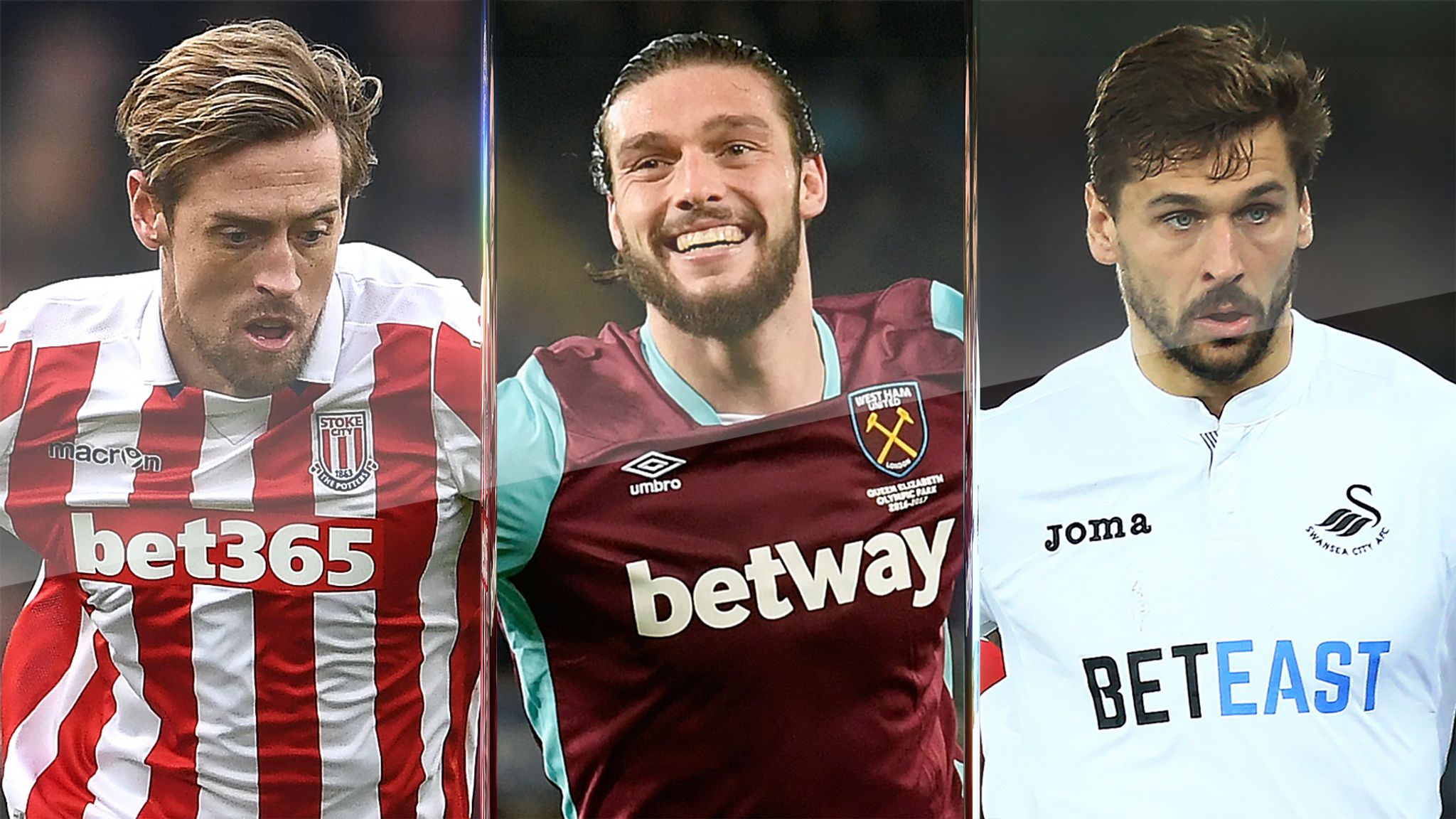 Runs with ball rarely: What do all three of the players pictured above have in common, other than being two metres tall? They can’t run! A target forward is never going to be a player that will dribble their way through a crowd, so training them to not do so makes them more effective in their hold-up play.

Plays one-twos: Having a target forward that tends to try one-twos ensures that they become an integral part of the build-up play. Think of a prime Giroud at Arsenal, having the ball drilled into his feet before playing neat little flicks round the corner to a midfield runner.

Whether you opt to play route one football, or a quick passing tiki-taka style, a good target forward is capable of playing in both systems. For a target forward to thrive on Football Manager, he needs three things: pace in and around him, quality service, and midfield runners.

Here are three ways you could set up using a target forward on support. 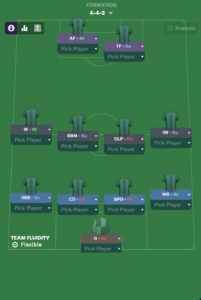 Considered a very basic formation, but the 4-4-2 ticks all the boxes required for the target forward to operate best. On one flank you have an inverted full-back that will tuck inside, allowing the winger to hold his width and delivery crosses into the box for the target forward to attack. A deep-lying playmaker on defend duty, enabling the box-to-box midfielder to break forward and get into the opposition area. Paired with an advanced forward, the target forward will have a striker to lay the ball off to when in possession. 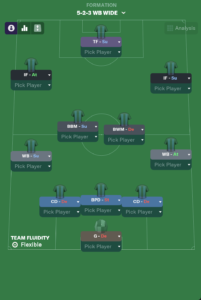 Channelling my inner Antonio Conte here, a 5-2-2-1, or 5-2-3 as it’s labelled on FM, gets plenty of attacking players in and around the target forward without sacrificing the width. The wing-backs will provide the width in attack, whilst the inside forwards cut inside and look to feed off of the chaos that the target forward causes. A ball-playing defender in the middle of the three, with good long passing to play direct passes into the target forward to hold up. Quite similar to how Tottenham play in real life, whether that’s a good thing or not I will leave it to your imagination. 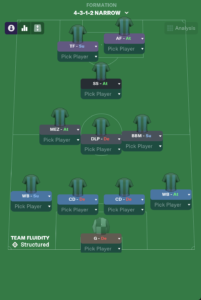 I don’t know what it is about narrow formations, but the match engine in recent editions has struggled to deal with the central overload. From a target forward’s perspective, this is probably the formation that provides them with the most options. The target forward–shadow striker combination has been extremely popular in the past, and the aggressive runs into goalscoring positions are music to the ears of any target man. The wing-back on the opposite side of the pitch will drive forward when in possession, whilst the width on the other flank will be provided by a mezzala, another role which works in harmony with a target forward.

Preorder Football Manager 2023 through our friends at Fanatical and get 30% off by using the code FM23DAILY. This makes it the cheapest price around! Click on the image below...
Read more
© Copyright 2022 - Ronnie Dog Media All Rights Reserved.