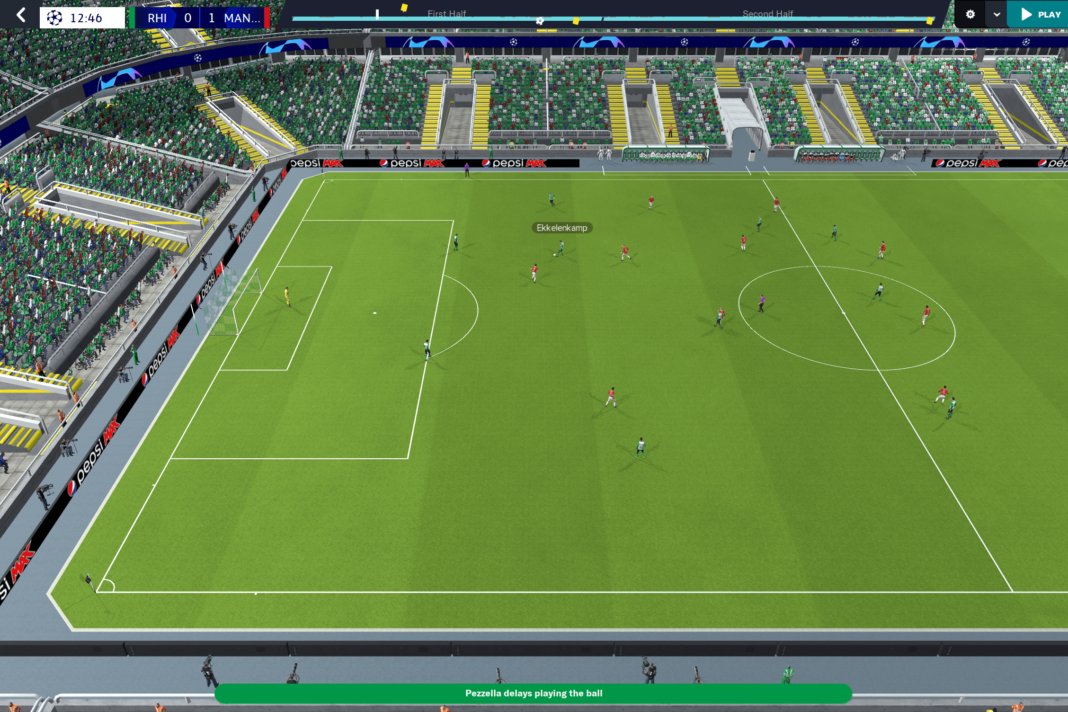 This piece originally featured on our sister site, chelseafcanalysis.com

The quest for glory continues! In this third episode of the Chelsea series, where we aim to turn Chelsea into the most successful club in Europe, we reach the business end of our first season in charge. In the last article, we looked at our performances up until the World Cup break and took an in-depth look at our tactics through the data hub. Just to recap, at the time, we were sitting in second place in the Premier League, and in Europe, we were set to play Real Madrid in the round of 16 of the UEFA Champions League after winning our group.

Tactically, we were still looking to find our style. Through the data hub, we identified our playing style as extremely effective, although we were not one for possession. We were balanced – defending and attacking well. Shortly after though, things took a turn. Although we played well in our friendlies back, we lost to both Roma and Lazio. As January began, we started to struggle with inconsistency. Our success was fading away, and if things did not change, we could kiss goodbye to any sort of progress in our first season. With my back against the wall, I decided to change everything.

In this article, we will explore the new tactical direction we are heading in, looking at what has changed and how we are playing. The focus of this episode is on the tactical side of things, and our tactical development in this first season. In the next one, with the season wrapped up, we will provide a complete season overview and plan our transfer activity for the summer window – spoiler alert, a lot is going to change.

As our results (and our performance) began to slip up, I started to look for answers. On the surface, managing from game to game, it was clear we were starting to lose control. We were never one for possession. By control I mean, we simply created high-quality looks without conceding many opportunities. This was slowly beginning to change, and I could not figure out why. Our tactics were the same, so what on earth was going on?

In the data hub, under ‘team’ and ‘analyst report’, you can find a detailed look at everything formation related. In this section, you can opt to view formations used or formations faced. Under the formations faced, I started to find some answers.

In our previous 50 matches, we faced 10 different formations. 68% of the time, these were formations with a front three. Although we were ahead in the clear-cut chances department, it wasn’t by much. We were using three at the back, and as we were more of a transition/vertical team, the opposition’s wingers were often causing us trouble. Without much to lose, I decided it was time to change the formations up a bit and see if I find any luck. 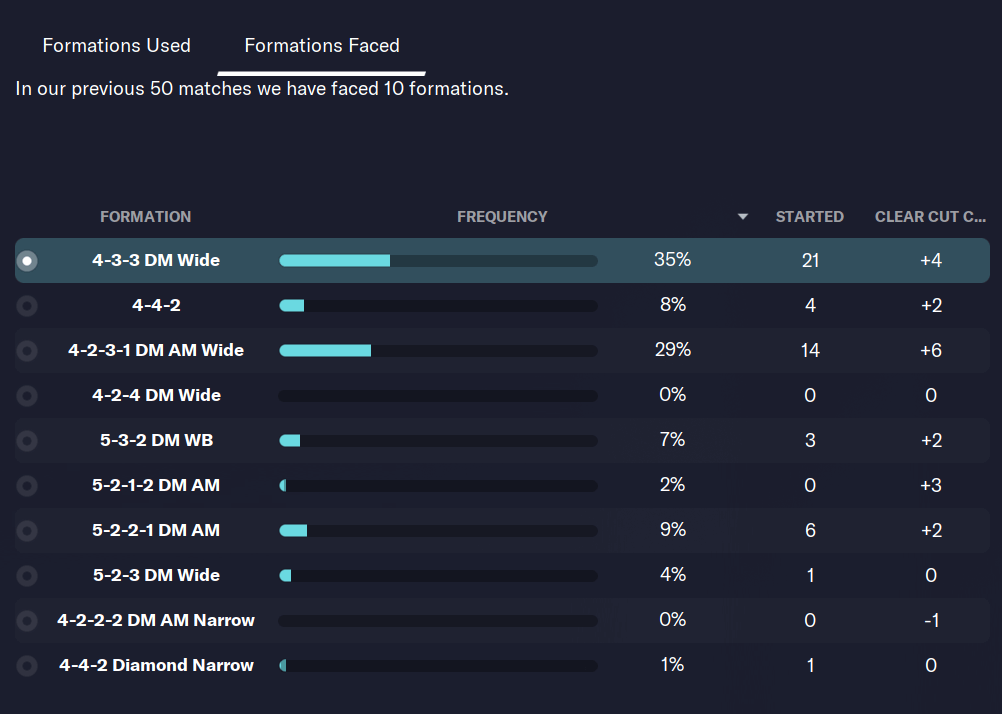 I hit the jackpot. Below, we can see the same information as above, now for formations used. Our clear-cut chances difference for the 3-at-the-back formations was awful! One of them was in the negatives and another at zero. The best one was two. Simply unacceptable for a club the size of Chelsea.

This made up my mind, it was time to change to a back four. We resorted to a 4-3-3, looking to take advantage of the quality we have in the midfield. In January, I also went to the market for two wingers – wait until the next episode to find out who. Anyway, our 4-3-3 proved extremely successful. A few months later, our clear-cut chances difference for this formation is up to 17! 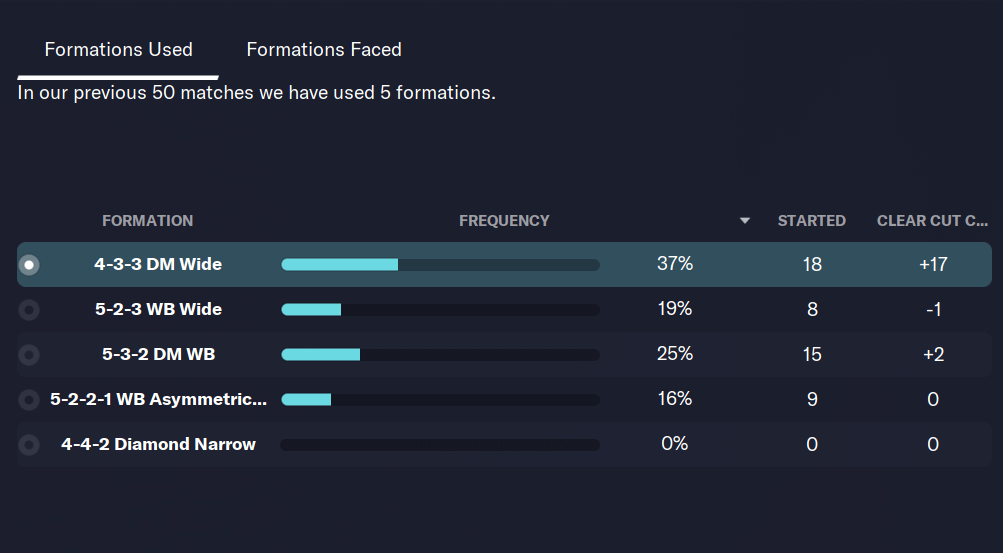 What else was going wrong?

In both my Chelsea and Man United save, Aston Villa have really annoyed me. They managed to beat me in both saves, and they always prove to be an extremely difficult game for some reason. At any rate, we can use the data from our 2-1 Villa loss to take a deeper look at what was going wrong.

To begin with, our average positions showed how static we were. Personally, I’m not a big fan of perfectly symmetrical and systematic structures. I like spontaneity, natural advantages, overloads, imperfections! Personal feelings aside, this wasn’t working. In the game, we were struggling to progress and create. We were far too easy to defend. 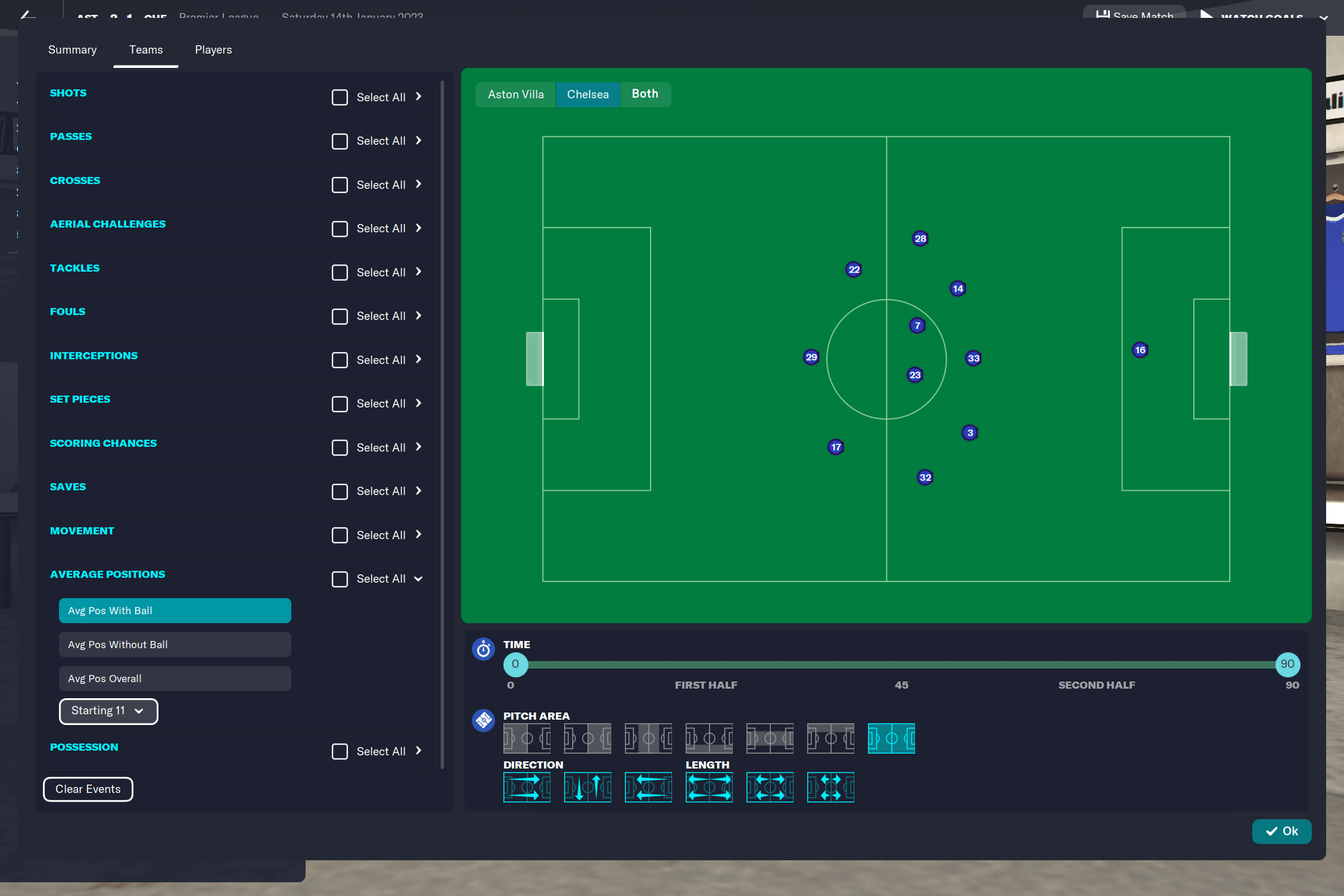 As we can see in the heatmap below, we were extremely wing-focused. However, with just two midfielders, providing support from the midfield while maintaining some security was impossible. Our wide play was far too predictable and inefficient. We rarely explored the central areas, especially in the opposition’s half. All of this was largely due to the formation and our player instructions. 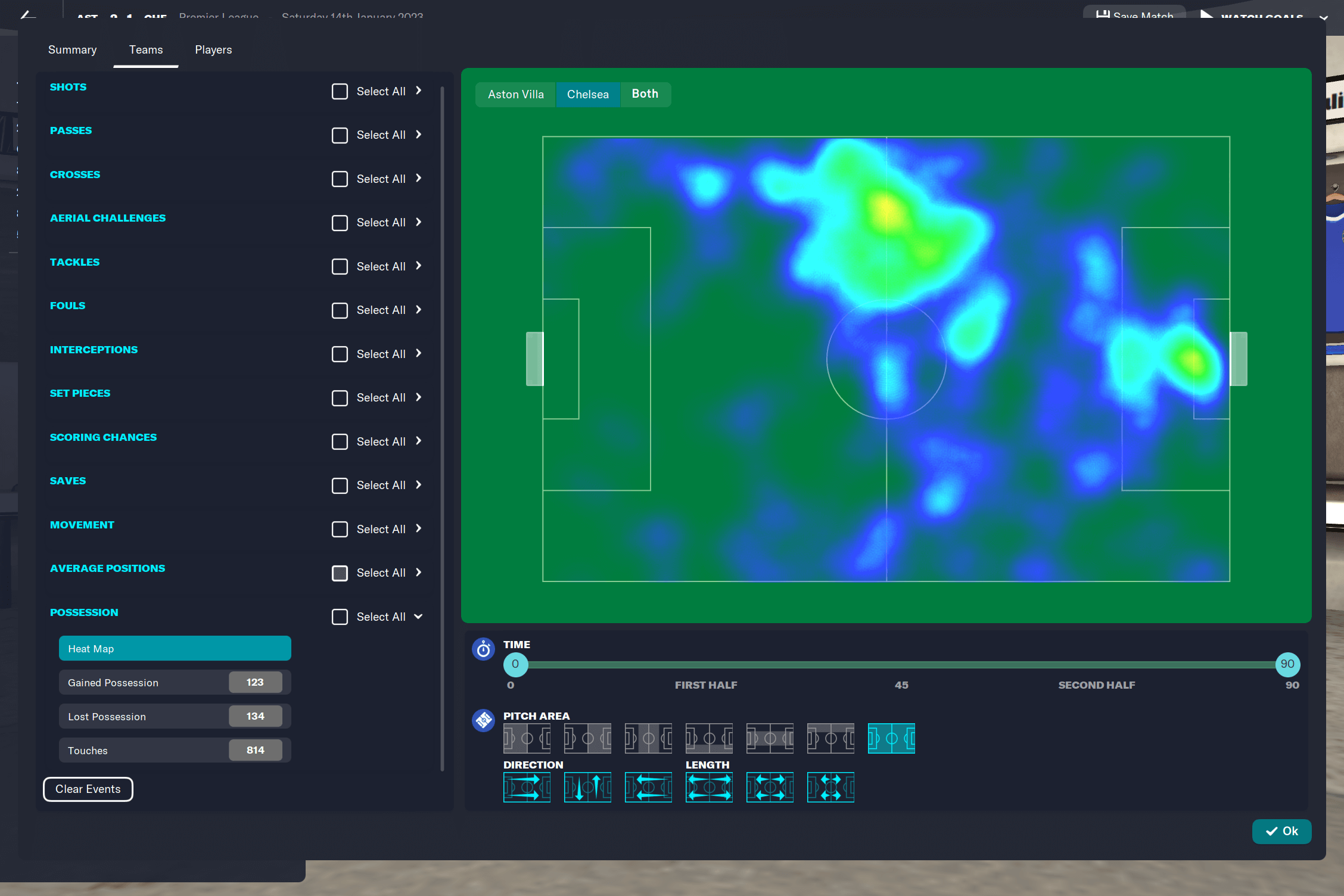 Finally, our pass map further emphasised this narrative. Look how little action there was in the central areas, especially in the build-up! This lack of variety made us a one-trick pony, a predictable team. This might have proven effective in the first few weeks of the game (it did), but as the season went on, it became more and more inefficient. The first order of business? Change to a back four. We went for a 4-3-3, because, as we mentioned before, it made our quality midfield the heart of our structure. It’s not worth going through all the player instructions and whatnot, because depending on my team selection, I change them anyway. The main change was our behaviour in possession. I instructed the team to be more patient and retain the ball more. Our possession figures shot up, and so did our control of the game.

We started catching on form and getting some great results, just in time for the Real Madrid tie. In the first match, we drew 2-2 away – not a bad result at all. A few weeks later, at home, we convincingly beat them 3-0! Not only did we double their xG, but we controlled possession with 55%. Our new tactical ideas were starting to shine.

In this match, the average positions tell a different story. Although we used a 4-3-3, it is completely asymmetrical. The wingers are more narrow, and on the right, Hakim Ziyech is linking up extremely well with Mateo Kovačić. Conor Gallagher sat much deeper than Kovačić and performed as the link between defence and attack. 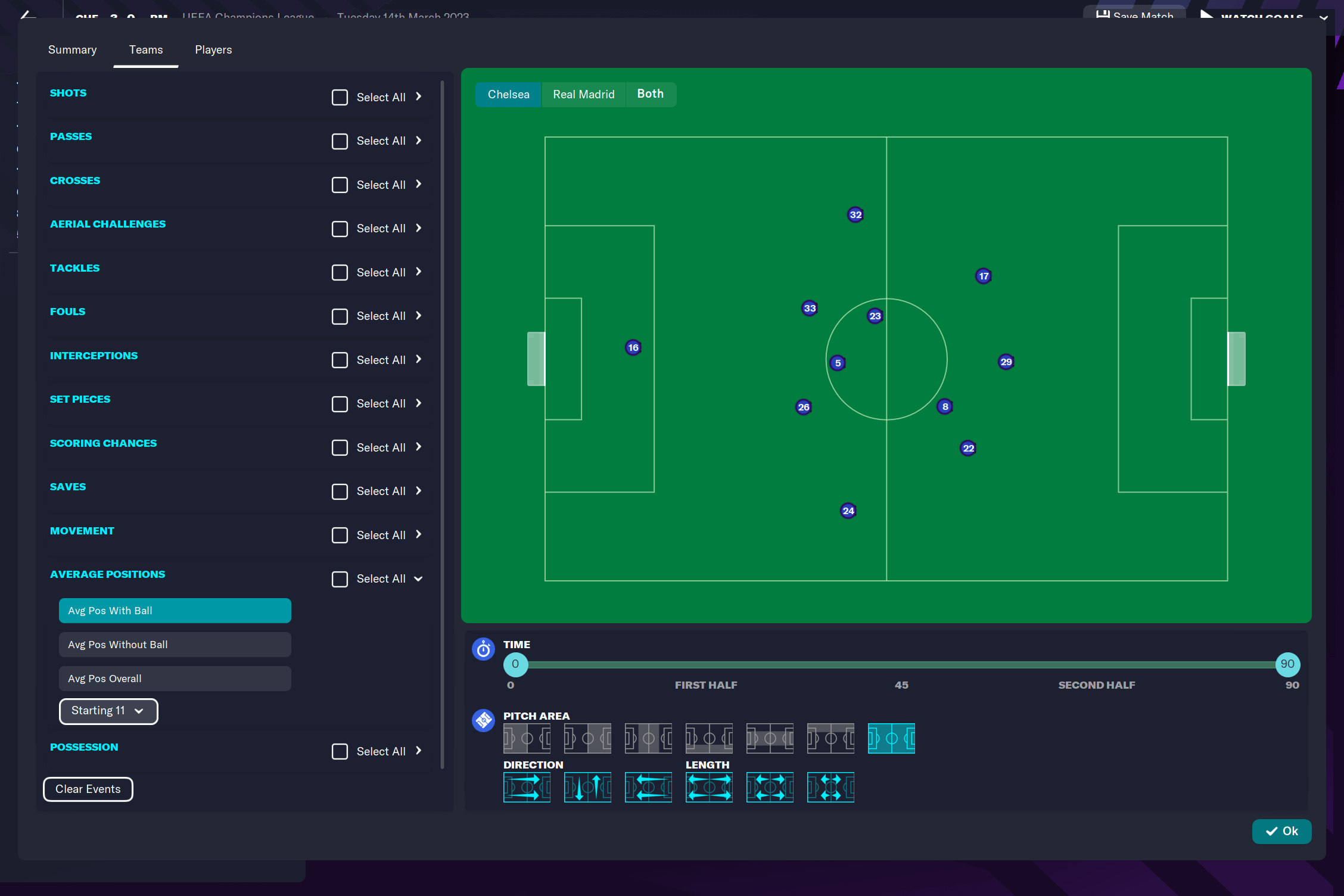 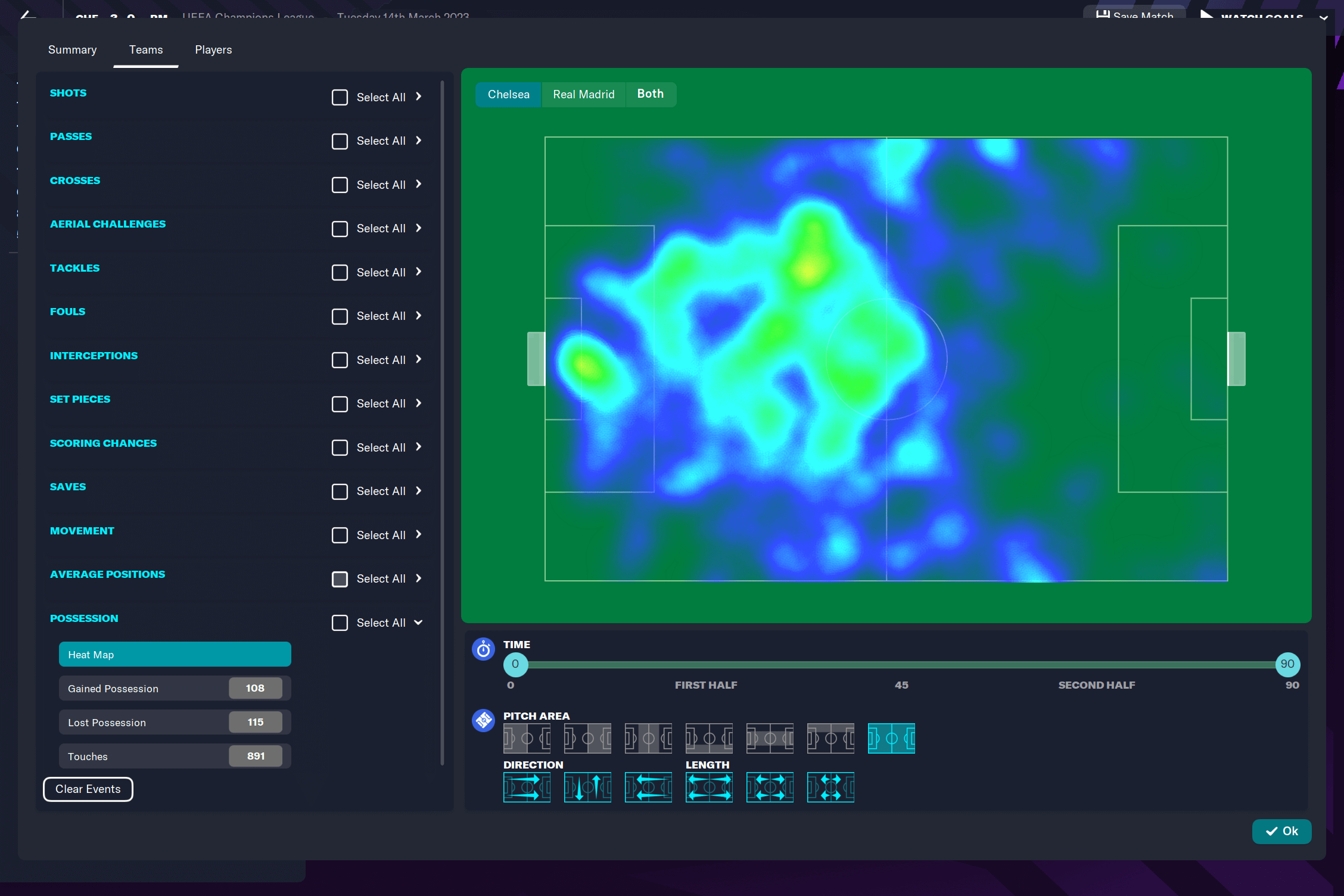 Our pass map provides a final illustration of this new attacking system. The volume is drastically higher, and the balance in this map doesn’t even compare to the old one. We are attacking through every channel and combining much more. Whether out wide or centrally, we are able to create numerical superiority and progress through the thirds in a much more controlled manner. Before, it was just vertical attacks through the wide channels. 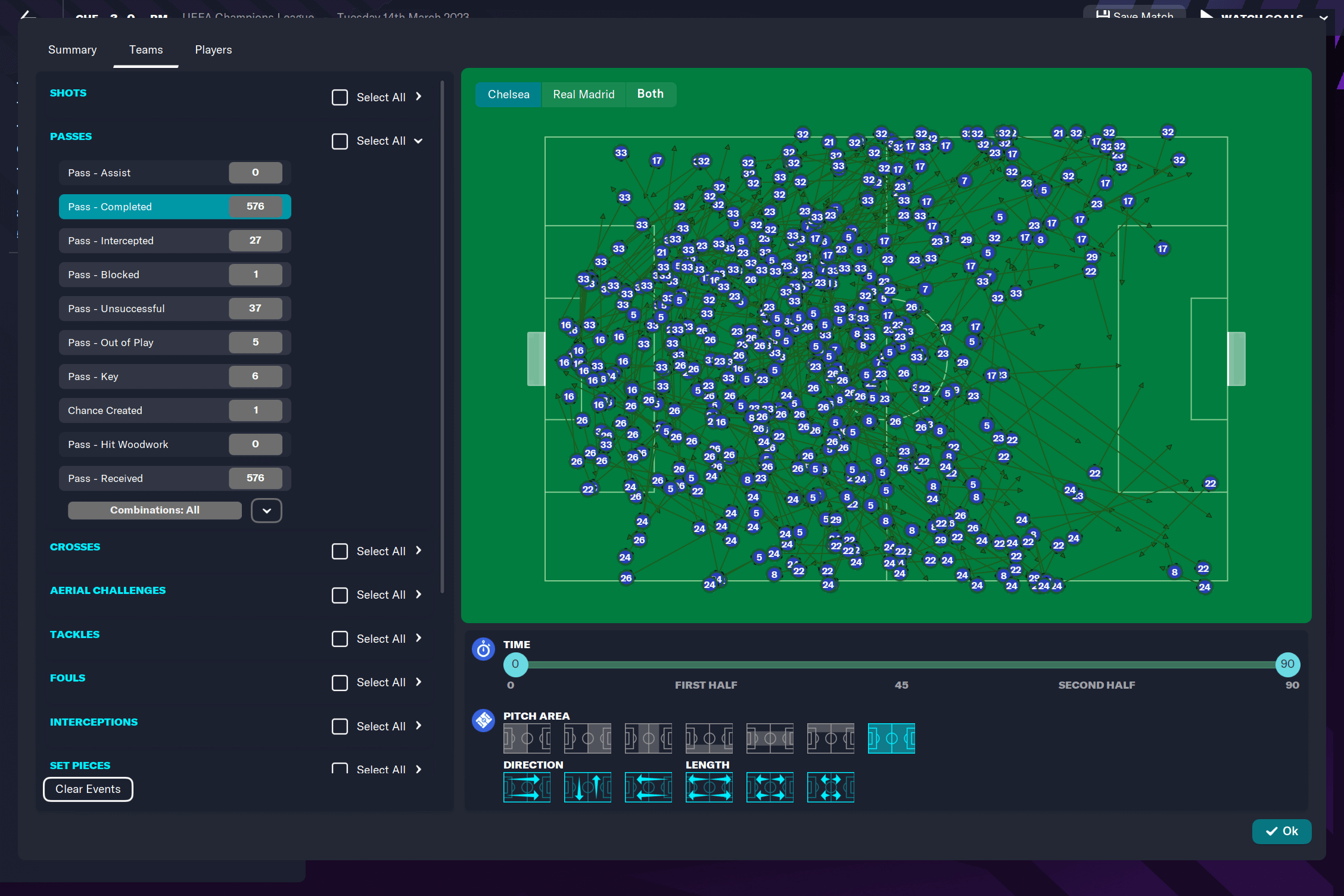 We have gone through a complete tactical revolution mid-season. After a fantastic start, our performances began to slip up, and so did our results. With my back against the wall, I started to look for answers. It was clear the tactical landscape in England wasn’t in our favour, but most importantly, our original tactical ideas were not sustainable. Football Manager is an extremely intelligent game, and with time, the AI will catch up to your tactics.

I used the match analytics for key matches to visualise and identify what was going wrong. Looking at the various maps, it became quite obvious. I changed our structure to a 4-3-3, and I also changed our approach to possession. Going from a more direct ‘heavy-metal’ system, we are now much more controlled and patient. This has resulted in a lot more possession, but most importantly, much more control of the games. In the next episode, we will wrap up our season and prepare for the future, because it certainly is promising.